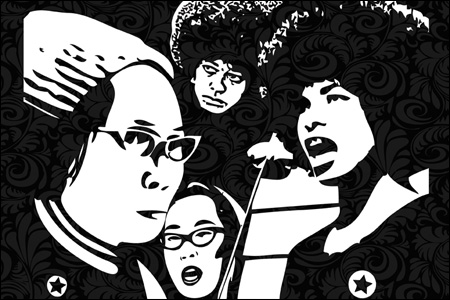 What is so striking about this film is its living history lessons, the breath of singular and plural movements, the shared hue-manity and generations present in the room with subjects Yuri Kochiyama and Angela Y. Davis. Great orators in the traditional and epic sense, they are women with big hearts who have endured personal suffering and survived – like the mythical phoenix that rises when we aren’t looking. This is what “Mountains That Take Wing” delivers.

It is not a random history lesson at all – evident in Yuri’s index cards or typed sheets when she speaks. What makes a heroine – is it humility or laughter? – Davis and Kochiyama have both and so much more.

World War II, Vietnam, Iraq and Afghanistan – Korean war, Japan’s atrocities against the Chinese and Indonesian women known as Comfort Women – the embargo against Cuba, even the Abraham Lincoln Brigade – they offer insights on them all.

We learn of the Rosenberg children after their parents were executed as spies from their classmate Angela Y. Davis. We learn of El Hajj Malik El Shabazz’ international work and how his alliances crossed racial lines from his friend and pen pal Yuri Kochiyama.

The revolution coalesces and expands between these women’s shared histories and overlapping legacies – Davis’ meeting with El Hajj Malik when he spoke at her university, where she was one of a handful of African American students. We learn of her mother’s early influence on her life – her parents’ lessons about the world as they supported her organizing discussion groups at her church, which was bombed.

Terrorism is not an abstract concept. Rather it is all too real when the FBI knock on Yuri’s door and take her father, just home from the hospital where he had surgery, away to prison, where he dies 16 days later.

Terrorism is all too real when Davis talks about going underground, when she talks about her friendship with Comrade George Jackson and when she wonders if when the coalition formed to free her from prison meets this “Angela Davis,” about whom myths had been made, will find her disappointing.

The film captures the love and admiration the two women hold for each other. Yuri is gracious and fiery and so is Angela – it’s surprising the film doesn’t blow up the camera. The directors captured precious moments with Davis speaking about freedom and her politics and Yuri as well, that is, speaking about her early political education teachers. One can hear the admiration in Davis’s voice for Yuri – probably because, coming along a bit later, her relationship might have been a lateral one, housed between the pages in a book, whereas Yuri, now 88, was there.

Art and politics, music … the women cover it all. Well, not all. There might be bonus chapters when the work goes to DVD. However, in the meantime, this film is a classic, the way “Assata” by Assata Shakur is a classic. Professor Thelwell’s book with Kwame Ture, “Ready for Revolution” is a similar classic, as is “Still Grazing” by Hugh Masekela and Amiri Baraka’s latest, “Digging: The Afro-American Soul of American Classical Music.”

These authors, like Yuri and Angela’s lives, have crossed so many movements, so much history, yet their persons illustrate how it is possible to change the world. One person really can do something to right a wrong. One person is really all it takes to start a movement, and women are an integral part of Black liberation movements and justice movements nationally and internationally.

“Mountains” says to its audience one doesn’t have to remain quiet with hands folded. “Mountains” not only are mobile; they fly.

Can one imagine a mountain flying? The film takes place between two meetings: 1997 and 2008. Archival footage, posters and other art fill in where the conversation leads – the journey always exciting and inviting. This is certainly a film – a precedent setting film – one does not want to miss.

We can only continue to look forward. “Mountains” screens Friday, Sept. 24, 7 p.m., at the EastSide Cultural Center, 2277 International Boulevard, Oakland. Both Angela and Yuri will be there, so be sure to come early.