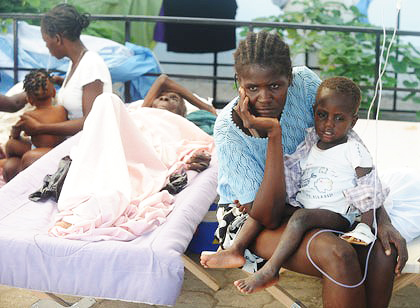 According to Haiti’s health minister, Alex Larsen, cholera “is very dangerous. It can kill in three hours because once the diarrhea starts it doesn’t stop.” Although only five cases have been reported in Port au Prince, Claude Surena, the head of Haiti’s Medical Association, told AP, “The concern is that it could go from one place to another place … and affect more people.”

Either foul drinking water or food that’s been cooked in contaminated water is killing a new crop of Haitians, giving them cholera while donations that could have provided permanent clean drinking water are collecting interest for the thousands of charity organizations making a business out of poverty and the earthquake in Haiti.

The cholera epidemic just killed 250 Haitians and over 3,000 more are infected and may die. This cholera is caused, one report says, by drinking dirty, toxic water. Another news report maintains that this is the first time that cholera has been found in Haiti and this cholera epidemic most likely  was imported to Haiti by a healthy carrier after the earthquake.

Haitians in the Diaspora and their supporters ought to get together and purchase and provide this sort of environmentally conscious water purifying unit (MaxPure-01) or a similar mobile system that will provide purified drinking water, communication and electricity, all in one.

We should not be looking to the NGOs, the Haiti oligarchy, the Haiti government, Papa Clinton, Paul Farmer or the U.N. to help us save our people.

We’ve had 10 months and much more of such “help” and ought to know what to expect. The airport is now open; Haitians are not being forced to detour to the Dominican Republic. Those who have resources and skills, especially Haitian doctors, ought to take a lead in providing permanent long term clean drinking water and subsidize Haitian medical services and doctors in Haiti who need help and who were put out of business by the free earthquake relief emergency assistance.

The Haitian Lawyers Leadership Network (HLLN) would like to make a positive difference but we do not have monetary resources to purchase these or similar all-inclusive water/electricity/communication units for the villagers. Something like this Max-Pure-01 system is what is necessary. We’re coming to the Ezili Network and asking for a partnership with others in the Diaspora, at home and in the conscious community worldwide.

But if you’re looking for the international community to finance permanent clean drinking water for the masses, that doesn’t come from a bottle or purification pill to be purchased from USAID’s profiteering contractors making a killing off the poverty business, you’re too unconscious to help anyone. Kindly don’t contact us with your contributions to “saving lives” while promoting dependency in Haiti. For Haiti’s problems are rooted in “aid” administered in the context of patronage and dependence aimed at perpetuating oppression and exploitation.

But if you understand the poverty business will not leave any permanent good or infrastructure in Haiti, like self-renewing, permanent clean drinking water, because that would make their presence obsolete, then we could work together. We’d like help to mobilize the conscious community to provide self-reliant, permanent sources of clean drinking water for the people DYING in Haiti. Please let us know how we may use the Ezili Network to help.

These environmentally conscious, solar-powered systems, along with bulldozers, tractors and heavy equipment for removing rubble should have already been in Haiti at least within a month after the earthquake. But humanitarian aid is a profit business and though the technology and equipment exist to alleviate the common person’s sufferings worldwide, none of the policymakers with checkbook power are in the business of saving lives unless it’s profitable or meets the U.S. Empire’s incessant resource warfare and big-business interests.

Remember, all the international community will do with this cholera outbreak is suppress the number of Haitians dying in order to make themselves look good because they KEPT the earthquake donations collecting interest in the NGO/charitable organizations’ coffers for “future use.” At least 250 Haitians, not including those dead from the recent rains, but who’ve died of cholera now have NO FUTURE and 3,000 or more are said to be infected.

“Cholera comes from contaminated water or food, often contaminated by feces … Cholera can kill someone within a day … Right now the infection is an epidemic. There has not been such an epidemic in the region for a century,” reports Steve Harrigan for Fox News in Cholera Epidemic in Haiti Highlights Deteriorating Conditions. See also Haiti’s first cholera epidemic in a century kills scores by Rory Carroll in the Guardian of London.

“And the HIV drugs (and now ‘medicine’ and rehydration tablets for Cholera) you have to swallow are also washed down with toxic ground water, in some ways also from U.S./Euro/Canada gold, copper, oil, iridium, uranium, coal, marble, granite, limestone, aggregate and other mining companies who pollute Haiti’s shores and riverbeds.

“Imagine swallowing the nutritional supplements, vitamins, vaccines and the other pharmaceuticals USAID insists are ‘aid to Haiti,’ when you’ve not eaten in four days?” – Ezili Dantò

“When the earthquake hit, many of us who lived through the two recent U.S. coups d’etat in Haiti and the two Gonaives hurricane destructions of 2004 and then in 2008 knew these poverty pimps, knew they would crank up the press releases and telethons and collect and collect and collect, while the majority of people suffer, lose more, grieve and die in Haiti. In our minds’ eye we saw USAID, CRS, CARE, Red Cross, World Vision et al … sad perhaps, but still calculating and salivating at the huge prospects of monies to be collected from the deaths and brutal suffering of Haitians. It’s a profitable gig the poverty pimps are just not about to give up.” 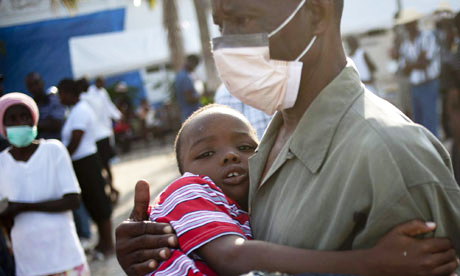 In The Plantation called Haiti: Feudal Pillage Masking as Humanitarian Aid I wrote: “A U.N. report released in March of 2010 said that dirty water kills more people each year than all forms of violence combined including war. According to the WHO (World Health Organization), of the 42,000 deaths that occur every week from unsafe water and a lack of basic sanitation, 90 percent are children under 5 years old … 80 percent of all disease is caused by lack of basic sanitation and lack of clean water.

Four thousand five hundred kids die every day from lack of basic sanitation and water of simple diseases like diarrhea. But, (Lane Wood) said, there are some less obvious impacts of drinking dirty water. For example, dirty water can undermine other humanitarian efforts that money and effort have been poured into, like efforts to control AIDS/HIV in Africa. They’re going home, they’re taking their medicine with bacteria-filled water and their bodies are not absorbing the medicine.” 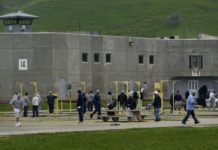