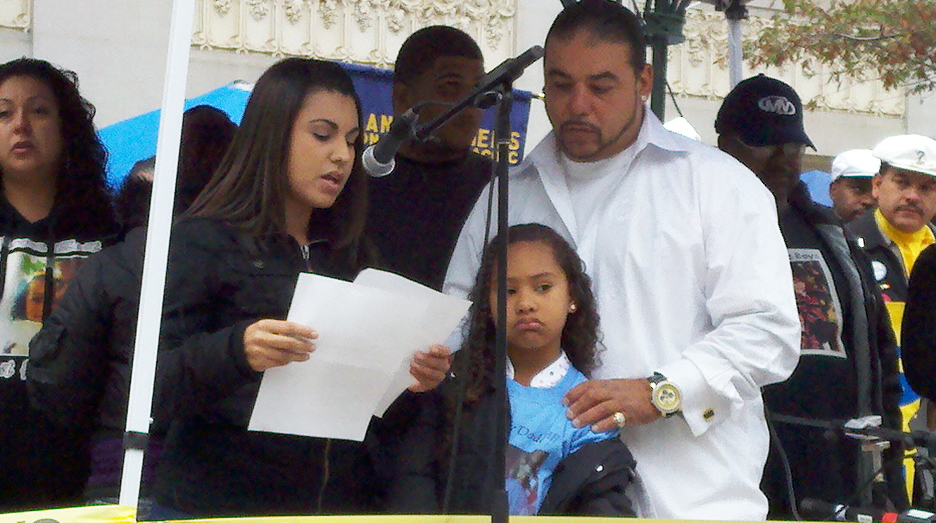 Cries of “An injury to one is an injury to all,” “Justice is an American value” and “No justice, no peace” echoed through downtown Oakland from Frank Ogawa (City Hall) Plaza on Saturday, Oct. 23. The threat of impending rainfall did not deter hundreds of people from showing up and calling out for justice. Longshoremen, warehouse workers, teachers’ union representatives, service employees’ and teamsters’ banners could be seen scattered among signs declaring “I am/ we are Oscar Grant.”

The rally fell just two weeks before the sentencing of Johannes Mehserle, the police officer convicted of killing unarmed transit rider, Oscar Grant. Labor and community activists, organizers and community came together in front of Oakland City Hall to demand justice for Oscar Grant as well as for all victims of police brutality. The significance and historic context of this rally does not simply signify solidarity; it reminds us that the shutdown and work stoppage of the ports in the Bay Area have previously and can in the future be employed as it was Oct. 23 as a tactic to call for justice.

ILWU workers in attendance, whether official spokespeople or not, were quick to point out that there are only four days per year that they normally do not work. That is, unless they meet and agree to withhold work, which they have been compelled to do previously in cases of grave injustice, like the onslaught of the war in Iraq. The upcoming sentencing of the officer convicted of police brutality, which is the ultimate violation of civil rights – murder – is one such instance. 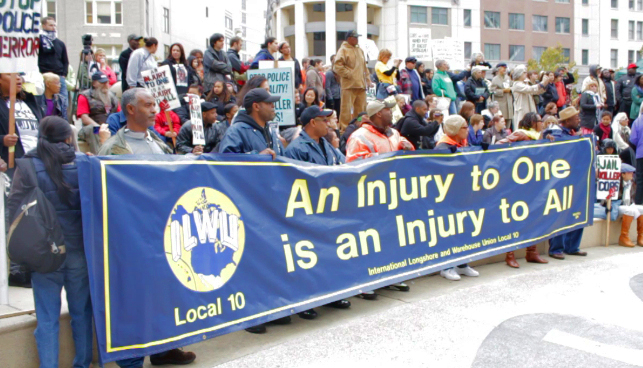 ILWU Local 10 executive board member Clarence Thomas easily and enthusiastically shouted out the name of a half dozen ports where ships were not unloaded Saturday in a substantial sign of solidarity with the family of Oscar Grant.

Various speakers alluded to the idea that the death of Oscar Grant may be the rebirth of a movement to end police brutality. Statements of support read at Saturday’s rally came from the British Parliament and various other international government entities, as well as from Mumia Abu-Jamal, who has been pleading his innocence from Death Row for over 25 years now.

Cheers and fists went up as the audience was reminded to come back out on Friday, Nov. 5, 2010, the date currently on record as sentencing day in Los Angeles for former officer Mehserle, Oscar Grant’s killer. The Oakland rally, “A Day to Honor Oscar Grant,” begins at 4 p.m. at 14th and Broadway for sponsored by the General Assembly, ONYX, ANSWER and others. Contact Cat at (510) 703-1500 for more information.

Rain began to fall, but cries for justice remained until the last speaker spoke as planned.

Oriana Bolden is a community organizer, filmmaker, nonprofit management professional, television news reporter, medical school student, video production instructor, filmmaker and multi-media journalist. She can be reached at hellagetto@gmail.com. This story and a shorter version of the video were originally published by Oakland Local, at http://oaklandlocal.com/article/new-video-justice-oscar-grant-rally-rain-falls-does-not-end-call-rein-injustice.