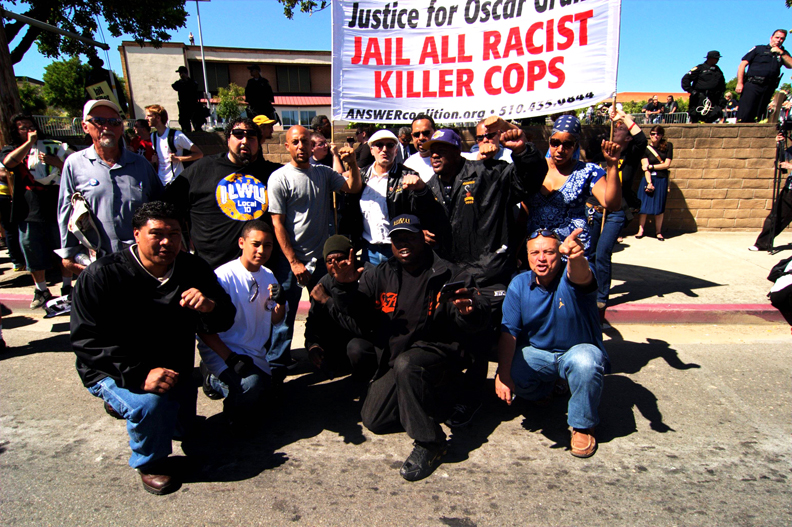 Labor unions and community activists in the Bay Area and beyond have a responsibility to condemn the received view of police violence and to demand a modicum of justice for Oscar Grant. They can do so by responding to the call by the International Longshore & Warehouse Union (ILWU) Local 10 to unite on Saturday, Oct. 23, at Oakland City Hall in support of “jail for killer cops.”

In a democratic society, the privileged power to harm granted police implies they bear a greater responsibility to protect, not greater leniency when “lapse(s) of professionalism” (San Francisco Chronicle 7/9/10) are equated with the killing of innocent youth. However, the received view of police violence offers a striking contrast to this fundamental democratic attitude by insisting, like Johannes Mehserle’s father, that “it is a very, very slippery slope when we start to send people to work with guns and not only civilly convict them, but criminally.”

Despite Mehserle’s fallacious statement – jail for one killer cop does not entail jail for all killer cops – it expresses well the “might makes right” attitude toward police violence implicit in the received view. It’s an ancient stance, perhaps first articulated by Thrasymachus in Plato’s “Republic,” who defined justice as the interest of the stronger. Socrates was quick and correct to denounce this authoritarian stance. Clearly it persists.

It persists when we are reminded by anthropologist Arthur Hippler that, in 1966, San Francisco police believed they “handled the situation in an orderly and dignified fashion, at no time misread the situation, and overall displayed professional competence” after gunning down 16-year-old Hunters Point teenager Matthew Johnson and responded to the ensuing community rebellion by unloading “every caliber bullet available to them” on the Bayview Opera House with a reported 200 children still inside.

It persists today when we hear apologists for Johannes Mehserle decry “the system” that attempts to jail killer cops, those “innocent victims” whose laudable service Oscar Grant’s family should no doubt salute for “the job they do,” if not for the job they did on Oscar Grant.

If we are at all concerned with social justice and basic principles of democracy, we might rather accept, with Noam Chomsky, that if “labor unions are the leading force for democratization and progress” and we desire a society where responsibility is proportional to power, we have an obligation as union members, committed activists and concerned citizens to join the ILWU in challenging the received view, to boldly assert that might does NOT make right and to demand that the state adhere to a modest legal maxim: criminal punishment for criminal offenses.

Nick Theodosis is a graduate student in philosophy at San Francisco State University. He is also on the ILWU-initiated Oscar Grant Rally Organizing Committee and a member of the Industrial Workers of the World. He can be reached at nmtheo@mail.sfsu.edu.