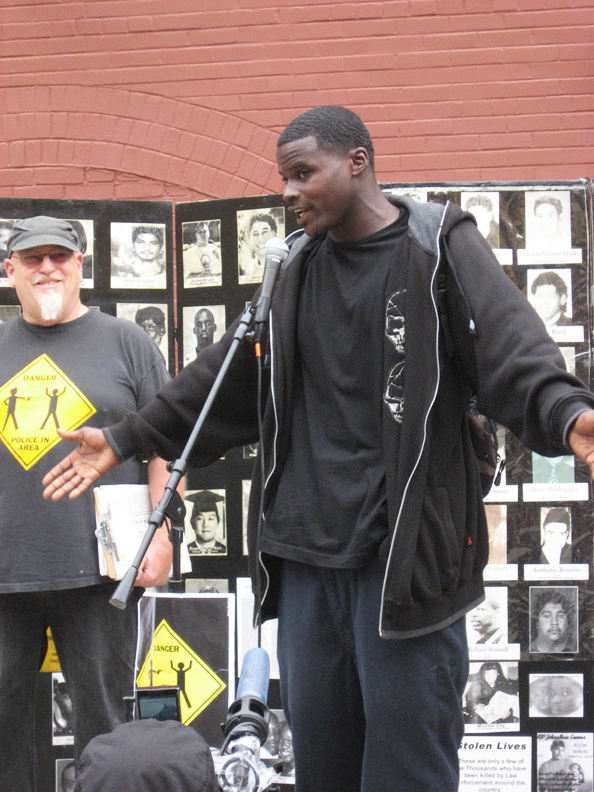 I rode my bike over to the Fruitvale BART station Friday, Oct. 22, for the rally marking the 15th National Day of Protest to Stop Police Brutality, Repression and the Criminalization of a Generation, featuring speakers who have been affected by police brutality. One son, Norman Curry, spoke of how his mother was shot point blank by an officer who called her by name, “Anita (Gay).” She was 52; her son was 23 at the time.

On Feb. 16, 2008, Norman’s mother was drunk, the neighbors were complaining and the policeman was returning to the house after neighbors called for assistance again. This wasn’t an unusual occurrence and Ms. Gay was cooperating when she was shot, her daughter who shared an apartment with her, and witnesses said.

“The bullets passed through her into her apartment, grazing her daughter’s face and narrowly missing her grandchild. The police claim the shooting was justified. The media demonized the family and blame the shooting on Anita.”

Many neighbors saw what really happened, yet, Norman says, all have been silenced through police intimidation now that Gay’s family is suing the Berkeley police for wrongful death. Roughing up witnesses or shaking them emotionally so that they eat accusations is nothing new; however, this is 2010, and one would think the judicial system would protect the vulnerable. But a policeman is involved and no one else in this instance and others in Alameda County and elsewhere seems to have any rights. 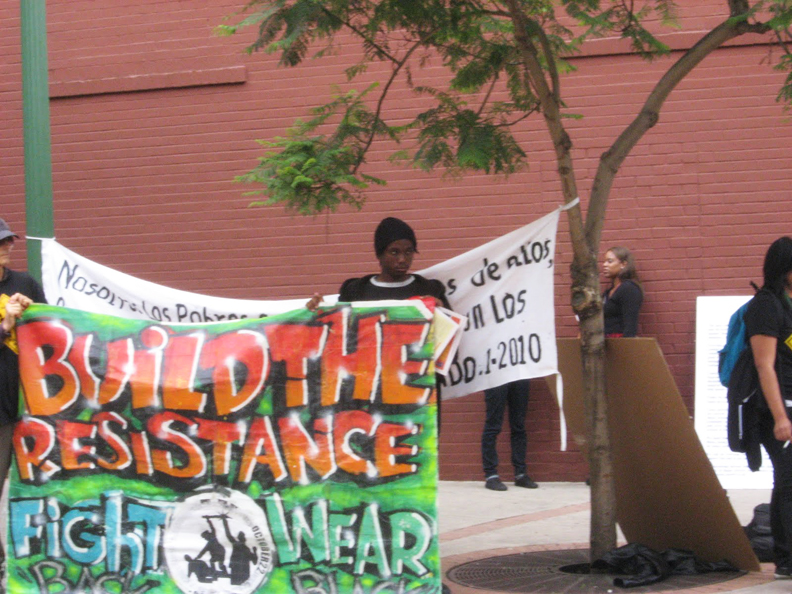 Residents in Fruitvale have started a People’s Patrol to witness police stops and activities especially where there is a physical altercation. The members have a “Proclamation,” which members shared at the Fruitvale rally.

The goal of the patrols is to “listen to and learn from the observation and criticisms of the people – even if they sting or if (the patrollers) do not agree.” Criticism is healthy in any movement “when they are right and even when they are wrong.”

“The patrols are comprised of both Blacks and Latinos and all nationalities, men and women, young and old, gay and straight,” to set an example, organizers say, of a society and neighborhood and Oakland community they would like to see. The patrollers are clean and sober, do not carry weapons and do not profit from these activities. “Contributions are submitted to support revolutionary movements.”

They wore these really cool shirts with a crosswalk on the front and “revolution” down the back side. They ask everyone “who believes in justice and emancipation to support the movement and get involved.” Contact Revolution Books, 2425 Channing Way, near Telegraph Avenue, Berkeley, (510) 848-1196, revolutionbooks@sbcglobal.net or www.revolutionbooks.org.

Another family – mother, father and sister – spoke of the loss of their loved one, Andrew Moppin. “Dec. 31, 2008, at 7:33 p.m., officers of the Oakland Police Department fatally shot Andrew Moppin in the back,” writes Morning Star Gali in a summary of Moppin’s case. “Andrew Moppin (Comanche/Klamath), a young unarmed 20-year-old man, had a $411 warrant out for his arrest for evading BART fare. 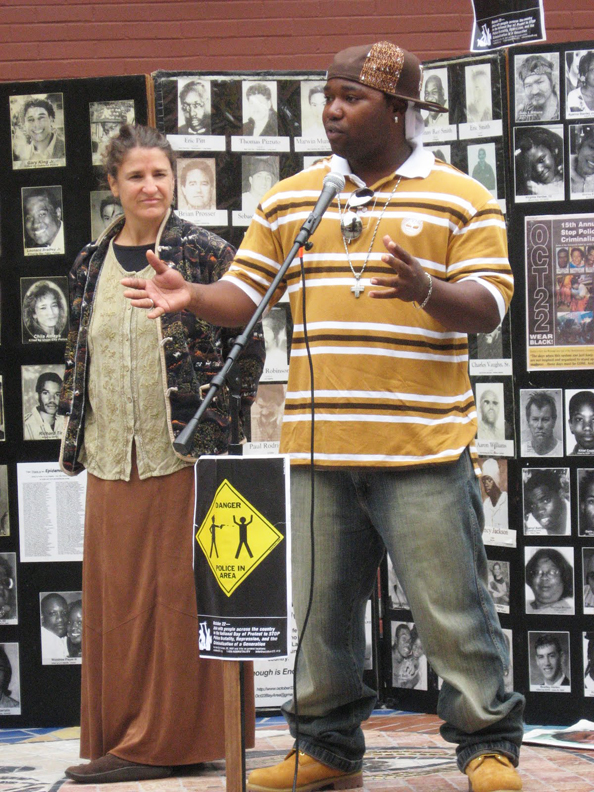 “Six months after Officer Hector Jimenez shot and killed Andrew Moppin, Jody ‘Mack’ Woodfox III, 27, was also fatally shot in the back by the same officer of the Oakland Police Department. He was also found to be unarmed.

“The fatal shootings of Andrew Moppin, Jody ‘Mack’ Woodfox III and Oscar Grant III are not isolated incidents. They are a reality in our communities of continuing police brutality.”

Rousing appeals were made by Richard Brown of theSan Francisco 8 (SF8)who were accused in 2007 of the 1971 killing of a San Francisco policeman based on evidence extracted by torture, a former Black Panther Party member and a judge in San Francisco Community Courts; Mesha Irizarry, mother of Idriss Stelley, murdered in a hail of police bullets at the Metreon Theater in San Francisco; and Deirdre Wilson, member of California Coalition of Women Prisoners and All of Us or None.

I was really impressed by the comments of Dee Lewis, a leading organizer against Alameda County’s gang injunctions. He spoke about John Russo’s office’s aggressive move to criminalize young Black and Latino citizens. Oakland’s gang injunctions started in North Oakland, then added Fruitvale, and East Oakland is next. These laws are spreading throughout the Bay Area and elsewhere in California. Among other things, they prohibit persons identified as “gang members” from being in so-called hot areas of activity – areas that are invariably under the pressure of gentrification, where developers want current residents of color to move out so they can move wealthier residents in. 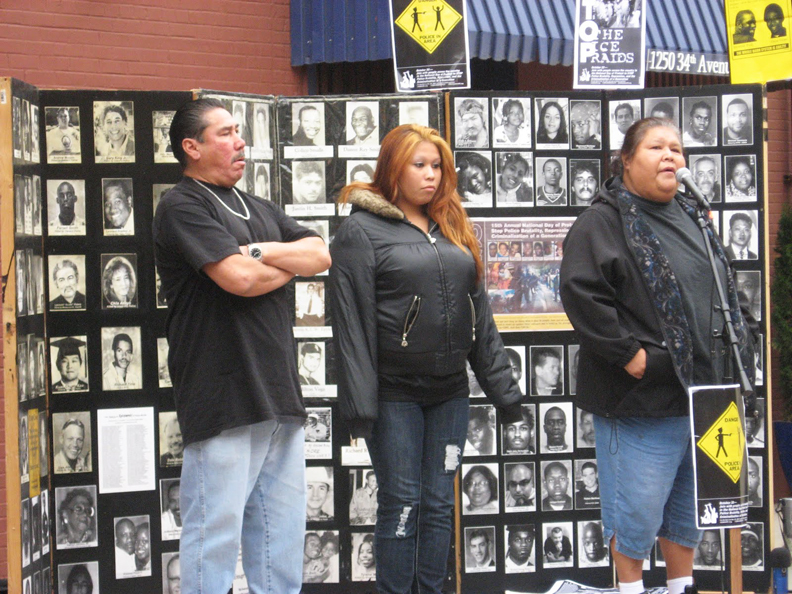 A person identified in a gang injunction, if picked up by police, can be sentenced to up to 25 to life. And that young Black or Brown person is not entitled to representation by a public defender. Most face the judge alone. The part I hadn’t known was that the “gang identified person” might not know he is carrying a scarlet letter in his pocket or that there is a blood stain on his front door.

Dee called for everyone to get involved. Contact him at deandre323@yahoo.com.

This is a PNN TV production reposted from POOR Magazine.