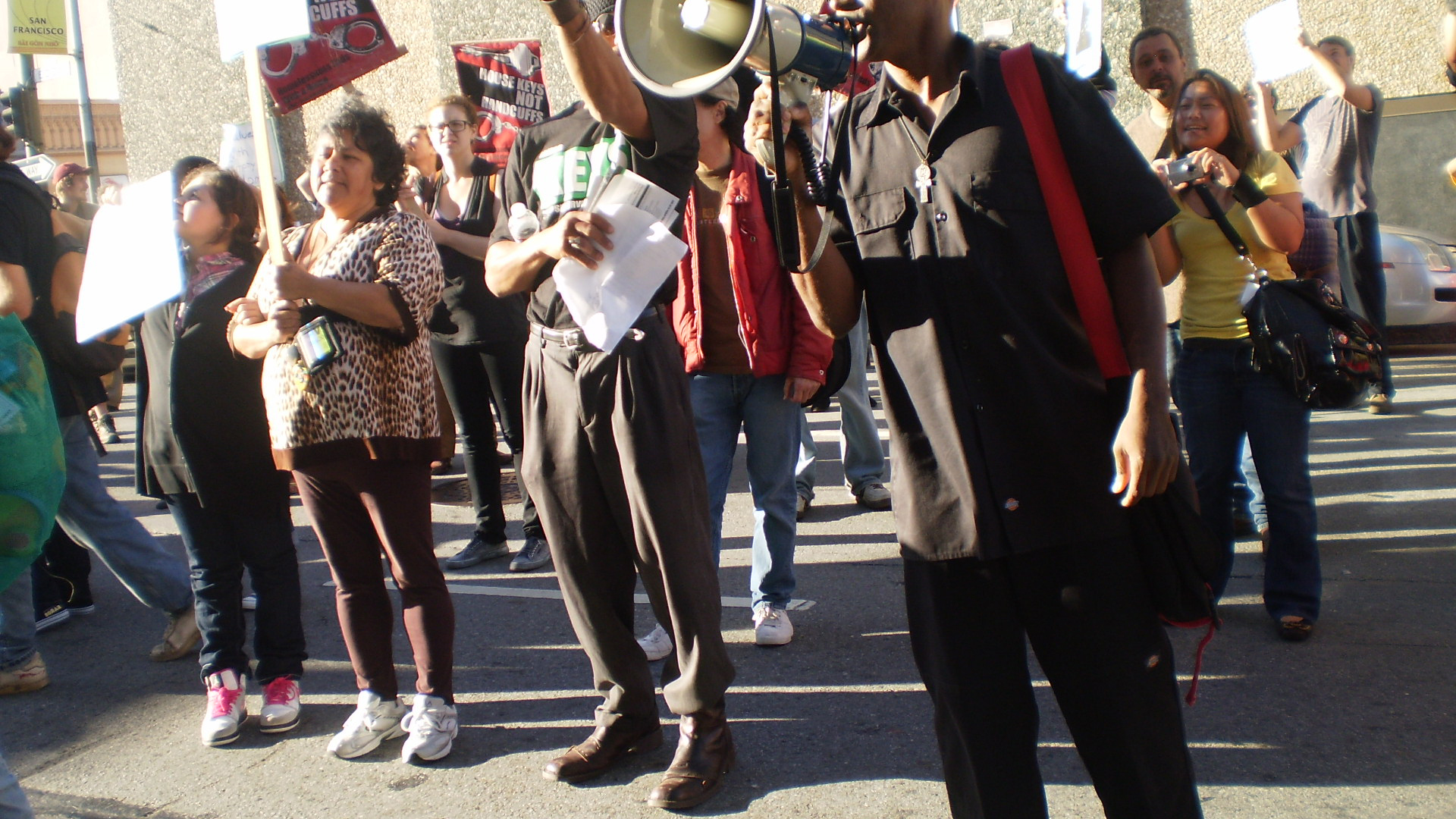 On Sunday, Oct. 10, from 4 to 7 p.m., in coordination with World Homeless Day, a spontaneously organized group, Creative Housing Liberation, came together to help kick off a rally with speakers and music at San Francisco’s Civic Center in the shadow of City Hall, the Mayor’s Office and the Board of Supervisors’ chambers.

Tommi Avicolli Mecca, activist and entertainer extraordinaire, led the group in singing his song, “Yuppie, Yuppie stole my pad,” which he wrote “for all the folks who were being displaced during the dot-com boom.”

The group of around 200 then marched north on Larkin a short distance to Eddy Street’s Leslie Hotel. Homeless people had taken over this lovely 68-unit building, which has stood vacant for two years. 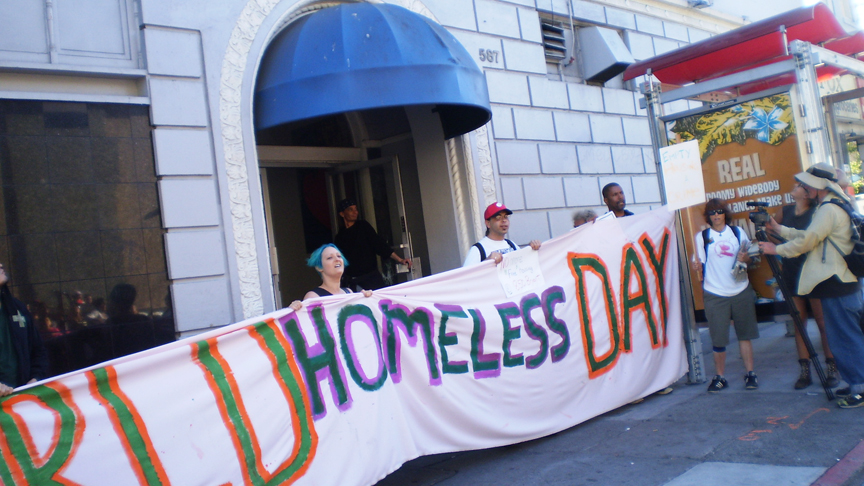 The demonstration continued in front of the building with music, poetry and chanting. People were spontaneously invited to stay and take housing tours of the premises. Orlando Ryel, one of the supporters and marchers, ushered me on a tour of the beautifully appointed manager’s office. “This is better than my SRO,” he said. “I don’t even have a closet like this.” Tiles in primary colors decorated the bathroom and kitchen, and intact fixtures looked down from the ceilings onto clean beige carpets below.

I was present inside when leaders of the “hotel liberation” hung banners from the upstairs windows.

Within an hour of the marchers’ arrival, the SFPD showed up to “intervene between the crowd and the occupiers,” as one participant put it. “This pretty much cancelled the housing tour,” he said, “and people decided whether to stay or leave.”

Demonstrators remained talking and singing outside. Several officers entered and exited. A thin Blue Line of police vehicles and officers cordoned off the street to traffic, apparently awaiting “reinforcements.”

On the 11 p.m. Channel 7 ABC news, Aaron Buchbinder, an observer keeping watch outside, spoke to the press. “We had the building open to the public,” he said. “Anybody who needed a place to sleep tonight could get in.”

2009 Census Bureau statistics say the Leslie Hotel is just one building with 68 out of an estimated 36,000 vacant San Francisco housing units. With 6,000 homeless people on San Francisco streets, that seems unfair.

Aaron continued, “It’s a disgrace to see three (sic) times as many empty units of housing in the city as there are people sleeping on the streets. Something really needs to be done. So, since today is World Homeless Day, we’re acting in solidarity with 50 other countries across the world and dozens of cities in the U.S., organizing with the community to create our own solutions to end homelessness.”

The SFPD allowed the squatters to remain inside until the owner could be reached. Roughly 15 to 20 squatters had a “good night’s sleep.” Then, rather than be arrested, they “silently disappeared.” 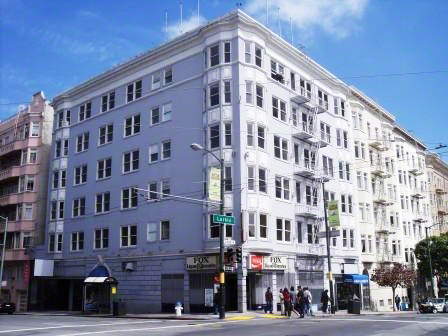 As of 1 p.m. Monday, Oct. 11, the manager remained incommunicado. False rumors swirled that police would start evicting the squatters, possibly using tear gas. Instead, SFPD sent in a SWAT team and found no one on the premises.

Earlier this year, Homes Not Jails, a group different from the organizers of the Leslie Hotel action, conducted a successful Easter squat.

In his Monday, April 12, column, Phil Bronstein, San Francisco Chronicle editor-at-large quoted this city’s paper of record: “Last week in San Francisco’s Mission District, a group of homeless and tenants’ advocates occupied an empty duplex ‘to promote the use of San Francisco’s vacant buildings as shelters for the needy.’” Mr. Bronstein reported the owner filed a complaint and four squatters were cited for misdemeanor trespassing and released.

Bronstein’s classist condescension rudely nose-dived toward obscenity. “Do you give a squat if homeless people live in your house while you’re away? I’m not keen on the idea myself and am thinking of having a friend come and hang out at my place should I decide to hike the Appalachian Trail.”

Aaron Buchbinder believes the SFPD should undergo an audit of police department expenses for “quality of life enforcement, (looking at) how much it clogs up the court system.” He wants us to examine how much in taxpayer dollars go into “unnecessary police repression for buildings that are vacant with nobody in them, let alone how much tax dollars and manpower they spend prosecuting people for sleeping on the streets. 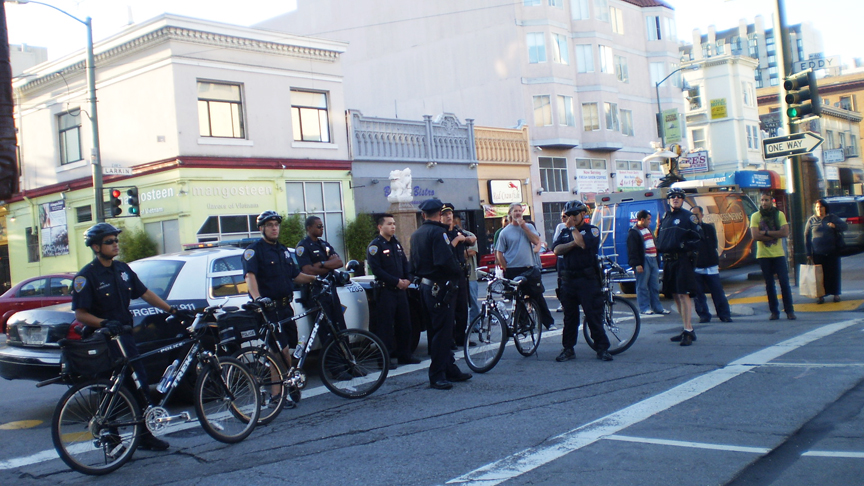 “Every time they hand a homeless person a ticket, who clearly can’t afford it, for an offense that is basically a human right, it ends up costing the city millions and millions of dollars a year, and the root of the problem is never addressed,” said Aaron. The “quality of life” offense of sitting on the sidewalk, he observed, “is already a crime under (existing) laws, and now they are trying to pass a new law.” He emphasized they could use that money for housing to help mitigate homelessness.

To give homeless people protection from dangerous shelters, dark streets and winter cold, in the future various groups could conduct more flashmob-type takeovers.

“People squat out of necessity all the time,” said Aaron. Additionally building takeovers are increasingly being used as an overtly political act. For instance, the Easter Sunday public duplex squat was organized to support renter Jose Morales who for years has worked with the Tenants Union to protest his illegal eviction from that building.

About a month ago, the Sierra Hotel on Mission and 20th Street in San Francisco was “liberated.”

In December 2009, San Francisco State students occupied their campus, and a student occupation on Berkeley’s campus occurred two days ago. The commonality between these events, said Aaron, is “the occupation of public space for economic justice.

“Students represent the high end of the working class,” he said. “Homeless folks come from the bottom end. With students, teachers, nurses, unions and landless peoples’ movements working globally in solidarity, even as our reality appears to grow more and more dismal, the prospects for the future are looking brighter.”