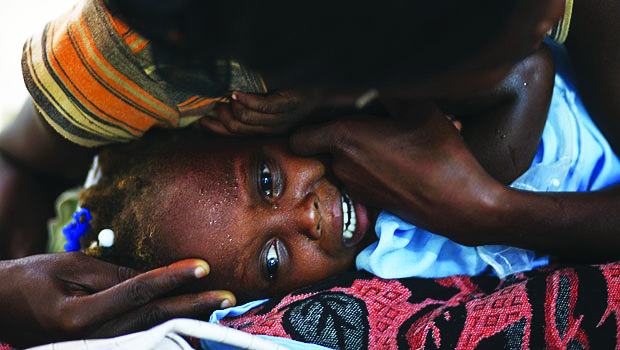 The cases “do not represent spread of the epidemic” because they were infected in central Haiti, according to a bulletin circulated by Haiti’s U.N. peacekeeping mission with the heading “Key Messaging,” obtained by IPS.

“The fact that these cases were picked up and responded to so fast demonstrates that the reporting systems for epidemic management we have put in place are functioning,” it concludes.

Residents of the capital city are not so confident.

“It’s killing people. Of course I’m scared. We’re in the mouth of death,” 25-year-old Boudou Lunis, one of 1.3 million people made homeless by the January earthquake and still living in temporary settlements, told the Miami Herald.

Radio Boukman lies at the heart of Cite Soleil, an impoverished slum crisscrossed by foul trash-filled canals where cholera could be devastating.

At a small, desolate camp of ripped tents nearby, a gleaming water tank is propped up on bricks.

Camp-dwellers said it was installed by the International Organization for Migration last week, more than nine months after the January earthquake damaged their homes.

But it’s empty because no organization has filled it with water.

Cholera, transmissible by contaminated water and food, could be reaching far beyond the capital city.

There are suspected cases of the disease in Haiti’s North and South departments, according to the Pan-American Health Organization. Altogether, at least 2,600 people have contracted the illness.

In Lafiteau, a 30-minute drive from Port-au-Prince, Dr. Pierre Duval said he had stabilised two cholera-infected men in the town’s single hospital but could not handle more than six more patients. One died Saturday.

All of them came from St. Marc, near the epicenter of the epidemic. The main hospital in St. Marc is crowded with the infected.

“We first talked to some lady from the U.N. who told us, ‘Oh, I have to go to a meeting. I’ll mention your names, but just come back tomorrow,’” he said. “These microcosms of operational logistics are just beyond them.”

Roberts said a Doctors Without Borders team quickly put his skills to use, adding, “[The U.N.] is so top-heavy with bureaucracy that they can’t effectively react to these small outbreaks which quickly snowball and spread across an area.”

On the dusty highway connecting Haiti’s stricken central region to Port au Prince, buses and tap-taps filled with people sped in both directions. There were no signs of checkpoints or travel restrictions near the city.

At a Friday meeting convened by the Haitian government’s Ministry of Water and Sanitation, “There were conversations around shutting down schools and transportation routes,” said Nick Preneta, deputy director of SOIL, a group that installs composting toilets in displacement camps.

“But if that’s the conversation now, however many hours after the first confirmed case, it’s already too late,” he continued.

“One of the recommendations was to concentrate public health education at traffic centers … There were a lot of no-brainers at the meeting,” Preneta said.

Cholera bacteria can cause fatal diarrhea and vomiting after incubating for up to five days, allowing people who appear healthy to travel and infect others.

The medical organization Partners in Health calls it “a disease of poverty,” caused by lack of access to clean water.

The Artibonite River, running through an area of central Haiti known as “the breadbasket” for its rice farmers, is considered the likely source of the epidemic after recent heavy rains and flooding.

Analysts say the regional agrarian economy has been devastated by years of cheap U.S. imports of rice to Haiti.

Ansel Herz is a 22-year-old freelance journalist based in Port au Prince, Haiti, since September 2009. He can be reached at ansel@riseup.net. This story first appeared in Inter Press Service News.

‘All elements of society are participating’: impressions of Cap Haitien’s movement against the U.N.