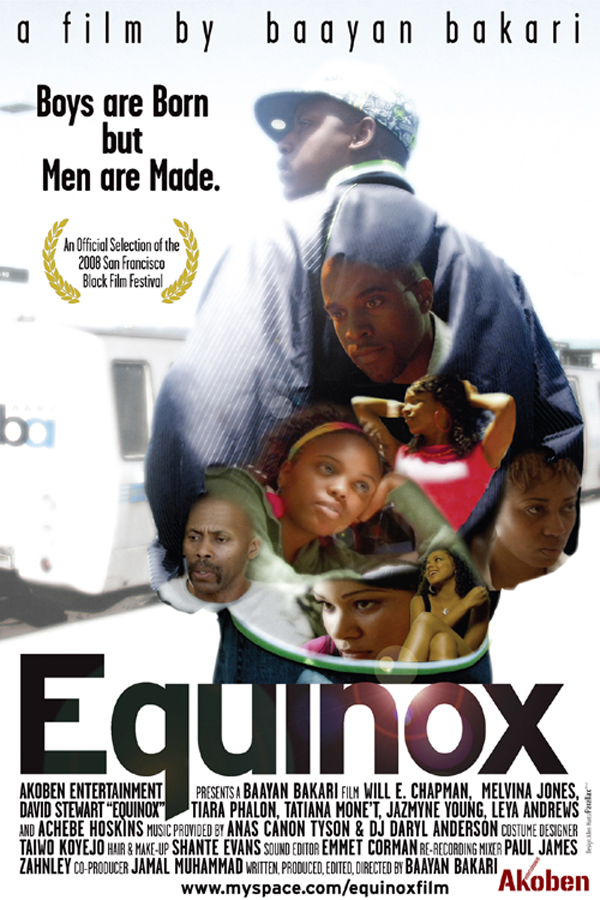 “Equinox” is a ground-breaking film on Black male and female relationships by local director and filmmaker Baayan Bakari. This subject is crucial in the Bay Area, where homosexuality is on the rise, among Black youth especially, while marriages between Black men and Black women are on the decline. Where is the Black family headed? Where is the self-love? I wanted to talk to two-times-married Baayan Bakari, who is also a well known mentor in the community, about this issue. Check him out …

M.O.I. JR: How long have you been a filmmaker and how did you discover that talent?

Baayan: I have been a filmmaker for 10 years. I discovered my talent after being giving an opportunity to bring one of my earlier scripts to the screen by an investor.

M.O.I. JR: When was “Equinox” released and what is it about?

Baayan: “Equinox” was initially released in July 2008. In a community where real men are increasingly hard to find, 18-year-old Malachi joins a “rites of passage” program to learn the true definition of manhood. What he learns is put to the test when his girlfriend resists his growth, his mother abuses his father, his sister’s provocative lifestyle endangers her safety and he’s asked to join a revolution against the local radio station.

You can watch the trailer and learn more about the cast and the film at http://www.equinoxmovie.com.

M.O.I. JR: What has the response been to “Equinox” around the country?

Baayan: Total support. “Equinox” has screened in Tuskegee, Alabama, and Brooklyn, New York, and the audiences have completely been supportive and definitely want more of this kind of entertainment.

Baayan: The Bay Area is full of truly dedicated and talented artists. I wasn’t trying to commercialize this film actually. I was trying to give our community a cultural artifact that can be handed down and used as a catalyst for change AS WELL AS being highly entertaining.

M.O.I. JR: What do you think are two of the most fundamental causes for relationship failure in the Black community?

Baayan: 1) Lack of forgiveness and 2) Not understanding that relationships are about growth, not just happiness.