Cholera has killed over 500 people in the valley along Haiti’s Artibonite River, a rural region north of Haiti’s capital; another 7,359 people have been sickened. And now the threat of this deadly epidemic has been intensified by flooding from Hurricane Tomas that hit Haiti over the weekend.

“We do expect the infection rate to jump up due to the flooding and to the bad sanitation conditions in many areas,” Christian Lindmeier, spokesman in Haiti for the Pan American Health Organization/World Health Organization, told Reuters.

The acute diarrheal disease is a bacterial infection of the intestine which spreads when food or water become contaminated with human waste containing the cholera organism. Cholera causes profuse, watery, high volume diarrhea that is rapidly dehydrating. The infection can be fatal to young children, the elderly and the undernourished. Without immediate medical treatment, people can die of dehydration.

U.N. officials are investigating sewage draining into a tributary of the Artibonite River from a Nepalese base of U.N. (MINUSTAH) troops as a possible source of the deadly outbreak. Al Jazeera reports that the unit moved into the area in mid-October.

Cholera is a disease of poverty caused by lack of access to safe, clean water. The Lower Artibonite, once Haiti’s rice farming region, was hit hard economically by competition from cheap U.S. rice after lowered rice import tariffs were imposed on Haiti beginning in the mid-1980s.

Haiti has not had a documented case of cholera since the 1960s, but conditions in the Lower Artibonite placed the region at high risk for an outbreak of cholera even before the earthquake, according to Dr. Joia Mukherjee, chief medical officer for Partners in Health.

In 2008, Partners in Health, working with the Robert Kennedy Center for Human Rights, documented that in 2000 the Bush administration blocked vital life-saving loans for water, sanitation and health from the Inter-American Development Bank to the progressive government of President Jean-Bertrand Aristide. This deliberate political maneuver to undermine Haiti’s democratic government had a direct impact on the city of St. Marc (population 220,000) and region of the Lower Artibonite (population 600,000), which had been among the areas slated for upgrading of the public water supply, depriving the people of their right to safe water. 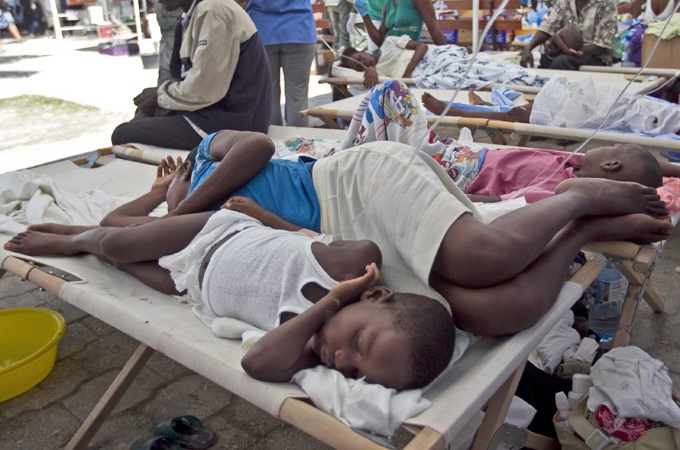 Meanwhile, health authorities warn that while the outbreak remains concentrated in the Lower Artibonite region, it is inevitable that there will be some cases of cholera in Port au Prince. Five cases have already been reported in the city among people who had traveled there from the affected rural areas.

Four latrines in Accra Camp, where 17,000 people reside, are so filthy no one will use them. Children play in dirt muddied from rain. Clean water is only available to those who can purchase it; many camp residents have complained that Red Cross water makes them sick.

At least 1.3 million Haitians living in the vast “tent” cities of Port au Prince are in the path of a rapidly progressive illness whose potential was identified in the immediate aftermath of the earthquake. Yet 10 months later, with millions of dollars in donated aid relief, the proper infrastructure to provide safe living conditions in the refugee camps is utterly lacking. The rights of Haitian people to internationally mandated standards for displaced persons have been profoundly violated.

In the short term, health workers and community activists are mobilizing to carry out intensive education and prevention campaigns to control the spread of cholera and get clean water to the camps.

The fundamental issue, however, remains the political crisis which denies Haiti democracy and human rights and underlies the persistent impoverishment of Haiti’s people. As long as the predatory agenda of the United States, foreign and elite interests prevails in Haiti, the rights of the vast majority of Haitians are threatened.

It is time to listen to the voices of Haiti’s popular movement calling for an end to the U.N. military occupation, now entering its seventh year. It is time to demand free and fair elections that include Haiti’s largest political party, Fanmi Lavalas, and time to heed the widespread call for the return of Jean-Bertrand Aristide.

For the latest news, see Haiti Action Committee on Facebook and at www.haitisolidarity.net and www.haitiaction.net. If you can help financially, donate tax-deductibly to the organization that the Haitian people trust to deliver your entire gift to the people most in need, the Haiti Emergency Relief Fund.