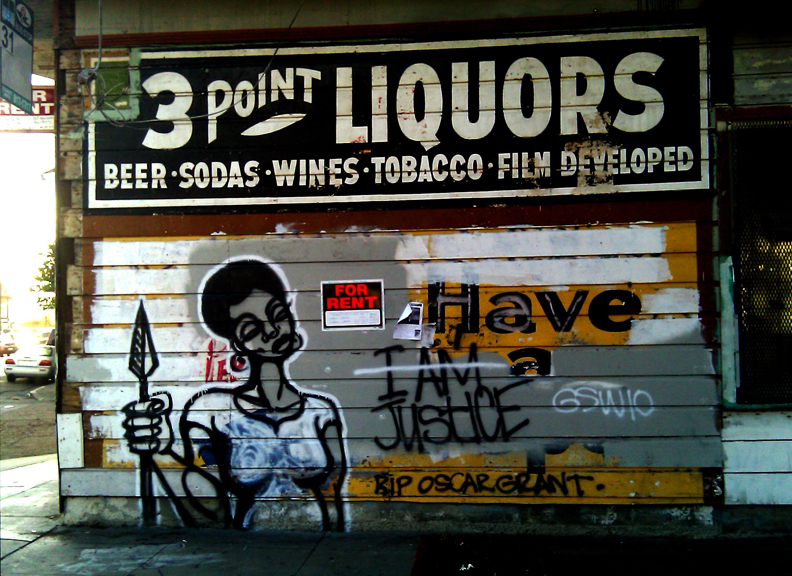 Eesuu is one of my favorite male visual artists in the Bay, and in my opinion he is one of the dopest in the country right next to Malik Seneferu and Jocelyn Goode. I have been a fan of his art for years. I love the themes that he creates from, as well as the vibrant colors that he uses in some of his pieces.

He is also not one of those artists who just sits in his studio. You can find Eesuu on the grind, selling art work, t-shirts, sculptures and the likes at community events around the Bay. He is a star in Oakland’s art world who will sooner or later take his place in the artistic constellation of the dopest visual artists from around the world. Check out this talented artist in his own words …

M.O.I. JR: How would you describe what type of visual artist you are?

Eesuu Orundide: I would describe what I do as functional. I deal with imagery meant to convey specific ideas. Over the years, I’ve worked in a lot of different styles and mediums, but the constant is my content. 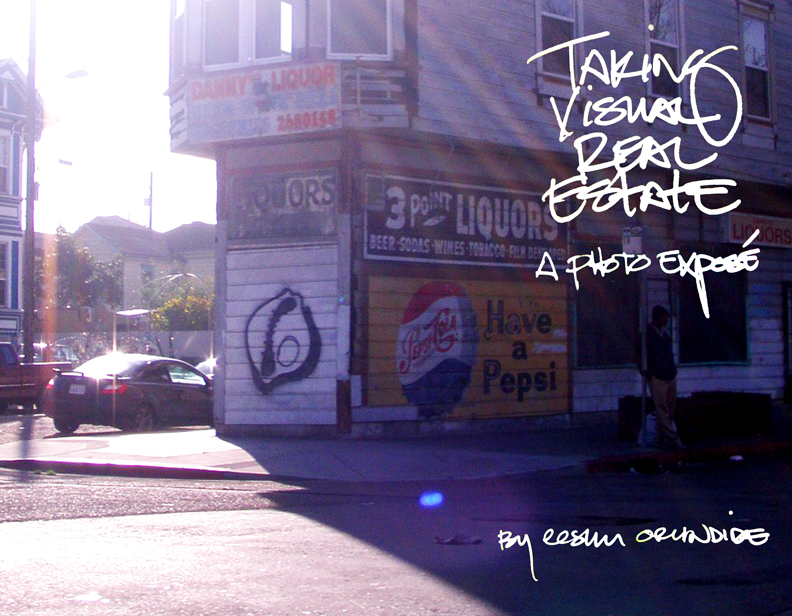 My art is meant to fight oppression, sometimes with a fist and sometimes with healing. I want the imagery to be attractive and the aesthetic to reflect where I come from.

M.O.I. JR: How long have you been doing art? When did it start?

Eesuu: As cliche as it sounds, I been doing art all my life. When I was 18 months old, my mama had me do an oil painting on canvas and the piece hung in our apartment. Ever since then, I have been drawing, painting, sculpting, making beats, apparel … anything creative.

I got serious about painting around 1993. I sold my first painting to a stock broker in the office I was working in, and that started me thinking that I could make a living from it. In ‘98 I went to Zimbabwe and learned stone carving and that just seemed to round out my game.

M.O.I. JR: Can you tell us a little about your new book that you just released?

Eesuu: The book is called “Taking Visual Real Estate” and it’s a photo expose on four or five series of street art. I felt like these images were different from most graffiti, because instead of the artist’s name and style being the main message, these had social commentary relevant to what’s happening in our community, right now. 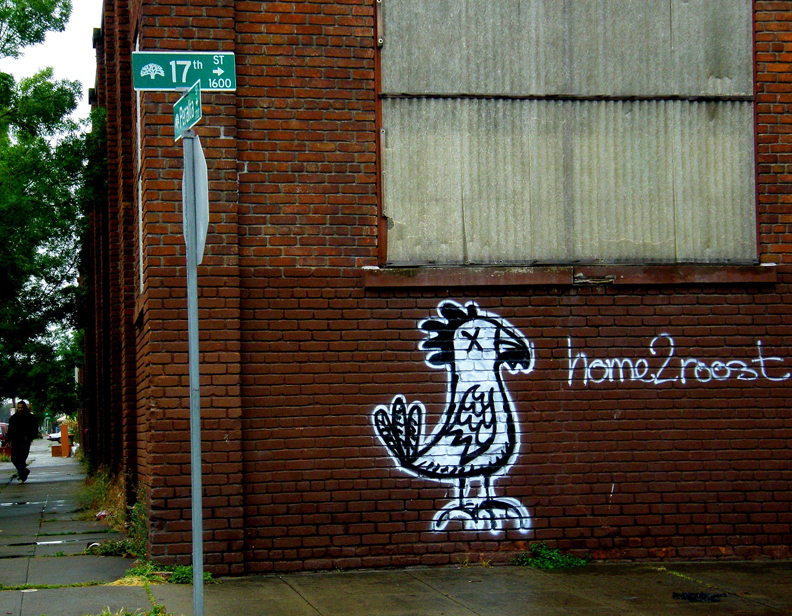 You can’t go anywhere in Oakland without seeing cowrie shells painted somewhere in public view. First thing that comes to my mind is Africa, then a concept of wealth different from the material consumption we usually think of, and finally the feminine energy.

I covered some of the work of Golden State Warrior, who paints urban warriors carrying spears and demanding justice for Oscar Grant. They’ve become the signature imagery for that movement.

I documented the Chickens Home 2 Roost after Lovelle Mixon turned the violence around on the police, who usually do the brutalizing in the Black and Brown communities. Molotov cocktails flying across the cityscape, suggesting the people’s ability to fight back.

I documented the Chickens Home 2 Roost after Lovelle Mixon turned the violence around on the police, who usually do the brutalizing in the Black and Brown communities. Molotov cocktails flying across the cityscape, suggesting the people’s ability to fight back.

Then, to top it off, Duane Deterville, a well known artist, writer, activist and art critic, wrote a powerful introduction that puts it all right in context. 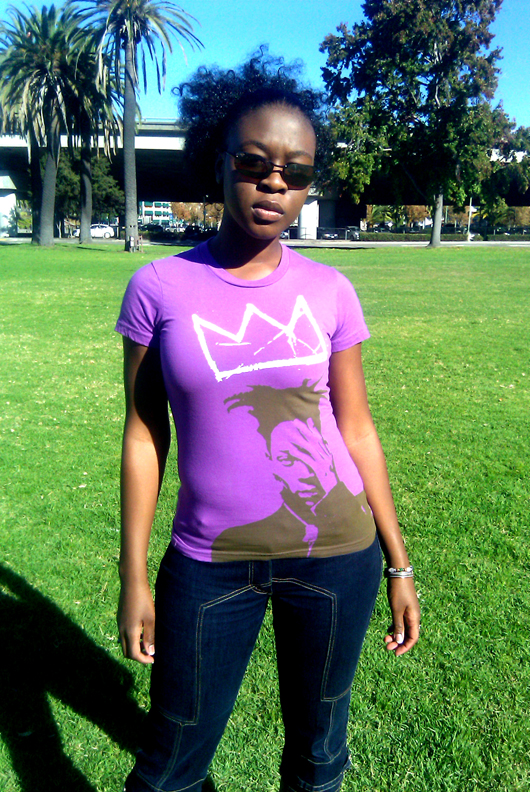 I’m proud of this little book for the way it marks our time. Folks can buy it on lulu.com by typing in the title – or clicking here.

M.O.I. JR: Can you tell us a little bit about your new Basqiuat t-shirts? What in him inspired you to make them?

Eesuu: I’ve been designing t-shirts for a few years now. I call the line Orundide Afro-Urban Couture, and that’s a perfect description of the vibe I’m going for. The Basquiat tee is the latest.

It’s inspired by the painter Jean-Michel Basquait, who shot to the top of the art world in the ‘80s. His work has been a big inspiration to me and artists all over the world. His style is unmistakable, fearless, simple and complex at the same time.

But his content is what gets me. His paintings have everything to do with the experience of being Black in Amerikkka in my opinion: They talk about stereotypes, slavery, criminalization, police brutality … shit like that. A lot of people overlook the content for the style, which they copy.

He was a massive success in the white art world, but I’m reclaiming his legacy as part of our heritage. He reminds me a lot of Jimi Hendrix in that regard. 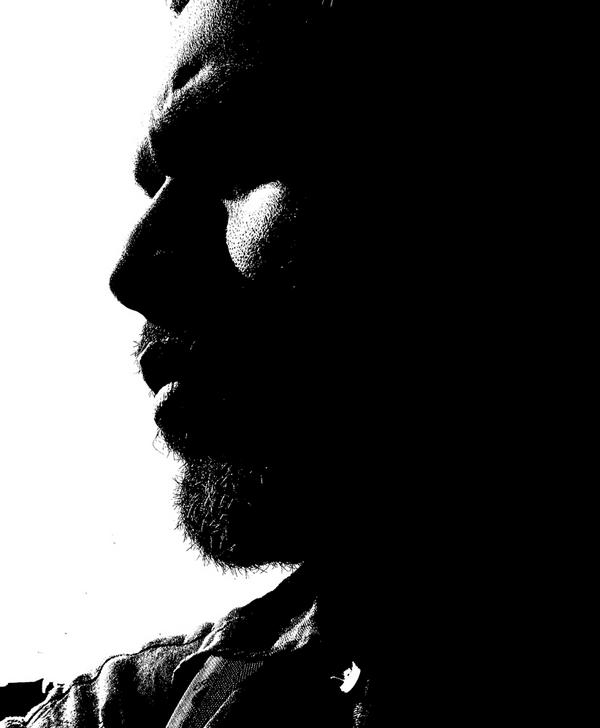 The shirt itself is organic cotton made by American Apparel, and it’s printed by a process that’s soft and natural. The whole thing is so comfortable people are gonna wanna wear it every day.

M.O.I. JR: How could people keep up with you as an artist?

Eesuu: The best way for people to keep up with what I’m doing is my Facebook page. Search Eesuu Orundide, and I’m the only one.

Thanks, JR, for shedding light on what I’m doing.