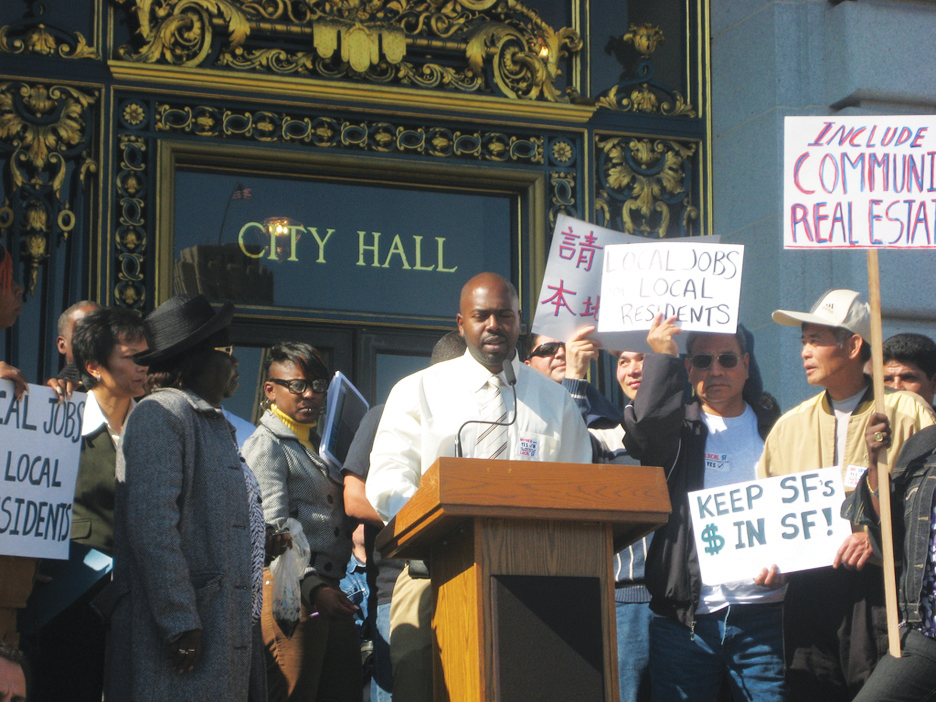 As a life-long San Franciscan and Bayview Hunters Point resident for the last 27 years, I first got involved with the issue of Local Hire about two years ago with James Richards Sr. and the group ABU. At any given time over the last few years you can find a dozen major construction projects going on in the southeast sector, but the workforce never reflected the diversity of our neighborhood.

Almost every day we were protesting at a different construction site for our fair share of the jobs coming into our community. I would hear James say that 50 percent of the jobs were supposed to be our jobs. He explained that the City of San Francisco and the San Francisco Redevelopment Agency had a “law” in place that stated that 50 percent of the construction workforce was supposed to be hired from the project area where the work is being performed.

Some of the contractors tried to take a hard line, while others would concede and offer up a few jobs here and there. But while they seemed like victories, many of them were temporary, and our guys would only work days or weeks before they were laid off. Then we would be back down there protesting once again.

I had many a sleepless night worried that one day these protests would turn into an all out brawl or worse, due to frustration from lies and broken promises. We have young men out here killing each other every week over little or nothing. Unemployment for African American males in the southeast sector is well over 50 percent, but you have these contractors bringing billions of dollars worth of work into our community, much of the work we are more than qualified to do, and they tell us they don’t have to hire us?

You would think as dangerous as this neighborhood is they would want to have a few of us around to make sure everything goes smoothly, right? How does it look that they come in here and take well paying jobs that should be ours, to build housing that we can’t afford to live in without those jobs? What does that mean for us? San Francisco plans to tear down 100 percent of our affordable/low-income housing and rebuild, but only 33 percent of the new housing will be affordable to low-income people. Where does that leave the other 67 percent?

Unemployment for African American males in the southeast sector is well over 50 percent, but you have these contractors bringing billions of dollars worth of work into our community, much of the work we are more than qualified to do, and they tell us they don’t have to hire us?

In late 2008 I started going to meetings with a group called The Osiris Coalition, of which an old friend of mine, Ed Donaldson, was a founding member. I began to talk to other individuals in the meetings about the issue of Local Hire and this “law” on the books. I was particularly interested in how it could be enforced. After getting some direction on where I could find out more information, I discovered that this 50 percent “law” in fact was not a law, but a resolution with no real enforcement penalties to speak of.

As it turned out, contractors were only required to make a “good faith effort” to find qualified local residents to hire for the work being done. Another Osiris Coalition member, Greg Doxey, joined me on my journey and he and I discovered by talking to individuals employed within the Redevelopment Agency (SFRA) and the Mayor’s Office of Economic and Workforce Development (MOEWD) that there was nobody actually on the ground enforcing compliance for their local hiring “goals.”

Greg and I began doing extensive research and knocking on doors in City Hall to figure out how we change this 50 percent resolution into a mandate with real teeth to enforce it. We began looking at other Local Hire policies in cities such as Richmond, Calif., and Los Angeles. We also started contacting lawyers who were involved in helping research and draft the policies that led to their ordinances being passed. It was a painstaking process and we felt like we had hit a sticking point until a mutual friend introduced us to Joshua Arce of the Brightline Defense Project, who in turn introduced me to Vincent Pan and Chinese for Affirmative Action.

This was a match made in heaven. They were exactly in the place where we wanted to be with Local Hire. They had already thoroughly researched the issue and determined that not only was a 50 percent local hiring mandate feasible, but that it was LEGAL! At that time, Brightline and CAA were just finishing up the comprehensive report, “The Failure of Good Faith.” This report laid it all on the line and had made it into the hands of City Supervisors John Avalos and Ross Mirkarimi.

Supervisor Avalos was already working on introducing 50 percent Local Hire legislation to the Board of Supervisors and he wanted to do it very soon. Joshua and Vincent invited me to speak at their press conference down at CAA headquarters in Chinatown. The Osiris Coalition’s relationship with Local SF blossomed and continues to grow from there.

A 50 percent local hiring mandate on City-funded projects can have a major impact on the local economy and can save many lives in District 10. I have seen many individuals who were knee-deep into the street life turn their lives around. Many of them are now law abiding, tax paying citizens. Many of them have become homeowners because they were able to achieve journey-level tradesmen status through opportunities created through ABU and Young Community Developers (YCD).

But on the flip side, I have seen many tradesmen, apprentice and journeymen alike that have become discouraged and left the trades due to the lack of sustainable and consistent work offered to them in their respective trades. Many attribute this to racism, nepotism and favoritism for out-of-town union members. When you have out-of-town tradesmen getting 80 percent of the work going on right here in San Francisco – and in our neighborhoods – and we can’t get any work, there is something seriously wrong with that picture.

In the meanwhile, the head of the Building Trades continues to offer up excuse after excuse on why they don’t want to allow us more access into the trades and why 50 percent local hiring goals cannot be reached in three years. He wants to blame the schools for not offering shop classes anymore. Then he says that because of that, there is a risk that there will be a surplus of unskilled workers coming into the construction workforce.

That excuse doesn’t fly because the Building Trades makes it their responsibility to ensure that all of their members are properly trained. They have a stellar reputation to protect, and to risk that is to risk losing their collective bargaining power. They have plenty of money and resources for this training.

As a matter of fact, they lobbied very hard for and got included in the Community Benefits Agreement worked out between Bayview Hunters Point residents and Lennar Corp. a total of $17,000,000 earmarked for construction and other workforce development training. Their main selling point for securing that pot of money was that they needed it to train the influx of new apprentices that would “overwhelm” the trades because of the San Francisco Redevelopment Agency’s “unreasonably high” 50 percent local hiring goal for the Bayview Hunters Point Project Area. This 50 percent hiring goal, however, is also based on “good faith” and it is also a complete failure!

A few months back I read an article in the San Francisco Building & Construction Trades Council newsletter called “The Conundrum of Local Hire,” where Secretary-Treasurer Michael Theriault says “a foreman” may have “certain doubts … about whether a minority member from the inner-city can carry the same work load as someone from a farming or peasant background.” Yes, he really said that!

In another article called “The Building Trades and Violence in the African American Community,” Theriault gives a long, drawn out analogy about “operator error” and compares the violence in the African American community to a train wreck. He then says that jobs won’t end the violence because 95 percent of San Francisco homicide victims under the age of 25 in any given year are high school drop-outs, which means they wouldn’t qualify to be in the trades anyway!

San Francisco Building & Construction Trades Council Secretary-Treasurer Michael Theriault says “a foreman” may have “certain doubts … about whether a minority member from the inner-city can carry the same work load as someone from a farming or peasant background.”

He also gives other statistics and tries to misrepresent them to bolster his argument that giving our youth jobs wouldn’t make a bit of difference. He didn’t even stop to consider that if the parents of these youngsters had well-paying construction jobs, most of their kids wouldn’t be out in the streets in the first place!

He didn’t stop to think that if these youth knew that they had opportunities waiting for them right out of high school like maybe the Building Trades, or if they had parents who could assist in sending them to college, it might result in a dramatic reduction in the crime and violence in the African American community! Oh, did I forget to mention that this guy sits on the board of directors for our beloved Young Community Developers (YCD)?

This is the type of resistance and ignorance we are up against. To be truthful, the Building Trades’ motto, “A century of excellence in craftsmanship,” should be “A century of ingrained racism and preconceived notions!”

The time for excuses is over! Change is coming whether the good ol’ boys like it or not! This Local Hire legislation for publicly funded construction projects is only the beginning. Next we are going to put the pressure on state, federal and privately funded projects that are being planned in and around the southeast sector. We will then be looking towards creating legislation to open up the door to non-construction jobs as well.

This fight has only just begun and it’s going to take a while. We’ve been fighting for the last 50 years, only from this time forth, we are going to fight a lot smarter.

Macio Lyons is a member of The Osiris Coalition, an African American policy think tank, and director of the upstart SouthEast Community Development Corp. He can be reached at southeastcdcorp@gmail.com. And visit the SouthEast CDC on Facebook, at http://www.facebook.com/group.php?gid=134575429909950&ref=ts.