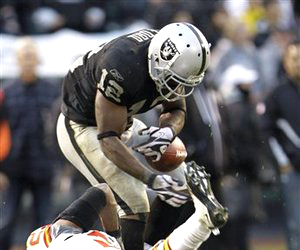 The minute the Oakland Raiders’ Jacoby Ford caught Jason Campbell’s 49-yard bomb in the overtime period against the Kansas City Chiefs and Sebastian Janikowski kicked a field goal to catapult the Raiders to the 23-20 win, “playoffs” is a word that could be quietly uttered in the Raiders locker room.

Words like playoffs haven’t been uttered in Oakland over the past eight years since 2002, the last time the Raiders made it to the playoffs and the Super Bowl. This year, the Raiders have a three-game win streak and a 5-4 winning record. The Raiders are 3-0 in the AFC West and a half game out of first place behind the Chiefs, who fell to 5-3.

The improved play could be attributed to the quarterbacking of Jason Campbell, who was 19 of 33 for 229 yards and one touchdown. While he has struggled a bit, he has won all five of the games he has quarterbacked for the Raiders. His play was erratic at times on Sunday early in the game, but in the second half his play was gutsy.

“Jason’s plays was frustrating, ugly and then really something,” said Coach Tom Cable.

“It wasn’t pretty but we won, and that is all that matters,” said Campbell. “A total team effort.”

His main target in the game was Jacoby Ford, the Clemson University rookie, who caught six passes for 148 yards. His passes set up the game-tying field goal in the final minutes of regulation play. He also helped the Raiders to a winning field position in the overtime and sparked the Raiders in the second half, after he ran back a 94-yard kickoff at the start of the second half to score a touchdown, waking up the Raiders and the sold-out Coliseum crowd.

The Raiders defense would hold the Chiefs in the second half to timely stops during critical possessions, and the Raiders offense was able to capitalize behind the play of Campbell and Ford.

“The coaches just put me in a position to make the plays and I did,” said Ford.

The Raiders are off for bye next week. They will then travel to play one of the toughest teams in the league, the Pittsburgh Steelers on Nov. 20. The results of this game will be a good indicator to see if the Raiders are ready for the playoffs this year and what the team is made off.

Bay Area journalist Lee Hubbard is well known to longtime Bay View readers. He can be reached at superlehubbard@yahoo.com.

49ers win Battle of the Bay