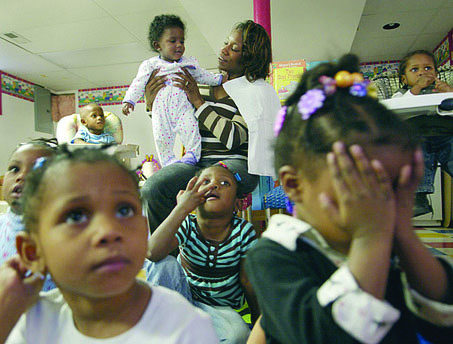 Gov. Arnold Schwarzenegger has decided to jump back into the role that made him famous and play the terminator, with the elimination of the Calworks Stage 3 child care program.

In the movie, Arnold runs all over town protecting a helpless child, ensuring the child security and comfort by shielding him from harm and making him feel safe and protected. In real life, Arnold is a cold-hearted villain who sucks the hopes and dreams out of hard working families and leaves helpless children to wonder what the future holds. Unlike his famous line in the film, “I’ll be back,” he has no intention of ever bringing back these child care services that play a leading role in the lives of low income and minority families in California.

Families statewide are being devastated by this tragedy, with parents of over 8,000 children in the Bay Area and 57,000 statewide being left to agonize about the future of their employment. Childcare is expensive and without a subsidy it is almost impossible for low income working families to afford. Depending on the number of children needing care and their circumstances, families can pay many hundreds a month for care.

In real life, Arnold is a cold-hearted villain who sucks the hopes and dreams out of hard working families and leaves helpless children to wonder what the future holds.

I have an autistic son, and although my child care subsidy was not affected, there are many parents who have special needs children who require one-on-one child care and special accommodations. I know firsthand how difficult finding the right child care placement for your child can be, especially if they have special needs.

Many people have been using the same providers for years, and many of the home-based providers are very close to the families they serve. Many child care providers who these cuts will also affect go out of their way to help these families, who need all the help they can get. Many center-based child care providers don’t have early drop off times and/or late pick up times for parents who work graveyard or swing shifts.

“The governor does not understand the challenges of working families,” says Kate Ertz-Berger, executive director of the Contra Costa County Child Care Council. “By cutting Stage 3 funding, the governor has taken away the continuity of care and early education that gets children ready for school, and this puts their parents’ jobs at risk. It will hurt our community.”

“I was a victim of this budget cut,” Renita Wilson stated angrily; she’s a hard working mother of two elementary school-aged girls. “I don’t know what I am going to do or how I am going to work now. I have not received Calworks benefits for over eight years and, now that I can’t pay for child care, I may be forced to quit my job and re-apply for aid.”

Renita’s story is one of thousands told by parents who are also facing the bottom-line question: “To work or not to work?”

The governor has made it clear that he cares nothing about the struggling working families of California. The parents affected by these cuts are men and women who have worked hard to get off of cash aid and support their children by obtaining full time employment. They will now be forced to go back on cash aid – or worse: a life of crime – in order to put food on the table, a roof over their children’s heads and clothes on their back.

What will these parents do when they are unable to take their children to their child care providers on Nov. 2, the day after the cuts take effect? How will they explain to their employers that they will no longer be able to work because they can’t afford child care? It is evident that the governor doesn’t give a damn about taking food out the mouths and shelter from over the heads of thousands of children in California who rely on these services day to day.

The California budget was passed on Oct. 8, 2010, more than 100 days past the expected date, but the Calworks Stage 3 child care program doesn’t officially end until Nov. 1, 2010. I was surprised to find out that child care payments have been at a stand-still since July 1, 2010, due to the late passing of the budget.

“I do not know what I am going to do if I am not paid soon,” stated Jackie Collins, a home-based day care provider who resides in Pittsburg, Calif. “I am at risk of losing my house because I have used all my resources and dried out my savings account just to pay my mortgage and buy food because I have not received payments from the Child Care Council for the three children I watch,” she said.

I have a new provider and she contacted me about receiving payment last week, so we both called the Child Care Council and were stunned to learn that no one has been paid for their services since the summer.

According to the Contra Costa Times: “Assembly Speaker John Perez, D-Los Angeles, announced a proposal this week that would go around the governor and restore funding until a new chief executive takes office in January. Schwarzenegger killed the [child care] program in one of several line-item vetoes after completing a budget deal with the Legislature earlier this month. Eliminating the child care subsidy is intended to save the state about $256 million a year.”

Gov. Schwarzenegger didn’t just kill the program; he killed the hope for thousands of working families who ever dreamed about overcoming poverty, by forcing them back into the same situation that they have worked so diligently to overcome.

Welcome to ‘The Tech Boom’: an interview with producer Traxamillion