by Rep. Barbara Lee, Chair of the Congressional Black Caucus 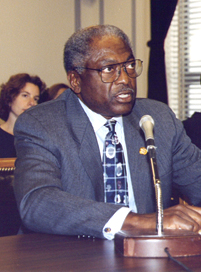 With our country by Rep. Barbara Lee, Chair of and the Democratic Party at a crossroads, it is important that we have a leadership team in place that recognizes and reflects the strength and diversity of both the Democratic Caucus and our great nation.

As chair of the Congressional Black Caucus, I have worked closely with Congressman James E. Clyburn of South Carolina to advance an agenda that has made a difference for millions of Americans. There is no question that Democrats in the House of Representatives and the American people need Congressman Clyburn to remain as the Democratic whip going forward.

As majority whip, Congressman Clyburn has been an extremely effective consensus-builder, rounding up the votes for what has been called the most productive Congress in decades. Thanks to his leadership and precise vote counting skills, we were able to pass the Recovery Act, health care reform, which included landmark student loan reform, Wall Street reform and many other pieces of legislation that are helping to turn our country around. As we transition into the minority, it is even more important that Congressman Clyburn continue in his role as whip.

Congressman Clyburn has spent a lifetime working to bridge what divides us. Throughout his career in South Carolina, he learned how to work with conservatives and moderates to get results. As caucus vice-chair, caucus chairman and majority whip, he brought together the diverse spectrum of our caucus behind a unified agenda. Congressman Clyburn has been a key voice in marginal districts where African-American constituencies are strong. He has consistently supported our members, he has campaigned in these districts, and he knows what it takes to recruit candidates and win elections

As currently the highest ranking African-American in the House of Representatives and the only African-American in Democratic Leadership, Congressman Clyburn is uniquely positioned to advocate for and advance the interests of members of the Congressional Black Caucus and our constituents. Furthermore, Congressman Clyburn also has developed a strong relationship with moderate and Blue Dog members of the caucus through his work as caucus vice-chair, caucus chairman and majority whip. He represents a rural district in a red state in a section of the country that many Blue Dogs hail from.

Our path back to the majority begins with our minority communities because many moderates rely heavily on African-American voter turnout to win elections in their marginal districts. Clyburn understands this, and he has campaigned in these districts and contributed to these members. He plays an important role for these moderate members as whip.

In the 112th Congress, we will need Congressman Clyburn’s dedication to thwart Republican efforts to repeal all of the progress we have made on behalf of the American people. I am convinced that we will regain our majority in two short years, but we need a leadership team that will stand up for the principles we cherish and effectively communicate why these principles will create more opportunity for all Americans. Having Congressman Clyburn remain as Democratic whip will put us in the best position to make that happen.

Congresswoman Barbara Lee, who represents Oakland and chairs the Congressional Black Caucus, can be reached through her Oakland District Office, 1301 Clay St., Suite 1000-N, Oakland, CA 94612, (510) 763-0370 or http://www.lee.house.gov/. This story first appeared in The Grio, at http://www.thegrio.com/politics/the-case-for-clyburn-as-minority-whip.php.