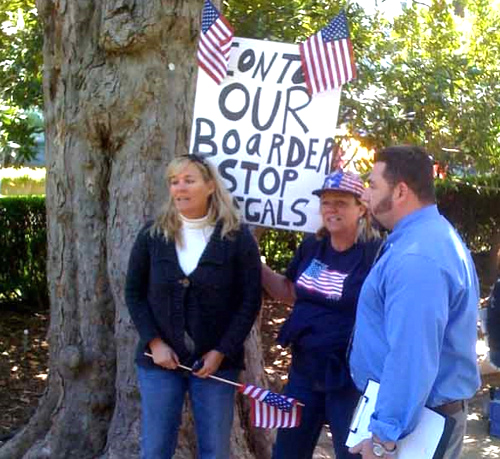 “Unemployed workers are lazy welfare queens,” said Sharon Angle, losing candidate for Senate in Nevada under the Tea Party, in one of her many speeches laced with vitriol and hate for families living in poverty in the U.S.

From New York to California, from Sharon Angle to Meg Whitman, the running theme of hundreds of political campaigns supported by the so-called Tea Party and their Republican counterparts is hate. Hate for us poor mamas, poor people of color, poor families and im/migrants.

“I will end the welfare system as we know it and I will crack down on sanctuary cities for immigrants,” said Meg Whitman, a billionaire Republican who lost her race for governor of California. She and others built their campaigns on a perceived baseline of racist and classist hate that exists in the U.S. for poor folks, immigrants and people of color, which, even if this perceived hate isn’t actually there, is fueled by a constant stream of disinformation and lies that rolls, unchecked, through U.S. corporate-owned media and out of the mouths of corporate politicians.

“Instead of handing out welfare checks, we’ll teach people how to earn their check. We’ll teach them personal hygiene.” In New York, the Tea Party fielded Carl Paladino, another losing candidate for governor, who ran on a platform riddled with myths and lies about poor families and the measly subsidies we get.

Paladino proposed to transform New York prisons into dormitories for welfare recipients, to teach us “hygiene” so we can get “work” for our checks. Again, either because of his own ignorance and arrogance and/or to cede the base-line fascism of the U.S., he fails to mention that we poor parents who receive the tiny amount of cash aid grudgingly given by the state always have to “work” for that subsidy through the welfare to work program, work we have done for years. There is in fact no “free money” in the U.S. scarcity models of welfare.

From calling migrants “terrorists,” as Angle has done many times, to claiming that we need to incarcerate illegals for just that, being “illegal,” as Whitman has said many times, all of the Tea Party and Republican candidates have consistently used immigrants of color to cede hate and a perceived racism that apparently lurks everywhere in the U.S. But does it?

Is this overt racism and hate for the poor really here? Or is it crafted like a well-oiled Hitlerian machine meant to birth a national hate towards someone, anyone, as long as it’s not the corporations who keep stealing our resources, killing families and poisoning land across pachamama (Mother Earth).

“You are the reason Arnold Schwarzenegger is in office,” my welfare case worker spitted out to me through clenched teeth in one of my food stamps evaluation meetings. My already sad heart dropped to the floor as the words tumbled angrily from her lips.

I’m not sure why she said this to me, maybe for no reason except to make me feel like less than the gum on the bottom of my shoe and/or to make her feel a moment of hegemony-fueled power. But as I watch the current batch of politicians top each other with hate speech for the poor, I keep wondering how hate became political currency in the U.S.

“There but the grace of god go I,” goes the old saying my mama used to tell me about folks sleeping on the street below our run-down East LA apartment window. Then, after my mama became disabled, unemployed and without resources, there we were, on the street, in our car, sleeping on top of all of our clothes, being viewed as trash, bums, lazy and all the other ways peoples are stereotyped and silenced with words and names and casual hate.

What I do know is one of the reasons Whitman, Paladino, Angle, Rand Paul, Christine O’Donnell and all of the Tea Party/Republican candidates continue to use poor mothers and children and immigrants is because they can. Because we don’t own Clear Channel or YouTube, NBC, ABC, FOX or the New York Times. We don’t own the channels of information and access and so we can be easily lied about, talked about, disrespected with hateful impunity.

“We want to make all of California a sanctuary state,” said Carlos Alvarez, the un-heard gubernatorial candidate of the Peace and Freedom Party in response to a question by me in a recent interview on PoorNewsNetwork, on his party’s policies on im/migration.

Not only are the “other” candidates – candidates not running on hate or multi-million-dollar campaigns – shut out and silenced, sometimes they are even arrested like Laura Wells, the Green Party’s candidate for governor California, when she attempted to attend the billionaires’ club debate between Jerry Brown and Meg Whitman. Which is why the inclusion of Jimmy McMillan of the Rent Is Too Damn High Party in a recent debate in New York was so revolutionary.

“Landlords we are coming to get you,” McMillan warned. Since his recent involvement in the debate, Jimmy McMillan has raised money and gained massive popularity across the country, which leaves me thinking that the deep racism, classism and hate that fuels the Tea Party is based on the ongoing exclusion and silencing of truth and true voices in the U.S.

That’s why I, as a poor mama who has been called a welfare queen, lazy, trash and all kinds of other classist and racist slurs and spent my life making sure that my voice and that of my fellow poor folks are not only heard but listened to, recognized and included, have a proposal. I think that we should re-name the euphemistically titled Tea Party and all their Republicrat friends and supporters the Hater Party. And if, goddess forbid, they ever win the majority in Congress, the U.S. should be known during those years as Haternation.

Tiny, aka Lisa Gray–Garcia, is a poverty scholar, revolutionary journalist, PO’ Poet, spoken word artist, welfareQUEEN, lecturer, mixed race mama of Tiburcio and daughter of Dee and the co–founder and executive director of POOR Magazine/PoorNewsNetwork. POOR is a grassroots, non–profit arts organization dedicated to providing extreme access to media, education and arts for youth, adults and elders struggling with poverty, racism, disability and border fascism locally and globally. Tiny is a teacher, multi–media producer and author of “Criminal of Poverty: Growing Up Homeless in America,” published by City Lights.