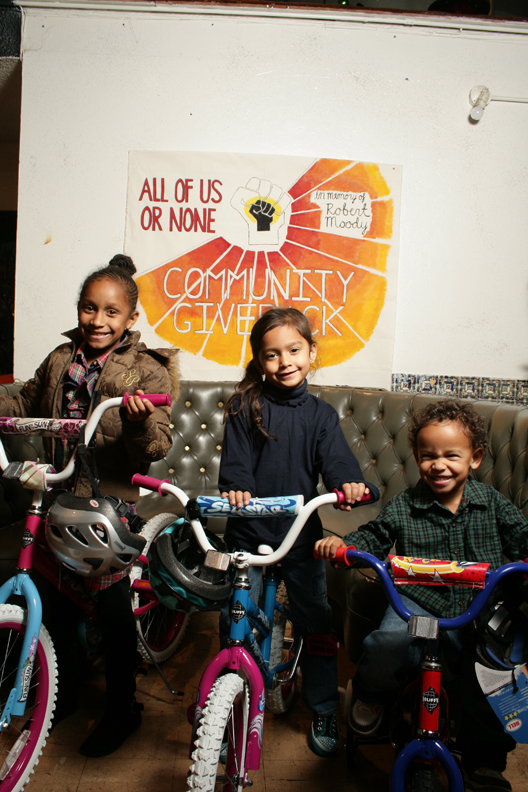 Menlo Park, Calif. – This year marks the 11th Annual Community Giveback – an event where bikes, toys and gifts will be given to children; but they are not the average kids. Eleven years ago a group of formerly incarcerated people, with the help of prisoners, started to give away bikes to the children of incarcerated parents.

“We know how hard the holidays are for families whose loved ones are incarcerated,” said Richard Stamper, a resident of East Palo Alto (EPA) and member of All of Us or None, a national organization that advocates for the human rights of formerly-incarcerated people, and a project of Legal Services for Prisoners with Children.

This event is particularly significant due to the fact that the community of East Palo Alto is still mourning the loss of a community leader, activist and dear friend of many – David Lewis – a revered formerly-incarcerated man who helped transformed the lives of many people in the once-regarded murder capital of America. “This Christmas will be one of the most difficult holiday seasons due to David’s absence,” shared Zoe Wigfall another resident of EPA and someone whose life was transformed with the help of Mr. Lewis.

“He meant a lot to me and the entire EPA community. Nonetheless, we must move on with our goal and that is to put a smile on children’s faces coming from their parents who can’t be with them during the holidays. We also want to remind the children that they have a whole community of people who care about them.”

Since its inception, the Community Giveback has been made possible solely by the very generous donations of bikes, toys, money and individuals volunteering their time. It started with the time, efforts and commitment of a group of prisoners in San Quentin who wanted children who had incarcerated or absent parents to know that they were loved regardless of their current circumstances.

The event that began in prison with the restoration of used bikes by the hands of prisoners has transformed into a community effort led by an organized group of formerly-incarcerated people, family and friends, who are trying to win full restoration of their civil and human rights throughout the country. 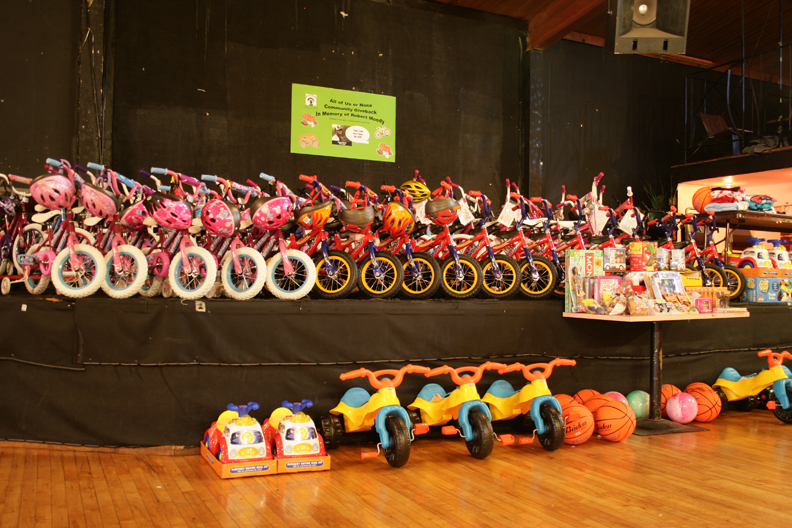 Most of the people, however, who attend these events only see the excited children receiving things, and a lot people don’t actually see the real value. “Most of the people who have been asked to assemble the bikes or to restore a bike are people who were considered disposable to society, including former ‘gang members,’ ‘drug dealers’ and ‘recovering addicts.’” explains Dorsey Nunn, co-founder of All of Us or None and executive director of Legal Services for Prisoners with Children. “They come out days earlier and work for free, and when the money is right we provide lunch. The only real promise I make to them is that they will have an opportunity give a bike away to a kid.”

All of Us or None is not only trying to win the hearts of many children, but also aim to change the public’s perception of formerly-incarcerated people who are making a difference in their respective communities. “This act is special to me because I get to see injured people heal and truly understand the saying that it is better to give than to receive,” concludes Nunn. “And the fact is that there are many of us out there, but for some reason negative publicity transcends such positive work.”