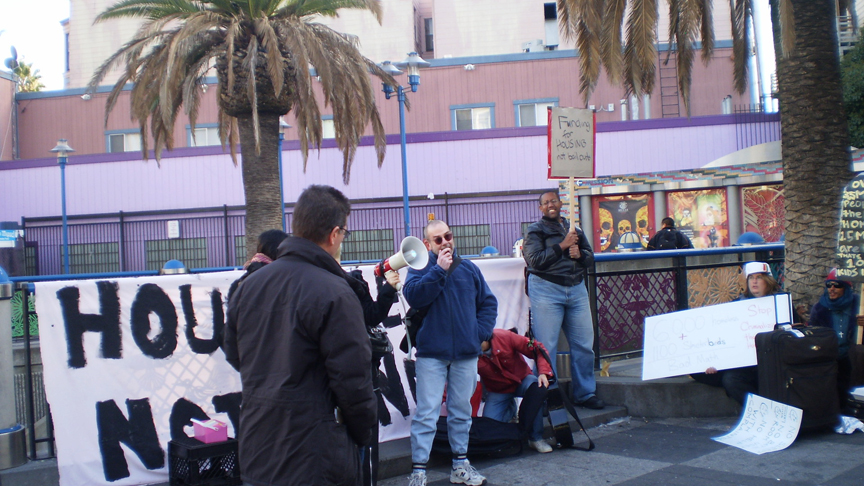 On Black Friday 2010, at 16th and Mission in San Francisco, Creative Housing Liberation held a “Housing Harvest” rally with songs and speeches followed by a tour of four vacant neighborhood properties.

The event was preceded on Thursday by a housing takeover intended to showcase some of the 36,000 units currently wasting away vacant in the city and to publicize the quiet savagery of 36,000 unused spaces in a city where, officially, 6,000 city dwellers sleep on cold concrete, with an estimated count of 15,000 homeless.

Paul Boden, Western Regional Advocacy Project director, reminded the crowd of “allies in Portland, Seattle, Santa Cruz, L.A., Oakland and Berkeley,” poor Chicagoans, public housing residents’ homes demolished, homeowners losing homes through bad mortgages – all “resisting and fighting back.” Millions across the country and this world are being dehumanized by the commodification of housing, he said.

In a Wednesday night promotion for the Black Friday occupation and rally, occupier Jeremy Miller informed JR of the Block Report on KPFA’s Hard Knock Radio that housing occupations are being conducted worldwide – in Brazil, Argentina, Venezuela.

Former Black Panther, now revolutionary journalist Kiilu Nyasha told the crowd homelessness kills. “They don’t want you to know how many people are literally dying on the streets of this very rich city.

“People of the city – of the world – we have to unite. We have to embrace each other’s differences and come together based on our common human rights. We have a right to a home.”

After S’Bu Zikode showed a film Wednesday in San Francisco about the South African shack dwellers movement, he told Kiilu, “The young people are saying, ‘No Land. No House. No Job. No bread. No vote.’”

“The next time these horrible politicians come banging on your door,” Kiilu insisted, “you just tell them, ‘My vote is a vote of no confidence.’”

M.C., organizer and MSW James Chionsini explained to Catherine Errey and me how he clarified for his 4-year-old daughter Helen that the deprived rich don’t understand people enjoy sharing things like cookies and housing. He felt the American Psychiatric Association’s DSM IV should classify greed as a treatable emotional disorder.

M.C. Lydia Heather Blumberg asked the 100-strong crowd, “Aren’t you guys glad we had something more fun to do than go shopping today?” 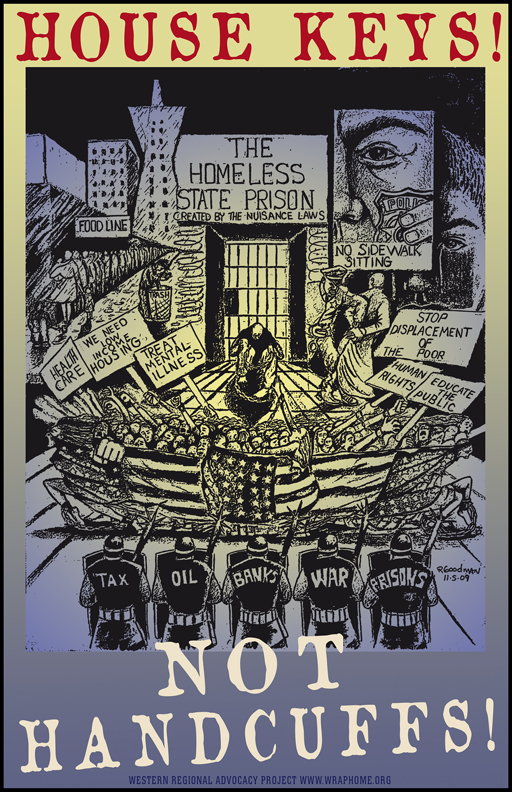 Creative Housing Liberation is not a formal organization. It is the organizing name for one or more events conducted under a loosely knit network of like-minded citizens distressed by San Francisco’s current housing crisis. Participants agree that civil disobedience and direct action are necessary to defend and advance the need for access to housing for working class people in San Francisco. 2010 has been a year of at least six San Francisco direct action housing demonstrations, five of which have included a public takeover of vacant housing.

At Easter, Homes Not Jails occupied the San Jose Avenue home of Jose Morales, 78, evicted after 42 years through an Ellis Act takeover by a bad-faith landlord.

After 18 years of disuse, on May Day the Phoenix School at 15th and Mission was squatted. One occupier said, “The state used a sickening display of force – two SFPD battalions.” Eighty riot cops, “disappointed they didn’t get to discharge their weapons,” overwhelmed “eight people, who were voluntarily arrested.”

In response to the 150 Otis homeless shelter closing, next came the sit-in at 170 Otis, the Health and Human Services Administration Department building, organized by Direct Action to Stop the Cuts with help from Food Not Bombs and leaders in the homeless and housing rights movement in San Francisco.

On July 18, the organizing group Direct Action to Stop the Cuts successfully, and with much publicity, occupied the Sierra Hotel at Mission and 20th. According to city records, the multi-unit property was vacant almost 20 years. This action, in part, protested slashes in the city budget to housing and homeless services that are expected to result in an increased rate of homeless deaths this year.

On Oct. 10, 2010, World Homeless Day, Creative Housing Liberation led an open occupation of the Leslie Hotel on Eddy. After a Civic Center rally, activists led the public on tours through a beautifully-appointed 68-room apartment building left vacant two years by a landlord living in Europe. Unhoused folks regularly sleep on the vestibule and surrounding Tenderloin sidewalks.

Matt Crain noted that 14 out of the 18 (occupiers) were 100 percent committed to taking a voluntary arrest if they had collectively chosen to do so. However, the residents made a decision to vacate the premises before eviction, demonstrating that housing occupations need not end with voluntary arrest if the occupiers choose otherwise.

“The fact is these folks care about a lot of issues. Housing is very personal to them. Sixteen of the 18 folks who occupied on World Homeless Day were formerly homeless or currently without housing. Stated Matt, “Many (are) squatters who choose to occupy and take direct action every day – not just Housing Demo Day – by living in abandoned buildings and not going through the system.”

Now that San Francisco voters and merchants have passed Proposition L, the sit /lie law, even sitting or sleeping in public while poor has become a crime and resting, in itself, has become an act of civil disobedience.

On the Thursday before the Black Friday rally, in an act of “creative audacity,” participants “pre-occupied” a vacant residential property. They moved in, took a quick look around, and shared a quiet “Thanks-taking” dinner. “Thanks-taking” was an alternative to a day when so many celebrate an illusion, said one occupier, “that our country was founded by brave settlers who created a nation of peace, prosperity and abundance – when not only did we steal the land, but we annihilated an entire race of our fellow man.”

Before the more overtly political public demonstration on Friday, Thursday was to be a private occupation, the occupiers taking care of themselves, learning from each other, sharing the space, a meal and one day together. Then they tried to sleep.

Creative Housing Liberation would like to invite “all kinds of folks, including families,” to be involved in future housing occupations and demonstrations. Families are the largest new homeless group, a number that is skyrocketing since the housing foreclosure scandals and the economic crisis began. Families and immigrants are the most invisible, under-represented segments of the population experiencing homelessness in San Francisco. The network is reaching out to all people experiencing homelessness for their voices to be heard and their stories to be told.

“We secured a laptop, a wifi antenna and routers – with the exception of electricity – everything necessary to do a live stream inside the site.”

They set up a little studio, but the quality of the live stream was poor due to the bandwidth issues of the wireless internet connection.

Once the live stream was up and going, they had a press release ready to go out. They were going to post it online to Indybay.org.

This didn’t happen, but they will try again. At the next housing demo, “We are definitely looking forward to having a live stream showing the inside of the squat.”

The best way for people to find out about the next action is by intermittently checking the Indybay calendar “where our events are always listed.” 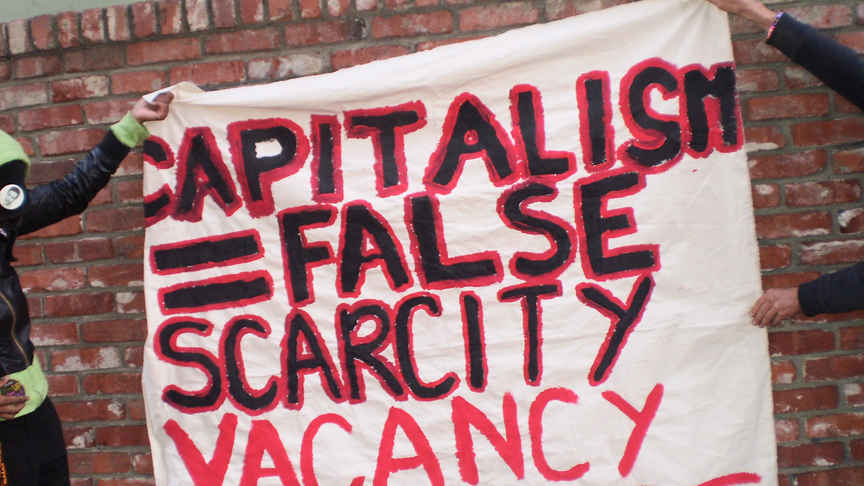 At approximately 6:30 a.m. Friday morning, a property manager did a random check. All occupiers were able to collect their resources and vacate, avoiding interaction with the manager or police.

According to one, “We had secured the place. When the property manager came by in his normal way, he was able to get up the stairs. But once upstairs, he was not able to get to the rest of the property where we were. And we had given ourselves enough time to collect everything and leave.”

“In lieu of the open occupation, we did a tour around the 16th and Mission neighborhood to draw attention back to the Phoenix School, then to 80 Julian St., owned by a non-profit, vacant and squatted for many years, then to 180 Dolores, a beautiful but fortified condo, then a few doors away to 200 Dolores,” stated Matt.

Kim Rohrbach, a volunteer tenants’ counselor at the San Francisco Tenant’s Union, explained how landlords use various legal constructions like the Ellis Act to appear to get out of the housing market, but instead empty a building so it’s more attractive to wealthier prospective buyers. They’re not actually getting out of the housing market, merely “using a legal construction to evict people so they can turn over the property with more ease to landlords who can then jack up the rent seeing that the previous rent-controlled tenants have been removed from the property.”

Creative Housing Liberation organizers and other housing activists who took part in this action “look forward to engaging with and giving voice to all members of our community who are experiencing homelessness, most especially families and those who are undocumented.”

One organizer summarizes the occupation: “We successfully occupied for 28 hours. We shared Thanks-taking Day together. We were unfortunately unable to proceed with the entire demonstration, which would have included an open occupation.” But he looks to future actions.

“We have these resources. There’s no reason why we shouldn’t be sharing them equitably throughout all elements of society.”