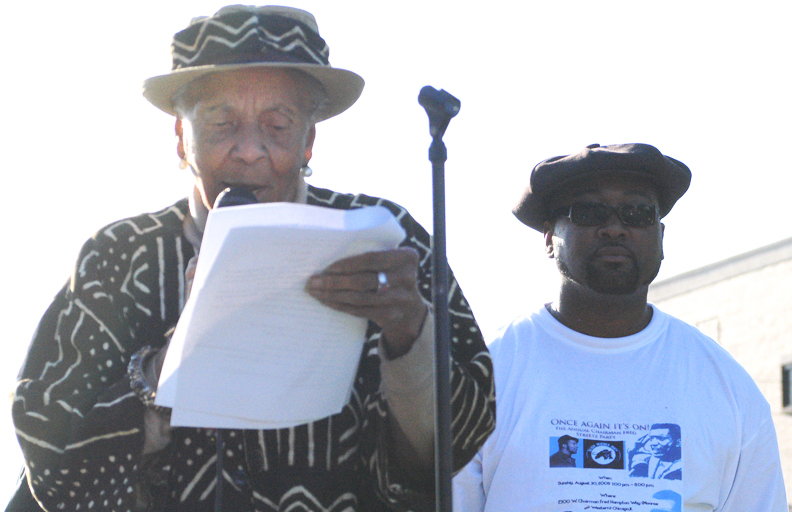 This here is dedicated to the Lady of the Day

That held a pen for Paul Robeson.

Wife of the late Charles Burroughs that just went on her homegoing.

To the Black baby that was born in southern Louisiana,

Who was baptized in real deal conditions and circumstances.

And 95 years later with no self interest in this business,

With her only motivation being the uplifting and

To create better conditions for the masses.

Today, we commemorate this Lady Legend that

Just made her transition.

To the Woman of the spoken word,

The Freedom fighter that even when she spoke softly,

When even in the midst of a crowded room could still be heard.

To the Dedicated Diehard that defended the legacy

Of Jean Baptiste Point DuSable when it wasn’t

No popular thing to do.

To the teacher to so many people whom she educated without due pay,

The Matriarch who refused to do what they wanted

Her to do within the Chicago Public Schools.

To the lil’ Lady that even on a daily basis made giant moves.

Dr. Margaret Burroughs was on a mission and to her dying day

Kept on resisting – now I hope you still listening –

Uncapitulating and refusing to compromise her principles.

And refused to lose. And whom the government banned

Up out of Stateville Prison.

POCC Chairman Fred Hampton Jr. can be reached at chairmanfredjr@gmail.com. Dr. Margaret Burroughs, teacher in schools and prisons and founder of the internationally renowned DuSable Museum, passed Sunday, Nov. 21, at her home in Chicago’s Bronzeville neighborhood.

Haiti! … in one form or another