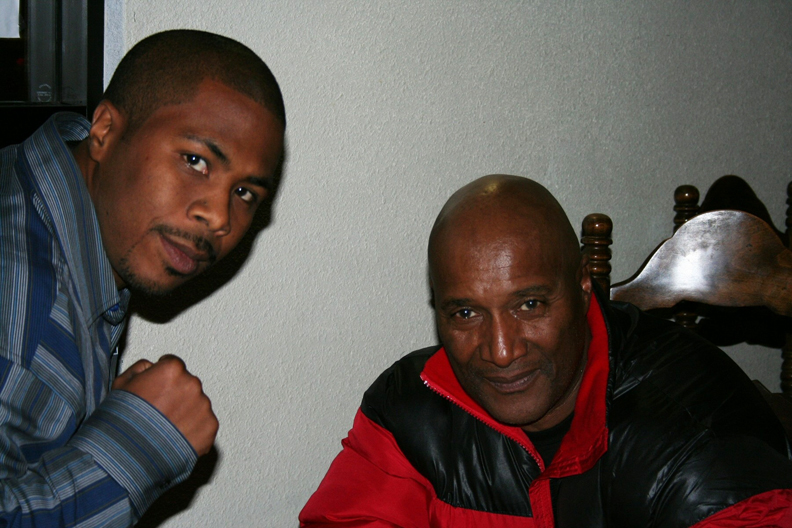 Paul Mooney is one of Black comedy’s biggest breathing legends. Most notably, he partnered up with Richard Pryor to create some of Pryor’s most hilarious stand-up material as well as casting for “The Richard Pryor Show.” He also wrote for “Sanford and Son,” “Good Times.” “In Living Color” and “The Dave Chapelle Show,” to name a few of the monumental television shows that bear his fingerprints.

Every year for the last few years, Paul Mooney ends the year in the Bay doing a series of shows at the Black Rep in Berkeley from the day after Christmas leading up to New Year’s. This year, he will be doing two benefit shows on Tuesday, Dec. 28, at 7 p.m. and at 9 p.m., that will benefit the SF Bay View newspaper. If you are going to support the fundraiser show, you must state that you are here for the fundraiser while you are buying your tickets.

M.O.I. JR: Paul Mooney will be doing benefit shows at 7 and 9 p.m. for the SF Bay View newspaper on Tuesday, Dec. 28, and he will be at the Black Rep in Berkeley from Dec. 26 until New Year’s. Paul, how are you?

Paul Mooney: I didn’t know all of that was going on. You’re telling me stuff I didn’t know, Minister. So I guess you are the minister; we have to listen to what you have to say. I’m OK, man. How are you?

M.O.I. JR: I’m good. We go into this every year about the comedy show. One of the things that I appreciate most about you being the comedy legend that you are is your political critique of the news and your ability to always find some kind of ironic humor in the news.

Paul Mooney: Well, my theme this year for my show is Hallelujah, Bless God, an Egyptian sent me proof that the word nigger, it means God.

Paul Mooney: So, on the money, it’s trust in the niggers, not trust in God. No, I’m serious. The word was found in a tomb in Egypt, and the white people know it. They switched it around. They already know it. They tricked us. They know exactly what it means. It means God. That’s why I’ll never get rid of it.

M.O.I. JR: So that is the theme of the show this year?

M.O.I. JR: What do you think about the hundreds of thousand of secret documents that Julian Assange and WikiLeaks has leaked about the world’s governments?

Paul Mooney: I think it is hysterical. He was stealing from the government? I think that’s the best. If you could steal from this government, then you’re good, because this government usually does the stealing. Did they steal us? They’re usually the best at it. I just think it is very interesting because they’re usually the best. This is the first I heard of this. This is funny. I haven’t been listening to the news. I’ve been kind of resting. But I think that this is very interesting.

M.O.I. JR: He is supposed to be a computer hacker who is hooked up with some guy who was in the military, who supposedly leaked information to him.

Paul Mooney: He’ll be coming up missing soon. We’ll find him on the railroad tracks, not hearing the train coming.

M.O.I. JR: What movies have you been watching lately? And what is your critique of these movies?

Paul Mooney: About how these white people went crazy. First of all they have drove Black people crazy, because now we are colored again. I don’t know where these “Colored Girls …” are coming from, with all this white lady hair. I don’t see no colored girls, do you?

Paul Mooney: That was back in the day. They’re ain’t no more colored girls. We supposed to be colored? I don’t want to wallow in something white folks called us. That’s what you call your dog or your bird or something you own, you know? We are not colored, we are not negro, we’re not Black, we’re not any of this stuff. What we really are, similar to what I put in when they send me the census, we are stolen Africans. That’s what we are. So that’s the reality of it, this other crap.

You know I have grandkids. I don’t want them asking me what does colored mean. They have no sensitivity when it comes to us. And they already know what we’re about. 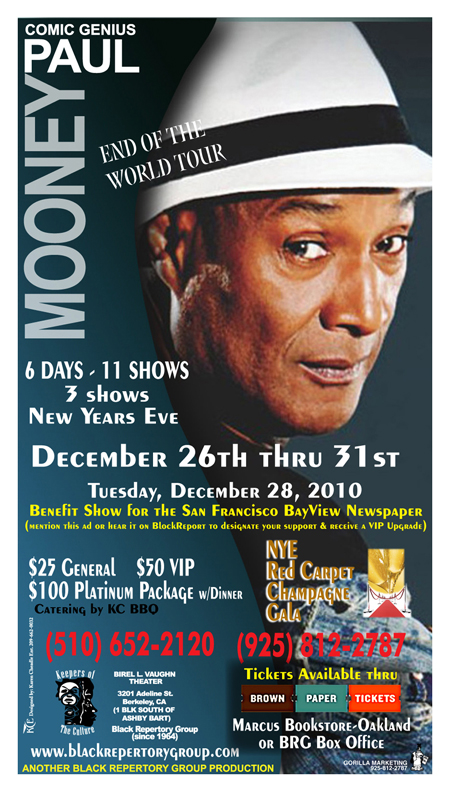 We’re the chosen ones. And that is why nigger means God. And we’ll never lose that. And I stopped saying it, but when I realized what the Egyptians told me, I’m back on it. So praise nigger. We have to wake up to the fact that it is about us and they know it. They just switched it around. Because when they found Africa, they named it the land of Kemet, land of the Black people. So they know it’s all a game. So we gotta learn to play it too.

Paul Mooney: Oh, that’s funny. What are they calling Obama? Hitler? They are calling Obama everything. I just want for him to run again. I want him to run from the White House, because that mess that they gave him … They gave him that bowl of piss. Ok. He needs to give it back to ’em. It’s all a game. You know Bush destroyed this country, him, his daddy and a bunch of them, but they try to act like he wasn’t even in office. They don’t even know his name. They don’t even want to mention him.

M.O.I. JR: What do you think about Oakland going up in flames following what happened with Oscar Grant, and them giving …

M.O.I. JR: Now why would they say that a white man can’t get a fair trial in Oakland? Can you break that down? What does that mean?

Paul Mooney: That means that they are trying to take that from us. They are even trying to take our race from us. Well, white folks steal. They steal everything you have. They recycle it and say that it is theirs. Remember when it was the ghetto, you remember? It’s urban now. They know how to recycle.

M.O.I. JR: What do you think about them leaving us out of the media? I know that you have been one of the pioneers in Black movies, Black tv, Black comedy, Black entertainment as a whole …

Paul Mooney: You know that show that they took off, the one about those Black folks that can speak any kind of language, undercover people, you know? They used to work for the CIA. Remember the pretty Black man and pretty Black baby?

M.O.I. JR: I think I know what you are talking about.

Paul Mooney: The show is off. They cancelled it. They couldn’t handle that. They weren’t cooning enough. You know white folks like that cooning. And they just weren’t giving them that. You know, they dropped it. It was a great show. I don’t know if you saw it.

Paul Mooney: Look it up on the white man’s internet.

I’m shopping too, while I do this. I’m over at the vintage place, at the goodwill helping the poor homeless folks.

But that’s what they do: Our kids are brainwashed. They think Black is evil, and they still think that. So we got a lot of hard work to do. But they are being brainwashed by those white schools, because white people love to brainwash folks – in reality, just for talking about the master. That goes for Blacks too. I’m the enemy. Even if I talk about the master, “Paul is gonna get us in trouble.” You know what I’m saying.

Paul Mooney: Oh, if I would’ve cooned? Oh yes. I would be Brian Allen now. That’s who I would be.

M.O.I. JR: You would be Brian Allen (laughing)?

Paul Mooney: That’s who I would be. You know, I don’t fit the bill. I never have. I don’t have the looks for it. The way I look, the way I talk, how I sound, I don’t fit the bill. White folks just have a certain thing when they love Black people. You’ve been on a job, “I just love Joe. Why can’t you be more like Joe?” You know the game. So it’s like whatever that thing is, I don’t fit it. Whatever it is that it is, Mr. Mooney doesn’t fit it. You know that.

The things that I have done, I created Homey the Clown. I created Negrodamus. If my last name was Goldberg, they would have a statue built of me. You know that. What’s so funny is that you know how long I’ve been doing this, and I’ve been saying nigger, which means God. Me and Richard, we started this a long time ago, you understand? And they are trying to pretend that this is the first time they ever heard any of this, you know? And they never heard any of this, and I’ve been doing this for a long time. Now they are saying it all in their movies. I said that the Italians were Black from Sicily. I’ve been doing this for 42 years. Forty years ago, everybody thought that I was crazy.

Black is definitely the new white, because we don’t do things like this: jumping off bridges committing suicide. They got “The Sleeper” here, the Black serial killer here. They got one back East, because these Black men are turning into white men. Because of integration, they’re imitating under the illusion of inclusion. It’s real sick. We have a lot of hard work to do, but it is very positive, because God’s in charge. And there is a God, and Charles is not in charge, white folks, God is.

M.O.I. JR: Is their God named Charles? What are they saying?

Paul Mooney: You know that movie. Charles is not in charge of this stuff, OK? That is the reality of it. So it is all so funny.

M.O.I. JR: Before we get out of here, tell us about your book I know that you came out with last year.

Paul Mooney: It’s on the best seller list: “Black is the New White.” It’s about me and Richard Pryor and my relationship with Richard and that prejudiced Hollywood. That’s what it is about.

M.O.I. JR: Hollywood, prejudiced (laughing)? We have a Black president. 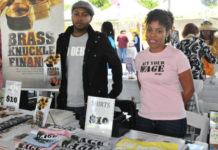