World Boxing Association (WBA) super middleweight champion Andre “Son of God” Ward seems to be having a difficult time finding – and keeping – opponents. A possible reason for this just might be that he hasn’t lost a fight since he was about 12 years old – meaning he is just that good.

Ward didn’t just “survive” this fight. He dug down deep, and matured right before the gimlet eyes of the world, battling back against elbows, head butts, and old school, power punching and brawling, giving as good as he got, not running, turning his back, making excuses or fighting one whit less than his true potential.

But Andre Ward, Son of God, wants to be the best, and he wanted to stay busy after Andre Dirrell pulled out of the Super Six competition. In order to do so, Ward knows that he has to challenge – and defeat – the best. So he took the fight to Bika, and he came out victorious.

Now he has yet another first: He is the first to truly stop Sakio “The Scorpion” Bika, moving his professional boxing record to 23-0, with 13 KOs, while Bika drops to 28-5-2, with 19 KOs.

• Going into 2011 as the only undefeated Super Six Boxing Classic super middleweight semi-finalist. He beat Allan “Ghost Dog” Green, the jive master. Before him, it was Mikkel “The Viking Warrior” Kessler. Then, by default, he beat Andre “The Matrix” Dirrell, when Dirrell had to pull out of the competition due to injury from an illegal punch thrown by Arthur Abraham in the Dirrell-Abraham fight last March.

• First in the Super Six Classic Boxing standings with 6 points

• The only fighter who has fought two “replacement” fighters during the Super Six competition, though the WBA title defense against Sakio Bika was not a Super Six bout.

He will not have to defend his WBA title again until sometime in March 2011, when he is slated to fight Arthur Abraham in a Super Six Classic bout.

And he is on the way to proving himself to be the best pound for pound 168-pound super middleweight boxing champion of the world. So where does Ward go from here? 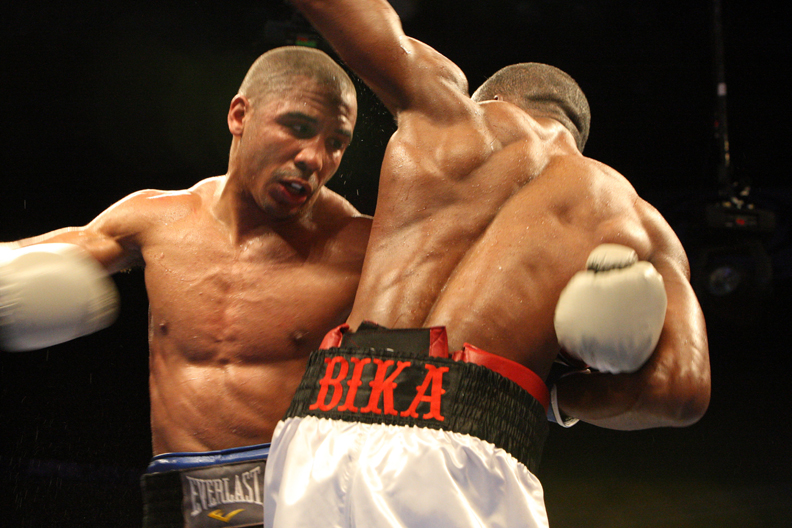 In a very laid back, public press conference on the afternoon of Nov. 24, Andre Ward and Sakio Bika; their respective trainers, Virgil Hunter and Ronnie Shields; Antonio Leonard, the co-promoter of TNT Boxing and Andre Ward’s manager; and Dan Goossen of Goossen Tutor Promotions and also Andre’s promoter discussed their thoughts on the upcoming fight, which was literally moments away. That was the sole focus.

Now after the win, Ward has time to nurse an old injury to his left hand back to health, watch the tape of the fight to determine what he did right and what he did wrong, remain focused, stay humble, and put in the work he needs to do to improve and to keep winning – while he, his camp and promoters determine the venue for his next Super Six title bout.

Las Vegas is being discussed, as his next opponent, Arthur Abraham seems unlikely to want to fight Ward in what has jokingly been called “Ward County,” Oakland.

Abraham, another tough brawler, lost his WBC title bid to Carl Froch in Finland on the same night that Andre Ward retained his WBA title by defeating Sakio Bika.

Recall that Abraham was DQ’d (disqualified) in the 11th round of his Super Six bout with Andre Dirrell for an illegal punch after the bell – the same punch which has caused Dirrell to drop out of Super Six competition with neurological complications.

Carl Froch on the other hand, is WBC champion and 2-1 in the Super Six standings. Abraham is now 1-2, and beltless.

You’d think that Froch would be Andre Ward’s next opponent, not Abraham, wouldn’t you? Confused yet? Don’t be.

The Super Six Middleweight Boxing Classic is a revolutionary idea in boxing competition conceived by Showtime cable TV in 2009, designed specifically for WBA and WBC fighters.

There are three group stages to this competition. Each of six championship fighters has one bout each per group stage, where he can win 3 points for a knockout, 2 for a win and/or 1 for a draw.

The following were the standings in the Super Six World Boxing Classic scoreboard going into Group Stage 3 prior to the Nov. 6, 2010, bout between Allan Green and Glen Johnson:

What? Who? “Gentleman” Glen Johnson? Who is that? Well, as you know, at the end of Group Stage 3, the remaining four fighters with the highest scores advance to the semi-finals, then to the finals. The winner will be crowned the world’s best super middleweight and take home the trophy.

Johnson, from Jamaica, and a man reminiscent in build of the great champion Jack Johnson, KO’d Green 2.34 minutes into the 8th round of a scheduled 12-round bout on Nov. 6, 2010, at the MGM Grand Garden Arena in Las Vegas.

Johnson was Green’s second chance to prove himself after the match-up with Mikkell Kessler collapsed. Green’s mission was to prove that Mikkel Kessler lost to Andre Ward because he (Kessler) didn’t comprehend “jive” as well as he (Green) purportedly did. 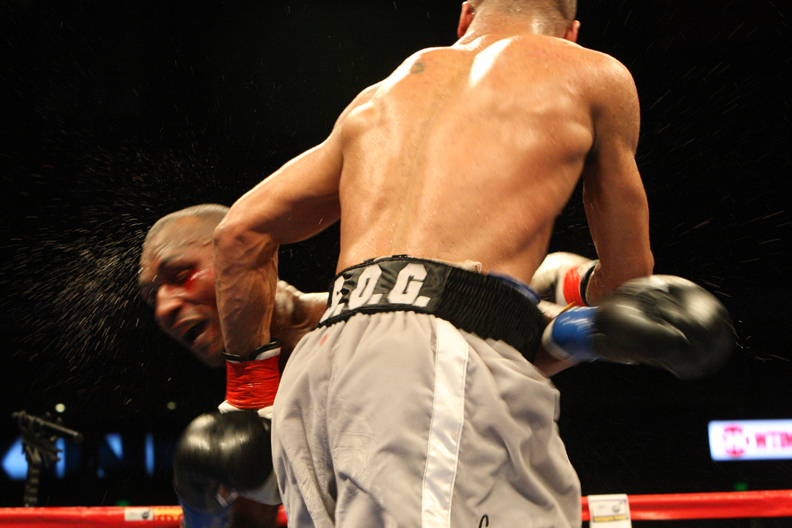 Apparently Allan Green’s comprehension of his own jive didn’t enhance his boxing skills as he’d hoped. Exit Kessler due to injury. Enter Kessler replacement “Gentleman” Glen, who ended Green’s Super Six career by handing him his head as well as his second Super Six defeat.

So now, Allan Green is gone, jive and all, replaced by a replacement. Green’s record, an ignominious 0-2 with no points, is gone with him, and “Gentleman” Glen Johnson is the “new kid on the block.”

Lastly, Andre “The Matrix” Dirrell – slated to fight Andre Ward – suddenly vacated the arena as well, after his camp spent months objecting to Oakland as the venue for his Super Six classic and WBA title fight with Ward. No one doubts that the neurological injury that he suffered at the hands of Arthur Abraham’s illegal punch is still bothering him.

But Ward, who was still slated to fight on Nov. 27, was now minus an opponent. Enter world-class contender, former year 2000 Olympian and former International Boxing Organization (IBO) champion Sakio “The Scorpion” Bika, resident of Australia and native of Douala, Cameroon, which is located in Central West Africa.

Sakio Bika was not Andre Dirrell’s replacement in the Super Six World Boxing Classic. But he (was) Andre Ward’s next WBA title belt challenger.

Well – Bika is now gone as well. And the four requisite semi-finalists are now in place. The new and current standings show the following:

So, literally, the music stopped playing and the dust cleared, and Andre “Son of God” Ward was the last man standing. Undefeated and on top.

Well, well, well, isn’t psychology a dangerous thing? I mean, what are the odds of something like this happening? Go figure. 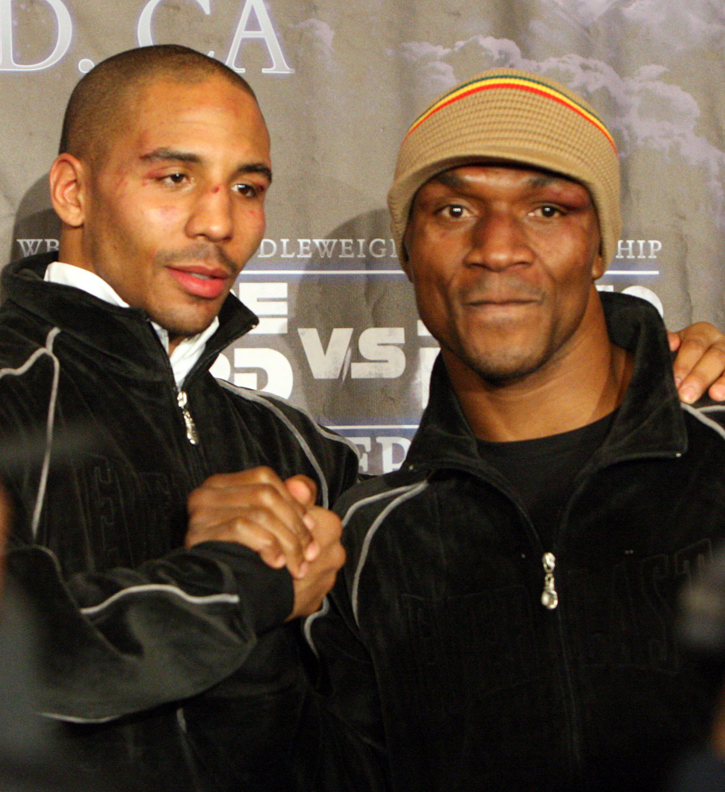 Oh – and a word to the wisest of Andre Ward’s future opponents, should they decide to challenge him: Listen to Virgil Hunter, Andre Ward’s trainer, very closely when he speaks.

At past pre-fight press conferences and weigh-ins, Mr. Hunter has “promised” Andre’s opponents that they would be dissected and defeated. And so, they were: ALL of them, and in precisely the ways in which he described:

On Nov. 24, at the final pre-fight Ward-Bika press conference, Hunter said: “I’ve seen Sakio Bika get hurt on a few occasions and it intrigued me how he did get hurt and how he knows what to do when he gets hurt. Sakio Bika is a very determined and aggressive fighter and we know how to neutralize that. We wish Sakio Bika luck. By luck, I mean that he goes home to his family intact.” Hmmm …

Those of us who were present in Oakland’s Oracle Arena on fight night Nov. 27 saw a rare, “split-site” double header, as Carl “The Cobra” Froch met and defeated “The King” Arthur Abraham, in the Hartwall Areena in Helsinki, Finland, in the final Group Stage 3 bout of the Super Six tournament, becoming the new WBC super middleweight champion. The fight was televised on same day delay.

At both the pre- and post-fight press conferences, Andre Ward, as always, thanked God for the opportunities that he has received and stated that he doesn’t take this time in his life for granted. That he takes his job very, very seriously. (He was training on the 25th, which was, in this reporter’s opinion, a better use of the day than to celebrate the massacre of indigenous peoples.)

And as always, he feels that he still has much work to do, that he is prepared mentally and physically, whether there are two fans, 200 fans or 200,000 fans in the stadium, that he has a job to do and he intends to do it. 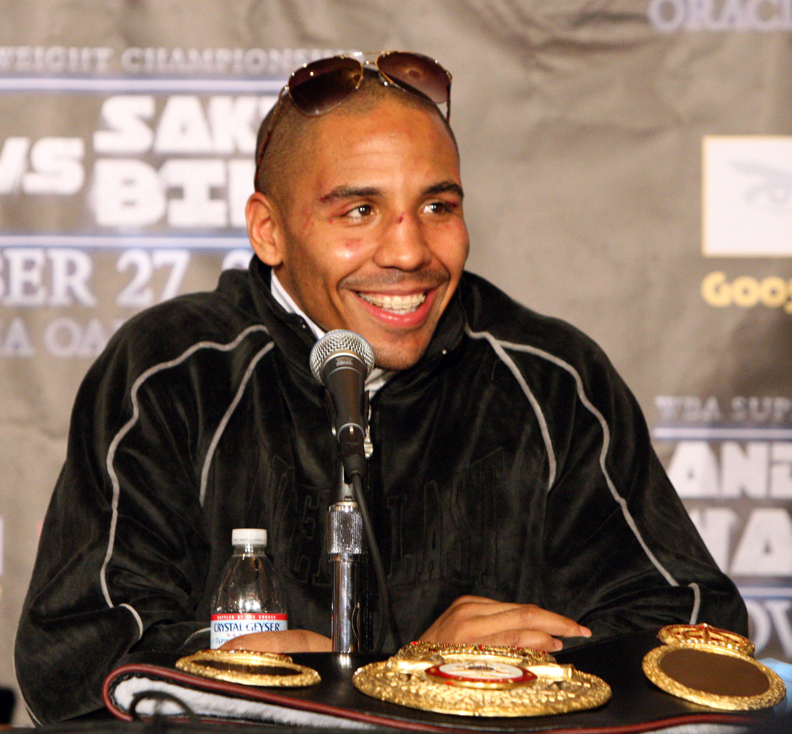 Sakio Bika, who felt that he could “handle Ward” fighting on the inside or the outside, didn’t care about Ward’s boxing style and thought he could take Ward’s WBA title, was proven wrong.

He thanked Ward for the opportunity to try. He did this before and after the event, in fact, calling Ward a “great champion.”

Andre Ward’s actions have been consistent with his words. He has proven that it takes hard work to get to the top and that once you get there, it takes more work and harder work to stay there.

Andre Ward is the man with the dangerously fast left hand. Blink, and you’ll miss it, but it won’t miss you.

Andre Ward has no illusions. He says that he is just as hungry as any opponent he fights, despite his championship status. He points to Bika’s tendency to become unraveled when things go against him and says that he will use this and other strategies to look for a knockout if Bika is hurt, exhausted or both.

Whatever the conclusions – the head butts, the elbows thrown, the physicality of the fighters, their professional hopes and dreams – this fight was a dangerous fight. The mere absence of so much pre-fight trash talking should have been indicative of the seriousness of the warriors going into battle.

But you know Ward has a habit of making all of his opponents look very delusional – even before the fight. They keep thinking that they can beat him – and he keeps proving them wrong.

Goossen Tutor Promotions and TNT Boxing promoted this night of World Championship boxing, with the championship bout in association with Golden Boy Promotions, the promoter for Sako Bika.