Haiti held its $30,000,000 fraudulent demonstration election on Nov. 28, but we still don’t know if or when a run-off will take place, or who will be the candidates. It’s such a mess that Haiti’s international rulers are sending in a commission to try one last time to give a whiff of legitimacy to a totally illegitimate and corrupt process. 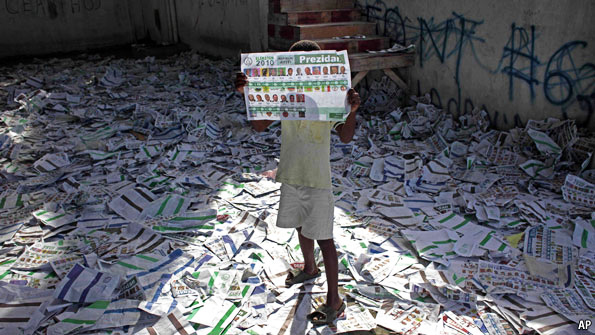 The day after a visit by U.S. Secretary of State Hillary Clinton, Haiti’s Electoral Council ruled that for the 2009 senatorial elections, Fanmi Lavalas, Haiti’s largest and most popular party, founded by twice overthrown and currently exiled President Jean-Bertrand Aristide, could not run candidates. This decision led to an electoral boycott that saw fewer than 10 percent vote in the first round and far fewer in the run-off. Nevertheless, President Preval and the “international community” – the United States, France and Canada, with the United Nations acting as surrogate – recognized the results.

In these 2010 presidential elections, the Electoral Council, without giving any explanation, ruled that neither Fanmi Lavalas nor more than a dozen other parties could participate. Preval was reported to have said it would take only 4 percent of the vote to win, indicating that the suppression of voter turnout might be a campaign tactic. Although Preval has ties to many of the candidates, he favors Jude Celestin, who, according to differing reports, is either engaged or married to Preval’s daughter.

The Obama administration spent $14,500,000 on these elections, funneled through USAID, despite 45 U.S. congresspeople’s warning they would not be free and fair, and their call for the participation of banned parties, in particular Fanmi Lavalas. The candidates spent millions of dollars promoting themselves, an insult to the potential voters they courted, huddled in miserable tent and tarp encampments.

The government used voter rolls from before the earthquake, containing the names of many of the 250,000 people who had died. People had no idea where to vote. One woman went to six polling places in Port au Prince, another to four, looking for their names on lists. People looking for their names created long lines at polling places, falsely reported by international media as people lined up to vote. In addition, the number of polling places had been reduced from around 12,000 in the last genuinely democratic election in 2000 to fewer than a thousand this time, helping to create the appearance of a large turnout while keeping turnout low.

In a polling station in the north, one candidate said that when poll observers arrived at 6:45 a.m., they were told that the voting was over, reminiscent of fraudulent elections held under Duvalier and subsequent military dictatorships when ballot boxes were stuffed before voting began. This complaint was heard in different parts of the country. Official results claim that 23 percent of the electorate voted, but on-the-ground observers claim turnout was much lower.

By noon, 12 of the candidates, including Michel Martelly and Mirlande Manigat, had joined together to denounce the massive fraud and demand the elections be cancelled. That evening, however, Edmond Mulet, head of the U.N. occupation forces in Haiti, called them both to say they were in the run-off, and they withdrew their opposition. Then the results were announced: Manigat, an attorney and former first lady who represents the interests of Haiti’s elite, first, and Celestin, a government official in charge of infrastructure reconstruction in Haiti, second, with Martelly, a musician with close ties to Duvalier and successor death squads and coup leaders a close third. (See http://www.haiti-liberte.com/archives/volume4-22/MichelMartelly_Stealth_Duvalierist.asp.)

Protests broke out all over Haiti. The media credited the outrage to Martelly supporters, but people from many political tendencies protested the phony elections, the exclusion of Fanmi Lavalas, the U.N. occupation and the role of U.N. troops from Nepal bringing cholera into Haiti. The “international community” has sent in an electoral commission to “recount the votes.” The people of Haiti say there’s nothing to recount – garbage in, garbage out.

A report by the Center for Economic and Policy Research states, “The amount of votes not counted or counted wrong in this election is huge … Based on the numbers of irregularities, it is impossible to determine who should advance to a second round. If there is a second round, it will be based on arbitrary assumptions and/or exclusions.” The majority of Haitians claim there should be new free and fair elections with all parties participating.

But this goes counter to the purpose of these “demonstration elections” in the first place, which are designed to isolate Fanmi Lavalas to PREVENT real grassroots democracy in Haiti, to put a “democratic” face on a military occupation, to provide an illusion of “democracy” to ensure a stable investment climate, and to “demonstrate” to the populations in the occupying countries that their troops and tax dollars serve a useful purpose.

Fanmi Lavalas and the Lavalas movement overwhelmingly have shown their popularity and influence in every election since 1990, when Aristide was elected with 67 percent of the vote. The Haitian majority loves President Aristide, who put the needs of poor Haitians ahead of the demands of international bankers, though by doing so created powerful enemies. (See http://haitisolidarity.net/downloads/We_Will_Not_Forget_2010.pdf.)

Since the ruling elites could not defeat him through the electoral process, they turned to other means, culminating on Feb. 29, 2004, when U.S military and diplomatic personnel kidnapped the president and his family and flew them to the Central African Republic. U.S., French and Canadian troops occupied Haiti, until 8,000 U.N. troops replaced them. That number rose to the current 11,500 personnel on the ground – military and police – after the earthquake, and now the media is speculating even more troops will be sent to fight “gangs” and “unrest,” when the true purpose of these troops is to quell political resistance to the occupation.

These foreign troops, along with Haitian police and mercenaries, have killed more than 10,000 people in a counterinsurgency operation aimed at destroying the base of Lavalas in the poorest communities within Haiti, but the movement for grassroots democracy continues to be so strong that now the ruling powers have been driven to the extreme of continually increasing the number of occupation forces and prohibiting Fanmi Lavalas participation in the electoral process, because they know Lavalas candidates will win.

So they spend $30,000,000 on this exercise in un-democracy through non-election:

To pretend stability exists in a profoundly unstable situation.

To pretend that more than a million people are living normal, stable lives, not in tents and under tarps, because they have no homes, no sanitation, no cooking facilities and no clean water.

To pretend that more than a tiny portion of donated aid has been delivered and distributed fairly.

To pretend that more than 5 percent of the rubble from the earthquake has been cleared.

To pretend that U.N. troops from Nepal did not introduce cholera into Haiti.

To pretend that Haitians want any elections in which the largest and most popular party can’t run candidates.

To pretend that President Aristide isn’t Haiti’s most popular and respected leader, and that people don’t want him back in the country.

To pretend that democracy exists in the first place. But it doesn’t. How will this pretend electoral fantasy play itself out? Stay tuned.

To sign the petition sponsored by the Center for Constitutional Rights and Institute for Justice and Democracy in Haiti demanding fair, inclusive elections in Haiti, CLICK HERE.

Charlie Hinton is a member of the Haiti Action Committee and works at Inkworks Press, a worker-owned and collectively managed printing company in Berkeley, Calif. He is the author of “From Jackboots to Wingtips: The evolution of Nazi Economics from World War II to the Present,” available upon request. You may reach him at ch_lifewish@yahoo.com.