What makes San Francisco Mime Troupe the award-winning theatre it is is its amazing work, which is always topical and timely. Its current production, July 1-Sept. 10, “Walls” is no different. Playwright and SF Mime veteran Michael Gene Sullivan’s new work looks at federal immigration policy from George W. Bush and William Jefferson Clinton to Barack Obama and Donald Trump. 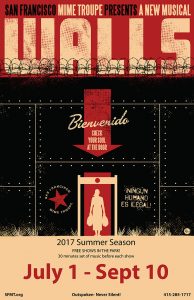 The quartet has much in common, each president responsible for policies which criminalize its immigrant population. Surprisingly, we hear President Obama often on the issue, his tenure one of the more draconian against immigrant populations. “Walls” looks at the xenophobia such scapegoating fosters, along with hate crimes masked by pseudo-patriotism. Heavy? Yes, but the pacing, excellent direction, cast, Mime Troupe humor, stunning songs and surprising rumba, make the medicine easier to swallow.

At center in “Walls” is a love story between ICE agent L. Mary and recent arrival Zaniyah Nahuatl (Marilet Martinez) who trembles every time she thinks about the crossing from Mexico into America. Zaniyah lives with Mary, who wants her to stay hidden. L. Mary wants to keep her girlfriend safe, while Zaniyah Nahuatl wants to earn some money to send to her mother back home. While L. Mary is at work hunting down illegal immigrants – the case load ever increasing – at home, Zaniyah cooks and cleans and takes care of the house. Zaniyah speaks to her mom often on the phone and, though justifiably paranoid, ventures out into the neighborhood to shop at Somali immigrant Bahdoon Samakab’s store.

The two hit it off immediately, dancing around the store as they swap immigrant stories. Samakab (Rotimi Agbabiaka) is a successful businessman whose income supports his immediate family and relatives at home in Somalia. He is not illegal or undocumented, yet neighbors in the community who once befriended him over his 25-year tenure now treat him with scorn because he is Muslim and an immigrant. As Samakab juggles hard work and financial responsibilities, he complains to his mother, whom he speaks to daily, about his son who loves all things American except honest labor.

Lastly there is Irish ICE agent Cliodhna Aghabullogue (Lizzie Calogero), who is vigilant in ridding the nation of terrorists and criminals. Cliodhna thinks she has to divorce herself from her homeland to be authentically American, a land and people she loves, perhaps more than they love her.

The drama takes place on the backdrop of a crippled Lady Liberty; her head sits on stage with weather vane crown and one foot. The scale is missing as is any semblance of compassion. When “Walls” reaches its climax, Cliodhna says to Zaniyah that she is not interested in her story or reasons for being in America. It is not surprising that when the tables turn, the same agency, ICE, is unsympathetic to Cliodhna as well.

If ever the statement by Martin Niemöller (1892–1984), prominent Protestant pastor, regretting his inaction and support of Hitler’s regime is apropos, it is now: “Then they came for me – and there was no one left to speak for me.” L. Mary too has much to atone for when “Walls” concludes.

As the audience at Dolores Park packs up, we wonder what our country would look like if such immigration policies didn’t exist. “Walls” certainly put a damper on what could have been a day of jubilation for the home team (smile). However, until the walls come tumbling down – visible and equally impermeable invisible ones – this nation will not know freedom, and Frederick Douglass’s question will remain unanswered. Visit sfmt.org or call 415-285-1717 to find out when a performance is coming to your neighborhood, as this free community theatre makes its rounds in Northern California with multiple stops in San Francisco, Oakland, Berkeley, Sacramento, San Lorenzo, Richmond, Mill Valley, Point Arena, Merced, Petaluma, Ukiah, Davis etc.