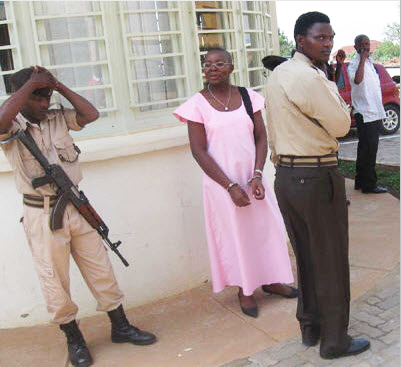 Her preventive detention order had expired during the Christmas holidays, but the judge ruled that her case had been transmitted to the court for the evidence stage thereafter. Ingabire remains in Kigali’s infamous 1930 maximum security prison.

On Jan. 18, two days before the verdict, President Paul Kagame informed a press conference that Ingabire will face the laws up to the exhaustion of the process.

“Who is the judge strong enough to contradict him in Rwanda?” asked FDU’s spokesperson Sixbert Musangamfura, writing from exile in Finland. “Only God.”

Jan. 16 was the anniversary of Ingabire’s return to Rwanda to attempt to run for president against incumbent and staunch U.S. ally Paul Kagame. She was arrested in April and charged with “genocide ideology,” a speech crime unique to Rwanda, which means disagreeing with the received history of Rwanda’s epic 1994 massacres known as the Rwanda Genocide and/or disagreeing with the Rwandan government. She was then confined to Rwanda’s capital, Kigali, and her party was not allowed to register or register her candidacy. On Oct. 14, she was arrested again and she has remained incarcerated since.

Bernard Ntaganda, another Rwandan presidential candidate who might have had a chance to win had he been allowed to run, also remains in Kigali’s 1930 maximum security prison while a judge considers the prosecution’s plea that he be sentenced to more than 10 years in prison.

San Francisco writer Ann Garrison writes for the San Francisco Bay View, Global Research, Colored Opinions, Black Star News, the Newsline EA (East Africa) and her own blog, Ann Garrison, and produces for AfrobeatRadio on WBAI-NYC, Weekend News on KPFA and her own YouTube Channel, AnnieGetYourGang. She can be reached at ann@afrobeatcom. This story first appeared on Digital Journal.

Victoire Ingabire Umuhoza in Rwanda: Year one of the struggle for democracy and dignity

by Eugene Ndahayo, Chair of the Support Committee for FDU-Inkingi

Brussels – It’s already a year ago when Victoire Ingabire Umuhoza, chairperson of the United Democratic Forces, FDU-Inkingi, knelt down for the first time and kissed her homeland that she had left 16 years before. 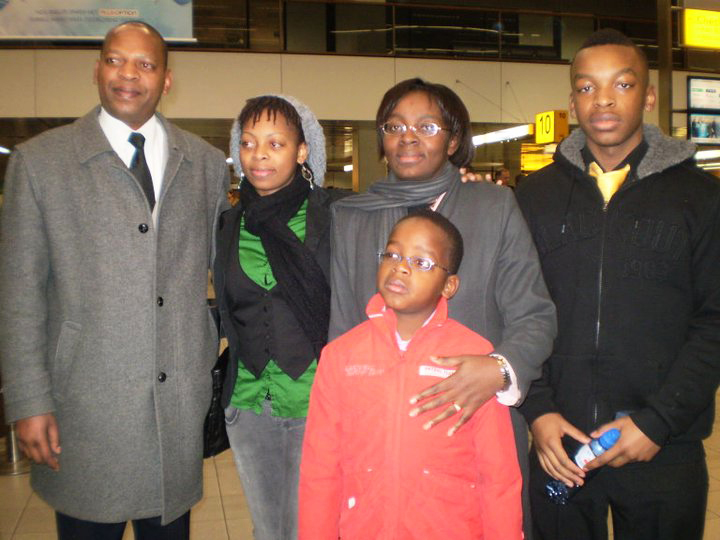 It’s been a year of achievements, dedication and courage – a real struggle for democracy, for freedom, for the right to life and personal security, the right of association, freedom of expression, for political rights. The iron fist of the dictatorship has been challenged.

It’s been a year of solidarity with Rwandans in the country for the right of remembrance for all victims of the Rwandan genocide and other crimes against humanity, for all victims’ rights, for all the voiceless, for the rehabilitation of second class citizens. It’s been a real struggle for equal access, equal opportunities for all the children of our homeland.

It’s been a wrestling against an unfair justice that has deprived Rwandans of the right to a defense of one’s choice and the right to due process. The controversial “Gacaca” justice parody has thrown hundreds of thousands of litigants into humiliating community service with no hope of return.

It’s been a year of solidarity with the people of Congo (DRC) facing the consequences of military invasions responsible of over 5 million victims and the plundering of the country’s natural resources. Since 1990, the whole region has been engulfed in endless turmoil.

The Rwandan president, praised by some people and some partisan media to be a champion, a super star, a development success story, believed himself to be politically invincible.

By her presence in Rwanda, Victoire Ingabire Umuhoza has brought to light the true dimensions of the dictatorship: a totalitarian regime monopolized by a handful of military and ethnocentric militants who, by the means of political police and a sprawling network of secret services, has an upper hand over all public institutions, the judicial and civil society.

In just one year, the regime has accumulated political errors and serious violations of human rights:

– Assassination of André Kagwa Rwisereka, deputy chair of the Democratic Green Party of Rwanda, on July 13, 2010 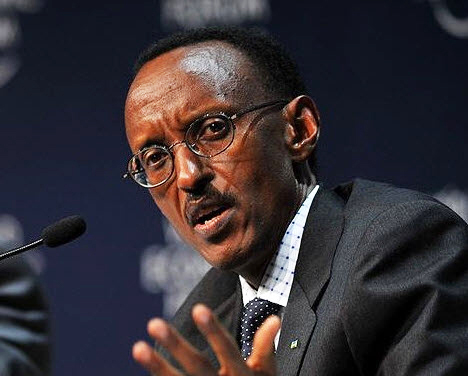 – Kidnapping and arrest of Deogratias Mushayidi, chair of PDP-Imanzi on March 3, 2010

– Arrest of Victoire Ingabire Umuhoza, chair of FDU-Inkingi on April 21, 2010; she was bailed out, placed under house arrest the next day and rearrested on Oct. 14, 2010

– Arrest of Professor Peter Erlinder, a U.S. attorney, defense lawyer for Victoire Ingabire Umuhoza, on June 17; he was bailed out after several weeks

– Arrest of a dozen of party leaders of FDU-Inkingi and PS-Imberakuri on June 24, 2010, who were then released on bail

– Arrest of Theogene Muhayeyezu, Rwandan lawyer for FDU-Inkingi, on June 24, 2010; he was released 15 days later

– Rigged presidential elections on Aug. 9, 2010, with total exclusion of the opposition

– Publication on Oct. 1, 2010, of the U.N. Mapping Report on war crimes, crimes against humanity and a possible genocide committed in Congo mainly by the Rwandan army

Yes, in less than a year, the superstar Paul Kagame has faded from the limelight! The touted and self-portrayed “African new generation leader” is merely a tyrant to avoid.

His apologists are confused and on the brink of losing credibility. How do they justify the total sealing off of political space, assassinations, arbitrary arrests and detentions of democracy leaders? How do they explain the landslide Stalin-style election score of 93 percent? 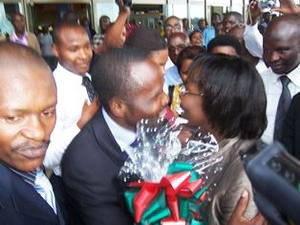 And gradually the economic miracle of sustained growth is appearing to be the result of an unfortunate combination of a criminal economy, unbalanced, uneven and sorry. The Congolese blood minerals and other natural resources have contributed to the miracle.

That is the record of a year of achievements of our chairperson, a record of FDU-Inkingi. Together with all our supporters, we are proud.

Our leader has been held in a maximum security prison since Oct. 14, 2010. We all keep in our minds her words, just a few days after she returned to our homeland:

“I believe in the political project that I share with my colleagues in this struggle, I love my country and all its inhabitants and I know I am not alone in this and Rwandans from all social classes, ethnic backgrounds and generations are with us. It is my source of strength and an oath that I would never betray. I will not waver in my dedication as I promised my colleagues and friends. I know and I have thoroughly thought about it, the regime may persecute me, imprison me. Let me say in conclusion that I am ready to face and endure all the difficulties and obstacles in my way until the final victory. And in case the regime attempts to take my life, I trust you shall continue from where I will fall.”

In prison, where she is incarcerated, the morale of our Chairperson Victoire Ingabire is high. She is free in her mind and soul. Not because of her innocence and belief that the justice system will set her free. No, she does not believe at all in the dictator’s justice. She saw how his judiciary works: trumped up accusations, fake witnesses, witness preparation and rehearsals, lack of independence, interference and orders taken from the State House.

No, she is simply strong because she is courageous and trusts that we shall empower the momentum of the wind of freedom and the seeds of democracy she already sowed.

Thus, our determination, our consistency in the political struggle shall overcome the dictatorship and its international backers or lobbying organizations.