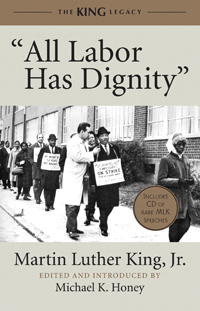 A new Beacon Press book, “All Labor Has Dignity,” brings together 16 of King’s speeches on economic justice, many of them buried in the King archives until now. Michael K. Honey, a former Southern civil rights organizer and the Haley Professor of Humanities at the University of Washington Tacoma, edited the speeches and wrote an introductory essay for the book.

Honey has done a great service in gathering the speeches, said Eric Foner, a professor of history at Columbia University.

“King’s dream called for nothing less than a radical restructuring of American economic life, he added. “This is a more complex King than we celebrate every January, forever frozen on the steps of the Lincoln Memorial delivering his ‘I Have a Dream Speech.’”

“People forget that Dr. King was every bit as committed to economic justice as he was to ending racial segregation,” Honey said. “As we struggle with massive unemployment, a staggering racial wealth gap and near collapse of our financial system, King’s prophetic writings and speeches underscore his relevance for today.”

The first section of Honey’s book covers highlights of the civil rights movement: the Montgomery bus boycott, the student sit-ins and freedom rides, the events leading up to the March on Washington in 1963.

The second section shows King broadening his agenda from civil rights to economic rights for all. He told listeners that “the evil of war, the evil of economic injustice and the evil of racial injustice” are intertwined.

But relationships between organized labor and civil rights leaders were complicated. In his introductory essay, Honey points out that unions were key in establishing the Great Society and civil rights victories in the 1960s. However, one of the largest labor groups, the Congress of Industrial Organizations, in earlier years had expelled some of the strongest civil rights unions for following “the communist line.”

In 1955, when the CIO merged with the American Federation of Labor to become the AFL-CIO, the more racially conservative AFL dominated. It meant that construction trade unions and railroad workers in the AFL continued excluding or segregating women and racial minorities. Also, the National Labor Relations Board didn’t require unions to ban discrimination.

King brought attention to these injustices, such as in the speech from which the name of the book comes. He spoke to Memphis sanitation workers, many of them African-American, in March 1968. They had walked away from their jobs after two fellow workers were crushed by a defective garbage truck. The city had refused to update its equipment, and workers’ families didn’t receive either insurance or workers’ compensation.

It was part of institutionalized abuse. In “Going Down Jericho Road,” another of Honey’s books, he explains how the city, for example, routinely sent workers home without pay when it rained and required extra hours unpaid when it didn’t. There were no toilets available to workers and nowhere to clean up or change clothes.

“You are highlighting the economic issue,” King told the sanitation workers in his speech. “You are going beyond purely civil rights to questions of human rights.”

As the crowd loudly agreed, King spontaneously called for a general strike. All the workers, including teachers, students, housekeepers, commercial cleaners, factory and city employees would not show up for work on an appointed day. As it turned out, however, that day found Memphis shut down by a bizarre snowstorm.

Weeks later, King agreed to return to Memphis for a march on city hall. On the evening of April 3, in the last speech of his life, the “Mountaintop” address, King reached out to the entire Memphis community in what was clearly a union message: “You may not be on strike. But either we go up together or we go down together.”

The following day outside his motel room, King was assassinated.

To offer the most accurate versions of the speeches, Honey painstakingly compared written versions to audio ones.

The CD that comes with the book contains King’s speech to the Retail, Wholesale and Department Store Union District 65 in 1962, when he talked of racism, poverty and war; it also contains his March 1968 speech in Memphis.

It’s clear that as time went on, King saw his mission going beyond civil rights to the rights of all humans to live in decent peace. “Dr. King was a tireless champion of the working class. But ‘All Labor Has Dignity’ is not just a testament to his rhetorical legacy – it is a call to action,” Richard L. Trumka, president of the AFL-CIO, said in a written statement. 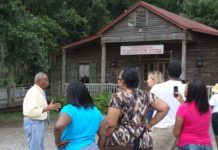