Oakland – On Tuesday, Feb. 22, in preparation for the Public Safety Committee’s informational hearing on the proposed imposition of a gang injunction in East Oakland, community organizations highlighted in a new report, “Betraying the Model City: How Gang Injunctions Fail Oakland,” will describe programs already in place to build strong, stable communities in Oakland. Residents have condemned injunctions as redundant, ineffective, wasteful and harmful. 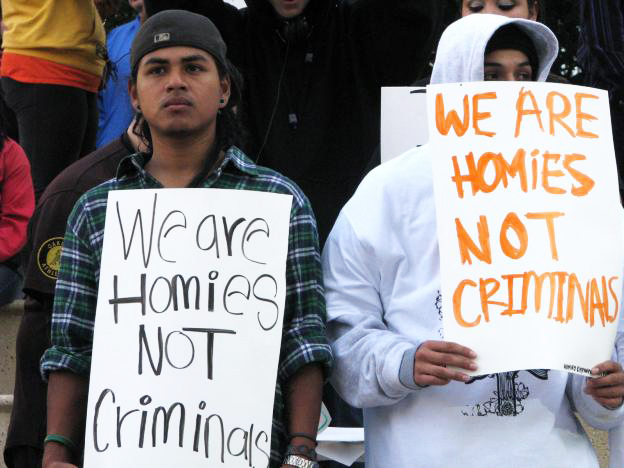 Demands for sustainable community alternatives to gang injunctions come amidst OPD corruption scandals, with the city paying out $300,000 to an East Oaklander who was jailed for two years after OPD officers planted a gun on him. “These are the same officers that would be expected to enforce the injunction in our neighborhoods and this is city money that could have been used to fund some programs for an entire year,” says Maisha Quint of Eastside Arts Cultural Center located in the San Antonio district of Oakland. Quint continues, “This is just one case that shows we need to stop gang injunctions and build real alternatives.”

Detailing the ways they are providing safe, relevant, and accessible after-school programs and youth centers, representatives from Homies Empowerment Project and Youth Together will join Tuesday’s press conference to discuss how investing in quality youth programming is a better long term strategy for building safe communities than investing in increased policing and civil suits. Eastside Cultural Center will discuss why prioritizing affordable housing contributes to the safety and stability of the Fruitvale neighborhood.

As reported in “Betraying the Model City,” the substantial social and financial costs of gang injunctions “divert a tremendous amount of resources from vital programs that could build strong, stable and healthy communities.” While the costs of gang injunctions are devastating to Oakland neighborhoods, community groups throughout the city continue to provide programming that offers more than quick fix solutions at a fraction of the cost.

Community members will also return to City Hall at 5:30 p.m. for the Public Safety Committee meeting to express their overwhelming opposition to the proposed gang injunctions and to encourage the committee to de-authorize the use of gang injunctions anywhere in Oakland.

Taking its title from former Mayor Ron Dellums’ community-based vision of turning Oakland into a Model City, the report, “Betraying the Model City: How Gang Injunctions Fail Oakland,” offers a sharp reminder to new Mayor Jean Quan and the Oakland City Council that civil gang injunctions violate and preclude the vision of building Oakland described by Mayor Dellums as “a coherent, cohesive city, anchored in a vibrant economy, where its citizenry is healthy, well-educated, well-trained, well-informed and capable of effective interactions with the civic, economic, social and cultural institutions of our community.”

It also highlights a different path forward in the struggle to make Oakland a Model City. Reflecting longstanding community demands, the report finds “There are many viable alternatives to gang injunctions that will reduce violence and help build up, rather than tear apart our communities. They include after-school programs and youth centers, alternative ways of dealing with harm, job training and placement programs, drug and alcohol treatment, counseling services, affordable housing, and re-entry support and services for people coming home from prison.”

There are many viable alternatives to gang injunctions that will reduce violence and help build up, rather than tear apart our communities.

After the Feb. 22 meeting, the Public Safety committee will have 10 days to make a decision on the gang injunctions.

A recent story in the Guardian of London reports that “gang injunction powers similar to those in the U.S. came into force in England and Wales” the first week in February. The story, headlined “Gang injunctions just criminalise poor communities,” reports:

“In Oakland, local people have come together to resist the gang injunctions and develop their own plan for a safer city. ‘Our communities will only become safer places when we have secure incomes, when our basic needs for housing, nutrition and health care are met, and when we believe our lives matter,’ says Manuel Fontaine of Plan for a Safer Oakland. These are the things that will make safe and sustainable communities here too. We need real community solutions.”