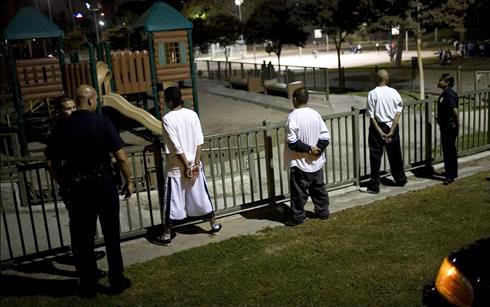 Oakland City Attorney John Russo’s proposed gang injunction is draconian and does not sufficiently address the root causes of crime, according to legal scholars. Barry Krisberg of the University of California, Berkeley, School of Law’s Center for Criminal Justice cites nationwide statistics that overwhelmingly prove gang injunctions are ineffective in all jurisdictions.

The following are but a few reasons cited by Krisberg and others in the legal community on why Russo’s proposed injunction should not be granted:

• At a time when California’s budget is in a record crisis, does Oakland have resources to waste on an injunction that costs hundreds of thousands of dollars to enforce yet will not bring about positive crime reduction results?

• The injunction would increase the distance between police and communities and does not focus on rehabilitation, the reasons why youth join gangs, or the jobs and education which youth so desperately need. Study after study has shown that rehabilitation is over 90 percent effective for this age group.

• A federal judge who is monitoring Oakland police reforms heavily criticized the police department at a hearing and threatened to take it over, the Oakland Tribune reported. Judge Thelton Henderson, who is monitoring the Oakland Police Department because of the Riders scandal, threatened to put the department in “receivership.” If that were to happen, the judge would appoint an overseer who would have power over Oakland Police Chief Anthony Batts. The judge is upset that the OPD has still not instituted the police misconduct reforms that it agreed to several years ago. A legal settlement is a contract – breach of which by OPD opens the city up to even more money damages.

• In light of the above, if Russo has his way, the police will undeservedly regain power, usurping federal power, creating a “fiefdom” for Russo. A failed police department does not deserve to continue down a path of destruction. That is why the federal government stepped in to begin with. If the Rider’s settlement is not given effect, the entire trial was for naught – yet another waste of taxpayer dollars.

• The named defendants in the injunction are considered guilty until proven innocent. This turns the U.S. Constitution upside down. An injunction is simply not necessary because police need only a reasonable suspicion to stop and frisk a suspect – not the higher level of probable cause. Reasonable suspicion and closer ties to the community is what is needed to bring about crime reduction and community building. An injunction is lazy police work; overkill – unnecessary and counter-effective by tearing down the very community it is supposed to clean up.

• The injunction will not result in safer streets but creates unfettered power in John Russo’s office. Further, an injunction opens the communities up to profit mongers such as real estate developers like John Russo’s family business owners. At a time when Oaklanders are losing their homes to foreclosure at record numbers, their interests rather than big business’ should be put first.

Alex Katz, Russo’s communications director, said the City Attorney’s Office will release a report on Feb. 22 that will address specific questions posed by Oakland residents at a December public safety committee meeting, including estimating the cost of implementing the injunction and the effect it is having on young people. Included in that report will be the cost for outside counsel. Katz estimates the City Attorney’s Office has spent about $70,000 already on the services of additional lawyers.

Opponents of the injunction say this report will be released too late, since a court hearing that could result in the implementation of the injunction is scheduled for Feb. 16. “We could have an injunction in place before we understand the entire ramifications and financial impact of this injunction,” said Isaac Ontiveros, communications director for Critical Resistance. It would appear that taxpayer dollars are being spent without any real opportunity to make a difference.