We still haven’t heard of who and where are those 37 Georgia prisoners who were labeled the leaders and organizers of the sit-down strike that began Dec. 9. But we do know that there are some prisoners from Smith State Prison here being harassed for participating in the protest. I haven’t been able to get to the lock-down unit where they are being held.

Reidsville, where we are, is hiding some of those brothers. This place has a history of hiding people, as they did Imam Jamil A. Al-Amin before transferring him to federal prison in Florence, Colorado.

Along with that, we have a situation here where three young brothers, including my old cellmate, are being held for murder and robbery of an older white prisoner, who occupied the bunk I slept in after I was put in the “hole.” These folks have been just holding these young brothers. They haven’t indicted neither one of them, haven’t fingerprinted either of them, aren’t giving them their proper segregation hearing — just holding them in lockup. It’s an interesting story, especially in light of everything taking place in Georgia now and with this place being a massive lockdown facility. They’ve been in the “hole” now five months. I call them the “Reidsville 3.”

Statement of support and solidarity for the Lucasville Brothers

With the name of G’d, the Beneficent, the Merciful, on behalf of the prisoners here in the state of Georgia struggling and striving for human and civil rights, we lend our spirits, hearts and minds to you all, and we send our support and solidarity equally.

Your struggle is our struggle, your fight is our fight, your plight is our plight. We are with you, against any and all that oppose you, come what may — hell or highwater!

I have a lot of articles and emails on the strike in Georgia. Wow! It was a complete display of solidarity that unsettled the prisoncrats and has created much discussion among the convicts.

I was born and raised in Georgia, did five years in prison there, have some family and comrades currently doing time there, so I know first hand how foul these hillbillies can be.

One of my relatives is Troy Anthony Davis [on death row in Georgia – see TroyAnthonyDavis.org]. His is my paternal first cousin.

Hasan, who wrote this in a postcard to the Bay View, is one of the Lucasville prisoners in Ohio who went on hunger strike beginning Jan. 3. Send him some love and light: Siddique Abdullah Hasan, R 130-559, P.O. Box 1436, Youngstown OH 44501.

When it comes to solitary confinement, U.S. fails the mice standard 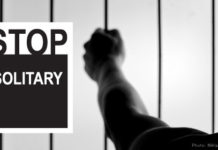 Wanda Sabir and the Bay View save lives

The Bay View has been my strength