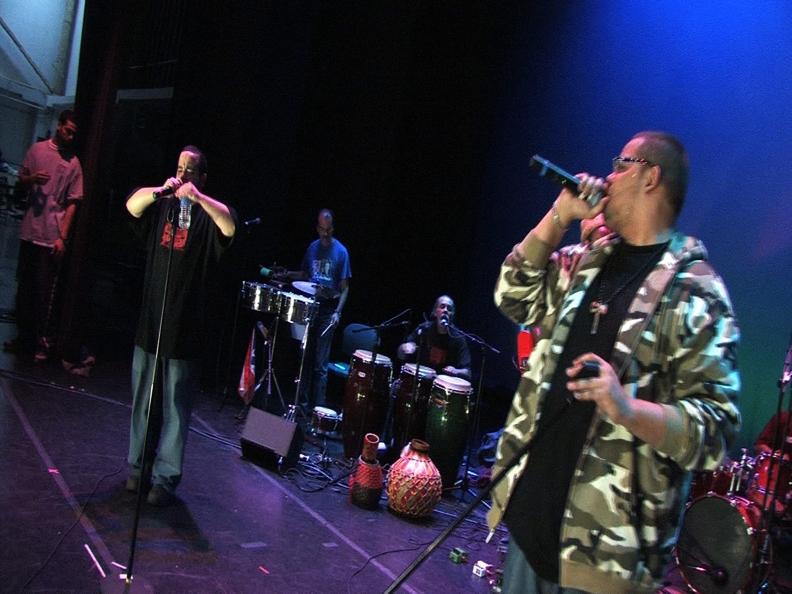 One of the dopest independent groups on the East Coast hands down is the musical formation known as the Welfare Poets. I met these brothas in NYC a while ago, but we really got closer when they came to Cali and performed in Oakland at an event we helped to organize. Last year, 2010, marked the 20th anniversary of the founding of the group.

I was in New York a few weeks ago kicking it with the brothas at Rayzer’s crib, and I realized that many people that I know in the hood and in the movement unfortunately don’t know who these talented musicians and vocalist are. So I figured that I needed to get on my j-o-b. Even if you are 20 years late, we are still going to bring you up to speed with these legendary freedom fighting cultural workers. Check out this Q&A with one of the founding members, Rayzer, of the Welfare Poets, then look them up on YouTube to see some of their videos.

M.O.I. JR: Can you tell us about your 20th anniversary as the Welfare Poets? What did y’all do to celebrate?

Rayzer: In 2000, we put out our first album, covering 10 years of our work since 1990, so yeah, 2010-11 marks the 20th year of our existence. To celebrate this we are working hard to put out our next project, the 20th anniversary album some time by the end of this year. We have also been doing a bit of touring to help expand the reach of our recently released “Warn Them” project.

M.O.I. JR: When, where and how did the Welfare Poets come together? Why do you think it was there that the group came together?

Rayzer: Twenty years ago, the group was started up at Cornell University – to many, a rather uppity sounding place to start such a group like ours. But not many people know of the history of student uprisings and takeovers at Cornell University by students from the African diaspora and other parts of Latin America. So in 1990 our journey began where we started to put political rhymes over Afro-Caribbean rhythms, much in the spirit of the Last Poets, with an obvious connection to Hip Hop.

M.O.I. JR: Who did the Welfare Poets consist of then and who does the group consist of now? How many members do you think y’all have had over the years?

Rayzer: Back then it was just myself and Hec-1, yet Djibril, who was our bassist on our first two albums, “Project Blues” and “Rhymes for Treason” was also at Cornell and playing with us here and there. Although we officially began calling ourselves “The Welfare Poets” around 1993, we date back to 1990 as to when we first started as a group.

By the time we finished school and got back to NY, we hooked up with Daju Ala, master poet and trumpet player, as well as Mike Angel, a Panamanian dread who played the guitar. We went into the studio towards the end of 1998 to release “Project Blues” in 2000.

Over the years we have had at least 20 members, all members being a part of this collective for life. Sometimes due to various commitments that come up, one band member might have to leave NY for some reason or another, and this pulls them in other directions. This we understand. Many who have left the group in the past have come back to rejoin the group, and that has been cool for us.

So there is a huge Welfare Poets family. Nowadays we are led by the youth – we are getting younger – in particular with the Legendary MIC, a lead emcee and beat producer. Additionally, this past year has seen our group grow with the addition of some powerful Sisters who sing and dance. This has been a huge and necessary addition to the group, so the new and improved group is something to see.

M.O.I. JR: What is the trick to keeping a band together for 20 years? 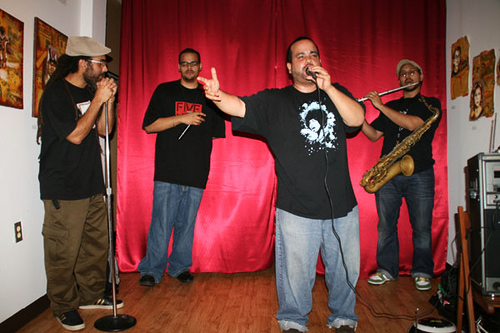 Rayzer: Our consistent politics has kept us focused and together. Also the idea that the Welfare Poets is something bigger than each of us has allowed us to remain around and pertinent. Additionally, whether you hear a song featuring the band or hear one with a beat from the Legendary MIC, you will know it is a Welfare Poet track because both the lyrics and music will be soulful and revealing regarding the plight of our people. So in essence, we have kept the band together because the work we do is necessary.

M.O.I. JR: What does it feel like to see people like Dead Prez and Immortal Technique open up for you and now they are rap legends in their own right?

Then a few months later we performed at the World Youth Festival in Caracas, Venezuela at the 1st International Hip Hop conference. That was wild to be there, with a lot of other Hip Hop artists from around the world and literally hundreds of thousands of students form around the world, but to be there and be representing real Hip Hop from the U.S. with Dead Prez and Immortal was a tremendous honor. Could not tell you what an honor it was for us.

For us it is beautiful thing when real Hip Hop reaches the masses. Brothers like Dead Prez and Immortal Technique have real Hip Hop to give and we support that wholeheartedly. It is a necessity for them to be all over the planet so this perspective of Hip Hop for liberation can be heard and fully embraced. We will do our part to continue to put out real music to reach the people the best way we can, keeping it always critical in our attempt to keep the people moving towards freedom.

M.O.I. JR: What has your biggest accomplishments been as a group?

Rayzer: As an independent group without any corporate backing whatsoever, we have managed to continue to push on. In the face of no funds, not many limelight openings, our only real motivator has been our convictions that we come from a people who are still enslaved and must be free.

“We come from a people who are still enslaved and must be free.” – Rayzer, founding member of the Welfare Poets

M.O.I. JR: What did it feel like being in Venezuela and making music with the revolutionary President Chavez?

Rayzer: Wow, I spoke to that a bit being there with Dead Prez and Immortal Technique, but let me add to what I have said already. To be in revolutionary Venezuela, to talk to the people, to hear President Chavez speak – that was a highlight of our years for sure. It was not until we came back to NYC and President Chavez came to the Bronx in November of 2005 that we were able to meet him personally and had him come on stage to perform a bit with us. That was wild in retrospect.

M.O.I. JR: Where is the Welfare Poets going the next 20 years?

Rayzer: We are going to continue to put out music and be relevant just like the work we have connected to around political prisoners, the death penalty, anti-gentrification, community education and other areas. We will continue to use culture as a tool against oppression. We will continue to organize and continue to give a voice to the concerns of us as a people. Call us people of color, Black and Brown, African diasporic, whatever; however, it is us we are concerned with.

M.O.I. JR: What is your advice to the conscious minded people who play instruments and are hesitating about putting their freedom songs out there?

Rayzer: We all have our part to play. If yours is with your voice or an instrument, then it is your duty to inspire the rest of us to freedom with your talent.

“It is your duty to inspire the rest of us to freedom with your talent.” – Rayzer

M.O.I. JR: How can people keep up with the Welfare Poets?