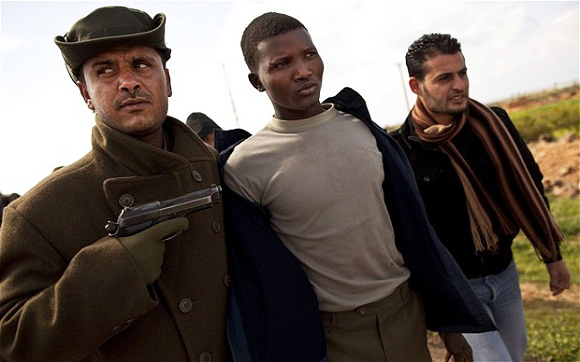 Dutch Foreign Affairs Minister Uri Rosenthal reacted to the Libyan crisis with two goals: “Let’s get Dutch citizens out of Libya safely and make sure no more immigrants reach Europe.”

Meanwhile, the Italian government’s reaction focused on the “threat of massive immigration from Libya.”

The U.N. recently published a report on racism in Libya against the 2 million Sub-Saharan migrant workers.

In that context, we read about the fate of thousands of stranded African refugees inside Libya. Adding to their hopeless situation is Gaddafi’s use of African mercenaries. The mercenary story has of course been widely published and will soon be circulating at high speed throughout the African blogosphere. Ethiopian, Eritrean and Somali bloggers have already geared up in a desperate cry for help.

Yusuf Dirir Ali, a Somali blogger writes, “Many angry mobs are targeting Black Africans after reports that the government was using ‘African mercenaries’ to repress the revolt was transmitted by Western media.” Another Somali blogger, Somali for Jesus, repeated this cry for help.

Many angry mobs are targeting Black Africans after reports that the government was using ‘African mercenaries’ to repress the revolt was transmitted by Western media.

Europeans will try very hard to keep this story out of the news. They want us to see instead pictures of “our” pilots flying European and American citizens to Crete or Cyprus. Somalilandpress reported the lynching of four Somali immigrants in Libya. In all likelihood, these lynching were a response to the stories of mercenaries killing Libyans in the street of Tripoli.

Europe has a heavy responsibility for the wellbeing of refugees in Libya. I say this for obvious reasons. European governments, like the Netherlands, helped Libya to create a buffer against Southern African immigration to Europe. Who does not remember Gaddafi’s recent visit to Italy? It seemed funny to see one of the most xenophobic presidents in Europe receive Gaddafi but, in reality, the visit was in line with European policy to use Libya as a buffer zone to counter immigration.

UNHCR, the U.N. refugee agency, issued this statement: “UNHCR fears for the safety of refugees caught in Libya’s violence.”

I encourage my fellow bloggers and all my readers to start blogging this story, just like migrants at sea, as well as mutually sharing the story through social media.

“African refugees from Somalia, Ethiopia and Eritrea have told us that just being a Black face in Libya is very dangerous at the moment,” UNHCR spokeswoman Sybella Wilkes told Reuters.

H. Vincent Harris, based in The Netherlands, is a writer and new media consultant, Colored Opinions blogger and host of Colored Opinions Blog Talk Radio, a talk show about the Great Lakes Region of Africa, emphasizing Rwanda, Congo and Burundi.

KPFA Weekend News Anchor David Landau: Black sub-Saharan Africans in Libya are in peril consequent to both racism and Western media reports that Muammar Gaddafi is using “African mercenaries,” meaning Black Africans, to put down the Libyan uprising. Pleas for help have gone up on blogs in North Africa, and both NGOs and multilateral organizations are seeking access, resources and the relaxation of immigration restrictions so as to evacuate those endangered. KPFA’s Ann Garrison has more.

KPFA/Ann Garrison: Al Jazeera English recorded the voice of this Nigerian, who goes by the name of Courage, after he escaped an attack in Libya this week:

Courage: When I was coming from my work, I looked on my back. There were car after me, chasing me. They said I should stop. I can’t stop because they were holding cutlass and dangerous weapons with them. I was running for my life. If they had caught me, that would have been the end of my life.

KPFA: Vincent Harris, creator of the Netherlands-based blog Colored Opinions spoke with KPFA about what he calls xenophobic, anti-immigrant politics in Europe. He says European governments have a history of collaboration with Gaddafi to maintain a buffer zone meant to restrict African immigration to Europe by boat from the Libyan coast. Harris said that constraining African immigration is a high priority of most European governments and that, in exchange for his help with this goal, Gaddafi received military training for his army and acceptance in European capitals:

Vincent Harris: They needed Gaddafi to solve this perceived problem, that Africans were crossing into Europe from Libya. They worked together to make sure that no Africans go into Europe.

Harris added that North Africans are nevertheless likely to meet more xenophobia than sub-Saharan Africans in Europe because Europeans perceive North Africans as Muslims and Black Africans as Christians. He also reported that on March 3, the European Council on Refugees and Exiles urged the European Commission to appeal to EU member nations to help evacuate and offer protection to 4,000 sub-Saharan refugees who are currently trapped in Libya. Harris’s report, “Africans trapped in Libya,” can be found above and on afrobeatradio.net.