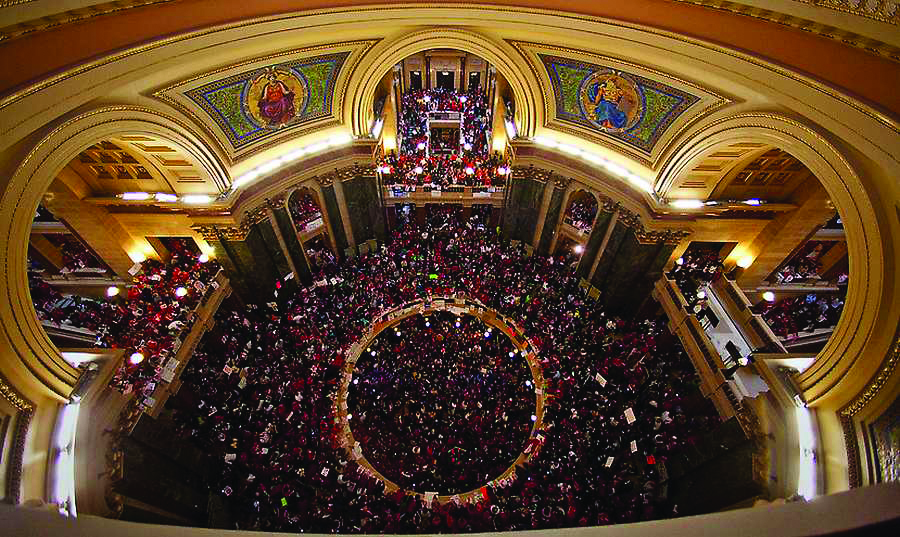 “Currently, 16 states are ‘now weighing, or expected to weigh, laws to trim unions’ powers or benefits,’ including New Jersey, Michigan, Tennessee, Idaho, Indiana and Florida. This tidal wave of contempt that Republican controlled states hold against unions marks more than a blind power grab and more than ‘a violent break with a bipartisan consensus about government workers that has operated unquestioned for four decades.’ Should it succeed, this Republican onslaught on unions will eradicate the existence of ‘the few influential players in our political system representing the interests of middle- and working-class Americans.’” – “The Truth Behind the Anti-Union Assault: The Progress report,” Feb. 22, 2011

The corporatist media is shilling the lie that the battle in Wisconsin between the governor and the unions is about cutting deficits, saving money and fiscal sanity. In reality it is more about gutting unions and undermining the rights of workers than fiscal solvency.

There is a class war raging in AmeriKKKa, and the goal of the uber-rich and their flunkies in government is to accomplish in the U.S. what their totalitarian idols did in Germany and Russia: shut down or co-opt the union movement. This is part of their overarching plan to gut the middle class and usher in a neo-feudal, neo-fascist police state in this country.

This may sound far fetched but it’s true. The situation in Wisconsin could very well prove to be the litmus test for their plan. The Wisconsin governor is using the same strategy GOP presidents Ronald Reagan and George W. Bush used to kill unions and wreck the economy in the guise of cutting costs.

Remember what Reagan did to the Air Traffic Controllers Union? Remember what George W. Bush did to create the current fiscal crises – the massive tax cuts for the super-rich that reduced revenue, allowing Wall Street Ponzi schemes to run amuck and then waging two imperialist wars?

The corporatist media is shilling the lie that the battle in Wisconsin between the governor and the unions is about cutting deficits, saving money and fiscal sanity. In reality it is more about gutting unions and undermining the rights of workers than fiscal solvency.

After only two weeks in office, Scott Walker of Wisconsin gave his rich supporters tax breaks that severely reduced state revenue flow, then blamed the shortfall on the union contracts and collective bargaining. With a Republican majority behind him, he moved to eliminate collective bargaining, claiming he had to do so to cut the deficits his tax breaks to his friends caused!

“There is a kernel of truth in Wisconsin Gov. Scott Walker’s claim of a ‘budget shortfall’ of $137 million,” writes Stanley Kutler in “What Gov. Walker Won’t Tell You” in Truthdig. “But Walker, a Republican, failed to tell the state that less than two weeks into his term as governor, he, with his swollen Republican majorities in the Wisconsin Legislature, pushed through $117 million in tax breaks for business allies of the GOP. There is your crisis.

“The state Legislature’s Legislative Fiscal Bureau – Wisconsin’s equivalent of the Congressional Budget Office and a refuge for professional expertise and nonpartisanship – warned Walker and the Legislature that the measure would create a budget gap. There is your shortfall – and not one resulting from established public employee benefits. Before the tax giveaways, the fiscal agency predicted a surplus for the state.

“Now the governor has offered a proposal simple and clear in its intent, and patently dishonest. Walker wants state workers to contribute to their pension fund and is calling for an increase in their payments for medical insurance. Make no mistake: The governor’s ‘budget repair bill’ has little to do with a budget shortfall and everything to do with breaking unions, starting with public employees and then perhaps moving on to others as well,” declares Kutler.

Walker, a Republican, failed to tell the state that less than two weeks into his term as governor, he, with his swollen Republican majorities in the Wisconsin Legislature, pushed through $117 million in tax breaks for business allies of the GOP. There is your crisis.

The oligopoly media is not going to tell us the truth about what’s going on or the real causes of the fiscal crisis in this country, because the mainstream media represents the perspective and interests of the “ballers and shot callers” who own and run this country. Wisconsin is merely one of several states in fiscal peril that are using the unions as scapegoats and whipping dogs to alter the landscape by neutering unions and the rights of workers.

Art Levine of the Washington Monthly writes in “Will the New Assaults on Public Employee Unions Undermine All Workers?” in In These Times: “Years of demonizing public employee unions as part of a right-wing assault against the labor movement now seems about to pay off. That’s due in part to state budgets that have been driven near bankruptcy largely by the Wall Street-led crash and the political cover provided by otherwise liberal Democrats such as New York Gov. Andrew Cuomo. He is seeking a reasonable-sounding one-year pay freeze that adds a bipartisan patina to the growing union-bashing.”

“’For example, Republican lawmakers in Indiana, Maine, Missouri and seven other states plan to introduce legislation that would bar private sector unions from forcing workers they represent to pay dues or fees, reducing the flow of funds into union treasuries. In Ohio, the new Republican governor, following the precedent of many other states, wants to ban strikes by public school teachers.

“’Some new governors, most notably Scott Walker of Wisconsin, are even threatening to take away government workers’ right to form unions and bargain contracts. …

“’Union leaders particularly dread the spread of right-to-work laws, which prevail in 22 states, almost all in the South or West. Under such laws, unions and employers cannot require workers to join a union or pay any dues or fees to unions to represent them.’”

Once the corporations and politicians castrate U.S. unions, the owner and business classes will have free rein to dictate wages, cut benefits and bring back 19th century type labor conditions with no one or any organized groups to oppose them. Keep in mind the Republicans aren’t in this by themselves. This is a bipartisan effort. The Democrats have colluded with Republicans to wage class war for over 30 years; they’re just not as conspicuous.

“For organized labor in the USA, the path away from oblivion must begin with the recognition of the vastly different situation that the working class faces in the early 21st century from what existed even twenty years ago,” write Kate Bronfenbrenner, Donna Dewitt and Bill Fletcher in “The future of organized labor in the U.S.: Reinventing trade unionism for the 21st century.” “Time and space do not permit an exhaustive examination of all of these changes. Much has been written about it in various journals and books. Suffice to say that the growth of neo-liberal globalization has represented a dramatic change in the approach of capitalism toward both the working class as well as towards society as a whole. Multi-national corporations and their allies have concluded that the terms of any ‘social partnership’ must be altered in their fundamentals at the expense of working people. This view – neo-liberalism – has grown in importance, coming to dominate the thinking of both major U.S. political parties and has guided the shift to the political Right in the ruling circles of the USA.”

I have never been that fond of unions due to their long history of white-only membership and exclusionary practices, but if the fascists succeed in killing unions, it will not bode well for the rest of us. Organized labor, both public and private unions in this country, have their backs to the wall and things look extremely bleak. Keep your eyes on the situations in Wisconsin, Ohio, New Jersey and around the nation because what happens there could well be harbingers of things to come.

Junious Ricardo Stanton is a freelance writer and internet radio host on www.harambeeradio.com and can be reached at jrswriter@comcast.net. To read his commentaries regularly, subscribe to the Sons of Afrika listserve at http://groups.yahoo.com/group/SOA/. This commentary previously appeared on WACPtv.

Earthquake in Haiti: Under Aristide, Haitians were prepared for disaster