by Donaji Lona and Jaron Browne of POWER

San Francisco – Banners reading “Get Your Free Fast Pass” will cover the BART station at 16th and Mission Street Thursday, March 10, from 3 to 5 p.m. for the first in a series of community bus pass clinics planned in the coming weeks. Dozens of bus riders with the MORE Public Transit Coalition are setting up community clinics in the Mission, Bayview and Chinatown for low-income families to fill out the applications for the free Muni youth passes. 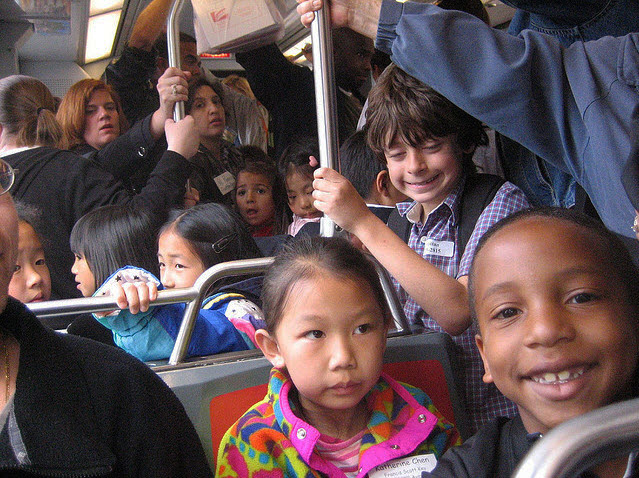 Last week, at the urging of the MORE Public Transit Now Coalition and Supervisor David Campos, the Municipal Transportation Agency (MTA) board approved the implementation of the Youth Lifeline Program. This program will provide 12,000 low-income youth with free Muni bus passes for the months of April, May and June.

In order to access the free bus pass program, low-income families must fill out an application and return it to the MTA office. Community organizers are setting up the bus pass clinics to inform low-income parents and students about the program and to help families fill out the applications. Community organizations and members who fought for this victory want to make sure the community knows they have access to the free passes.

“We fought hard to get these free bus passes,” said Gloria Esteva of POWER. “Now we want to make sure that children get these passes in their hands and don’t have to worry about having bus fare in order to make it school each day.”

In San Francisco, there are more than 20,000 students who rely on public transit to travel to and from school daily. However, public transit fare has become too expensive for many low-income youth and their families. Over the past year, the cost of the Youth Fast Pass has risen 100 percent from $10 to $20.

“We take the bus everywhere we go,” said Un Un Che from the Chinese Progressive Association. “My family depends on Muni to get to school, to work, to the doctor. Buses are not a luxury; they are a necessity.”

During the community bus pass clinics, the MORE Public Transit Coalition will set up tables and assist families and students to fill out the applications for the Lifeline youth passes. The coalition will use music and community education to draw attention from families in the most transit-dependent neighborhoods in the city.

The first clinic is planned for Thursday, March 10, at 16th and Mission Street. A second clinic is planned for Monday, March 14, in the Bayview district at Mendell Plaza at the corner of Third Street and Palou, followed by two more, in the Mission on Thursday, March 17, and Monday, March 21, in the Bayview. Future clinics are planned to happen in Chinatown as well. Applications are available in English, Spanish and Chinese, and assistance will provided in all three languages.

While the new Lifeline program is generating a lot of excitement among families, organizers say that the 12,000 passes will still fall short of meeting the need for affordable public transportation in San Francisco.

“We know that next year the city plans to continue to cut yellow school buses,” said POWER organizer Beatriz Herrera. “We need a permanent program that will ensure that our children can travel safely around the city, get to school each day and meet their basic transit needs.”