by Earthworks and the Powder River Basin Resource Council

Washington – With growing national alarm over the health and environmental threat of toxic chemicals in natural gas drilling, five members of Congress are reintroducing bills to repeal the exemption of hydraulic fracturing, or “fracking,” from the Safe Drinking Water Act and require public disclosure of chemicals used in the controversial process. 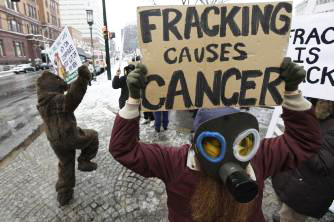 Sens. Bob Casey, D-Penn., and Charles Schumer, D-N.Y., and Reps. Diana DeGette, D-Colo., Jared Polis, D-Colo., and Maurice Hinchey, D-N.Y., introduced companion House and Senate versions of the Fracturing Responsibility and Chemical Awareness (FRAC) Act on March 15. The act would close the loophole that allows gas drillers – like no other industry – to inject known hazardous chemicals into underground drinking water supplies and would also force the industry to tell regulators and the public what chemicals they are using.

“Energy development doesn’t have to threaten our drinking water and our communities’ health,” said John Fenton, a rancher from Pavillion, Wyo., where the U.S. EPA has warned some residents to stop drinking water from wells contaminated with arsenic and other chemicals associated with drilling and fracking. “We just want the oil and gas industry to follow the rules like everyone else,” said Fenton, a board member of the Powder River Basin Resource Council.

The five members of Congress first introduced the FRAC Act in 2009 in response to citizens’ concerns about the drilling and fracking boom in their home states. Since then, the practice of fracking has expanded to 34 states, with contaminated water and air pollution accompanying it.

The Academy Award-nominated documentary, “Gasland,” has shown shocking evidence of fracking’s dangers. Earlier in March, a New York Times investigation documented the threat of radioactive wastewater from fracking operations and the inadequacy of current regulations on both the state and federal level to protect water resources, air quality and communities.

Fracking injects fluids laced with toxic chemicals under high pressure into a wellhead to crack open underground gas formations. But the toxic fluids can migrate from the gas deposit to nearby water sources and must also be disposed of after they flow back to the surface. Regulators and citizens find it almost impossible to tie water contamination or health effects to a specific well because the chemicals used in fracking are closely held trade secrets.

“How can we allow drillers to use hundreds of thousands of gallons of fluids with cancer-causing chemicals near our homes and schools without even telling us what they’re using?” asked Gwen Lachelt, director for EARTHWORKS Oil and Gas Accountability Project, which is working nationwide in communities impacted by drilling. “The public deserves to know what chemicals are used so they can protect their families and industry can be held accountable when problems occur. Without the FRAC Act, drillers will continue to get a free ride.”

Why immigration reform is important