Banishment and democracy are incompatible

An open letter from Haiti 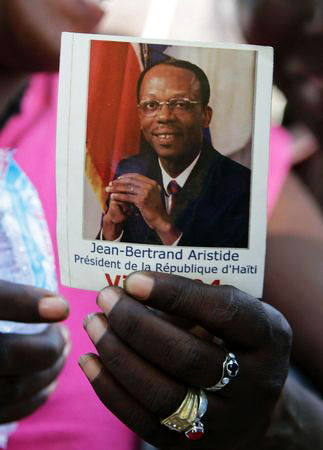 We, grassroots organizations located in the south of Haiti, congratulate the religious, solidarity and community organizations and leaders who signed the letter published in the Jan. 23, 2011, Miami Herald calling for the return of President Aristide. We thank the anti-apartheid activists who signed a letter sent to South African President Zuma. We add our voices to theirs.

Many thanks to the religious leaders who sent a beautiful letter to our brother President Aristide; we join our voices to theirs in prayer, so that President Aristide can join us this week, as announced in the press by the South African government. We invite all those who signed – as well as those who did not have the opportunity to sign these letters but are motivated by the same sentiments – to join their voices to those of the majority of Haitians to make President Titid come back to us healthy and able this week as expected by us.

We call on all people and leaders the world over who believe in democracy to help President Aristide return promptly this week. Banishment and democracy don’t mix. Forced exile and democracy are also incompatible.

We call on all people who believe in democracy to help President Aristide return promptly – to make President Titid come back to us healthy and able this week as expected by us.

A special thank you to President Jacob Zuma and the South African brothers and sisters who we know have endured similar hardships and know and understand our pain. As they celebrated the end of apartheid with the liberation of Nelson Mandela and the return of the jailed and exiled ANC leadership, the Haitian people are ready to celebrate the end of President Aristide’s exile.

Signed by the following organizations:

The open letter in the original Haitian Kreyol:

This open letter was forwarded by the Haiti Action Committee. Learn more and get involved at www.haitisolidarity.net and on Facebook.

Former Haitian President Jean-Bertrand Aristide has decided to return to Haiti this week ahead of Sunday’s presidential runoff election. Aristide has lived in exile in South Africa since 2004, when he was ousted in a U.S.-backed coup. Despite U.S. pressure on the governments of Haiti and South Africa not to allow him to return, Aristide and his family are planning to leave on Thursday.

Amy Goodman is in South Africa to cover Aristide’s return trip to Haiti. She joins us from Johannesburg along with K.K. Kean, an award-winning filmmaker.

As President Aristide and his family prepare to return to Haiti, the U.S. State Department has once again released a statement aimed at blocking the return of the former Haitian president to his homeland. It is clear that the United States is exerting enormous pressure on the government of South Africa:

Yes to Aristide’s return, No to fraudulent elections

It is crucial to keep up the pressure and support the demands we hear consistently from the grassroots in Haiti!

– Former President Jean-Bertrand Aristide must be allowed to return to Haiti immediately.

– The fraudulent November 2010 election must be annulled and new elections that are free, fair and inclusive of all parties, including Haiti’s largest party, Fanmi Lavalas, must be scheduled.