An open letter to KPFA listeners by Chandra Hauptmann

I am writing to give clarity and to correct the misinformation that you have been hearing for the past three months on KPFA up to and during the current fund drive from some of KPFA’s paid staff, including Aileen Alfandary, Mark Mericle, Mitch Jeserich and Brian Edwards Tiekert. This includes the heralding of Brian’s “triumphant return to KPFA” on Monday, Feb. 28, after being “laid off” for the past three months due to the financial crisis at KFPA and Pacifica. In truth, Brian never left!

Those of you who listen to KPFA regularly have continued to hear Brian on the air during the past three months, reporting on the KPFA News and sitting in for various KPFA hosts, including CS Soong and Mitch Jeserich.

The truth of the matter is that Brian did not have to be “laid off” three months ago. He could have used his CWA (Communications Workers of America) union contractual “bumping rights” to replace John Hamilton as soon as he was notified that he was being “laid off,” because John had less seniority on staff at KPFA than Brian.

Brian chose to “leave” KPFA three months ago, because he was hoping that the subsequent on-air and email campaign mounted by the above-referenced paid KPFA staff and their allies, a faction that called itself “Concerned Listeners” until changing its name last year to “Save KPFA,” would pressure Pacifica management into reinstating the former Morning Show with him and Aimee Allison as co-hosts. I sincerely believe that Brian was one of, if not THE key orchestrator of this campaign.

When Brian and his allies finally realized that Pacifica’s management was not going to capitulate to this on-air and email campaign, they created the ruse of Brian’s “return” to KPFA, on Monday, Feb. 28, and the subsequent “layoff” of John Hamilton. None of the above named people who “reported” on these events on KPFA linked the two of them together, nor mentioned that John Hamilton was laid off because Brian finally decided to use his CWA union contractual bumping rights due to having more KPFA staff seniority than John. 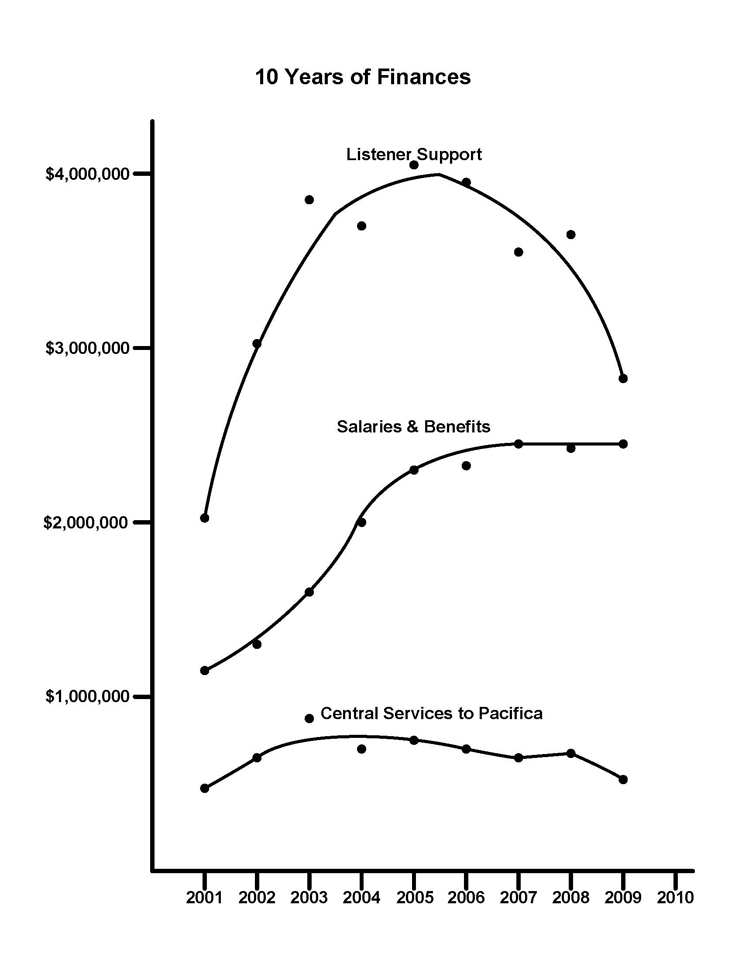 Below are excerpts from two statements written by George Reiter and Arlene Engelhardt that give clarity to KPFA and Pacifica’s dire financial situation, resulting in the layoffs of paid KPFA staff members Brian and Aimee:

In November 2010, former Pacifica National Board Chair George Reiter stated: “What is at stake is the financial viability of the Pacifica Foundation and its ability to manage the stations in the network. That viability depends on the ability of each of the stations to raise sufficient money to meet payroll and expenses. That hasn’t been happening at KPFA for at least two years.”

In December 2010, Pacifica Executive Director Arlene Engelhardt stated: “Over the past five years, KPFA has suffered a 27 percent drop in annual income — including a 30 percent decline of more than a $1.2 million in annual listener support. Since 2007, KPFA has lost almost $1.5 million overall.”

You can read their complete statements, as well as other factual information about KPFA and Pacifica, by going to http://supportkpfa.wordpress.com/.

I believe that the negative on air and email campaign conducted by the “Concerned Listener/SaveKPFA” folks has been extremely destructive and detrimental to the future survival of KPFA and the entire Pacifica Network! In reality KPFA is NOT in the black, as several “Concerned Listener/SaveKPFA” folks want you to believe, but is deeply in the hole with carry-over debts from last year. It will take up to two years to catch up, and unless there are several good fund drives this year, even more layoffs of paid staff may be required in the near future.

Chandra Hauptmann, who can be reached at chcats@lmi.net, writes this afterword: “This statement was written solely by Chandra Hauptman, former KPFA Local Station Board member and longtime KPFA community activist.”

Why not celebrate Nadra Foster and the Black community on KPFA?