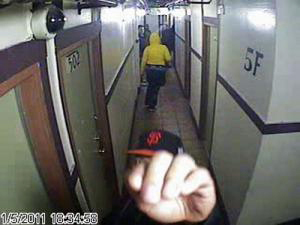 According to the Public Defender’s Office, the damning video footage from two separate drug arrests made at the Henry Hotel, a 132-unit, seven-story low-income and homeless resource residential hotel built in 1912, stand in direct contradiction to police reports that were signed by officers under penalty of perjury.

The operations of the narcotics unit accused of using illegal tactics against those being targeted for alleged drug violations have been suspended, prompting an FBI investigation into the activities of the eight-officer undercover plainclothes unit. Presently, a total of six cops are accused of illegal searches and perjury.

Additionally, a third video appears to show the cops forcing someone’s door open on New Year’s Eve at the 69-unit low-income Hotel Royon, managed by the Tenderloin Housing Clinic, revealing that the cops did not even bother to show their badges. The charges filed against the arrested person have since been dropped.

According to Tamara Aparton, spokeswoman for the Public Defender’s Office, there existed a bench warrant for allegedly possessing crack cocaine for the man who was arrested at the Hotel Royon, but there is no record of police checking for the warrant until after he was arrested. It appeared to be an illegal search. 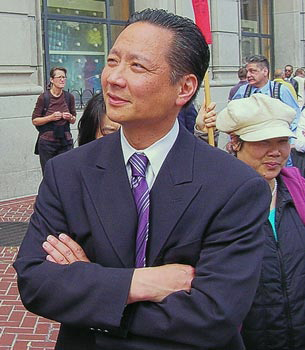 Charges for the Dec. 23 incident were dropped by prosecutors last week, and a judge dismissed the Jan. 5 case last Monday, after seeing the video footage.

In a press statement, Chief Attorney Matt Gonzales of the San Francisco Public Defender’s Office said the seriousness of the matter could not be overstated. “A free society cannot abide a culture of lawlessness by police,” Gonzales said. “Those officers who lie under oath to magistrates should be prosecuted for their misconduct. They are no better than the criminals they purport to be in pursuit of.”

Bob Dunlap of the Public Defender’s Office added that the videos confirm longstanding suspicions. “For years, our clients have reported tales of police entering their homes without warrants or consent, in direct contravention of the Fourth Amendment and in direct contradiction of the police version of events, and now we have proof both of the police violating core constitutional rights and committing perjury to cover their tracks.”

San Francisco Police officers Raymond Kane, Raul Elias, Arthur Madrid and Robert Forneris search a room of the Hotel Royan. The police officers are under investigation, and the case was dropped.

In this surveillance video, Officers Razzak, Yick, Madrid and Forneris are seen using a master key to barge directly into a room without knocking or obtaining consent. Charges against the man they arrested were dropped by prosecutors.

In this Jan. 5 video, Officer Richard Yick is seen covering the surveillance camera with his hand while his fellow officers — Razzak, Kane and Elias — approach the room. The officers then demand the female resident open her door. All four officers then storm into the unit. A judge dismissed the case after viewing the video.

In both instances, members of the SFPD Narcotics Unit acting on a tip from a confidential informant responded to the Henry Hotel. In the Dec. 23 incident, Officer Arshad Razzak states in a police report that officers knocked on the resident’s door, announced themselves and waited for a response. Hearing none, he wrote, officers slightly opened the door with a master key. 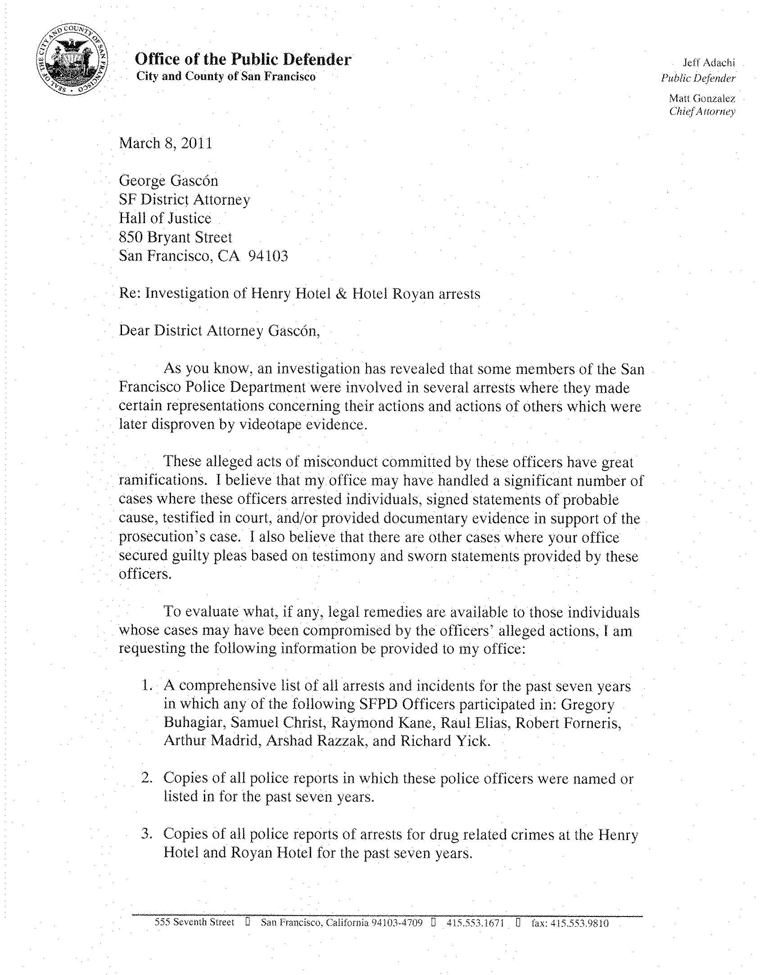 Without entering the unit, officers then told the female resident they were freezing the room until they could obtain a search warrant, Razzak wrote. The woman then gave them verbal permission to search the premises while officers contacted headquarters and asked a unit to respond with a consent form she could read, according to the police report. A man inside the woman’s room was arrested after officers claimed to find heroin and crack on his person.

The surveillance video, however, tells a different story. In it, four narcotics officers – Razzak, Yick, Madrid and Forneris – are seen using a master key to barge directly into the room without knocking or obtaining consent.

Charges against the man were dropped by prosecutors this week after the surveillance footage was obtained by the Public Defender’s Office. The man was represented by Deputy Public Defender Anne Irwin.

In the Jan. 5 case, Officer Richard Yick states in a police report that officers were met in the hallway by a woman who voluntarily opened the door to her room. A man who came to the door told officers he was on probation, which police then confirmed with dispatch, Yick wrote, before entering and searching the room. After heroin was found, both the man and woman were arrested. 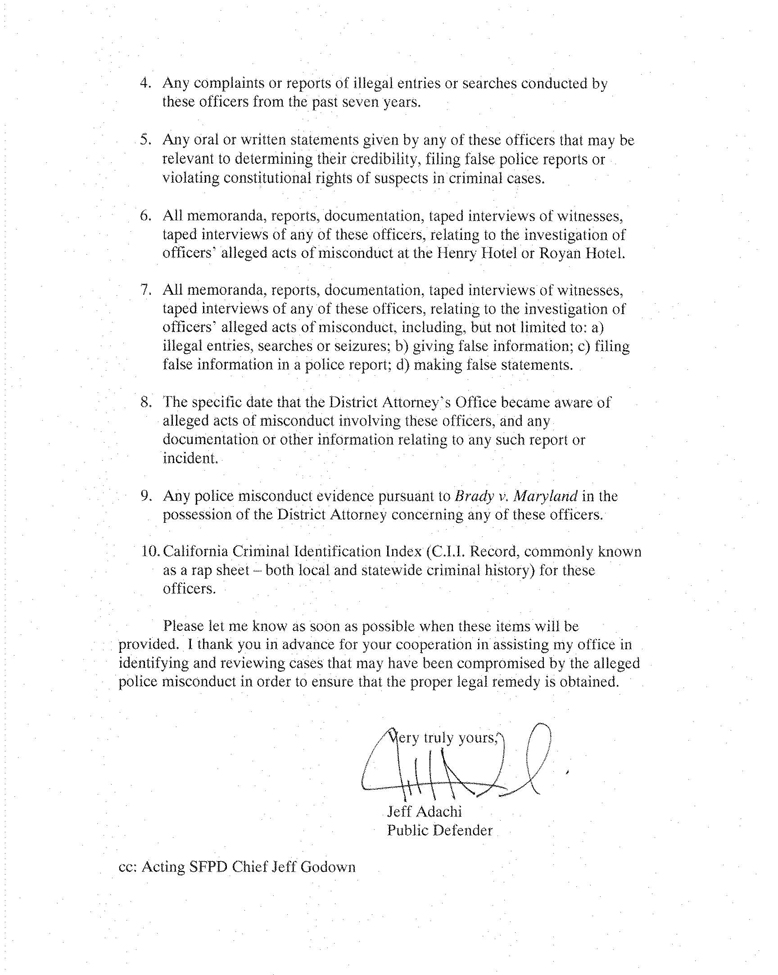 In the video, however, Yick is seen covering the surveillance camera with his hand while his fellow officers – Razzak, Kane and Elias – approach the room. The officers then demand the female resident open her door. All four officers then storm into the unit.

Newly-released surveillance footage from the Henry Hotel reveals a man was falsely arrested for drug possession by officers currently under federal investigation for perjury and conducting illegal searches.

The footage of the Dec. 2, 2010, arrest was released March 7 by private defense attorney Scott Sugarman during a press conference held at the San Francisco Public Defender’s Office. Sugarman’s case is the fourth video that has surfaced since last week that sharply contradicts police reports signed by officers under penalty of perjury. It is the third case involving the Henry Hotel in SOMA (South of Market neighborhood). The four other incidents in the widening scandal involve Public Defender’s Office cases.

In the video, Sugarman’s client, a 29-year-old man, is seen walking into the Henry Hotel and ascending the stairs wearing a black jacket. Moments later, police using a master key enter the sixth floor room of two women suspected of selling drugs, where the man is a visitor. Officers find a white and gold jacket slung over a chair with drugs in the pocket and no identification.

According to Razzak’s police report, Buhagiar states that he witnessed Sugarman’s client walk into the hotel wearing the same white and gold jacket.

“My client told officers repeatedly that it was not his jacket, that his jacket was right next to him,” Sugarman said. “Police never put his statements in their report, never checked the video and never booked the black jacket into evidence.”

The man, who served three weeks in jail over the incident, was freed when prosecutors dropped the case after a preliminary hearing. Sugarman provided stills from the video that show his client wearing a black jacket.

San Francisco Public Defender Jeff Adachi said the latest incident confirms a disturbing trend in which police officers do not act in pursuit of the truth.

“This was an innocent man who was framed,” Adachi said. “He committed no crime and was arrested simply because he had the misfortune of visiting the Henry Hotel.” 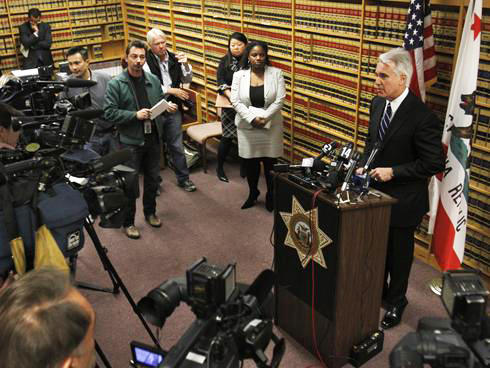 “For the security and protection of all San Franciscans, I urge you to adopt a strong policy against the use of hotel master keys, so that tenants and guests can rest secure in their homes – whether that be an expensive ocean view apartment or the hotels here, in less expensive zip codes,” Adachi wrote in a March 10 letter to District Attorney George Gascón and Acting Police Chief Jeff Godown.

McCloskey, who penned the letter on behalf of Luz Hotel owner Virgilio Candari, states that on Jan. 22, 2001, Officer Kevin Byrne visited the Geary Street property and asked for copies of tenants’ identification.

“When Mr. Candari approached the bulletin board which contained the IDs of registered guests, Officer Byrne pushed him away in a violent gesture,” McCloskey wrote. “Mr. Candari is a slender man, not in good health. He was intimidated and frightened by this physical pushing. Officer Byrne then demanded the key to Room 15 and intimidated Mr. Candari into giving him the master key to all rooms.” 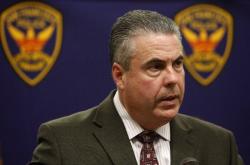 Adachi said Cardari’s account was disturbing because the officer appeared to make Candari an unwitting accomplice to privacy invasions.

“By bullying hotel owners into handing over master keys, police are exposing both the landlords and the city to federal civil rights lawsuits,” he said.

In a second letter, dated March 9, 2011, and addressed to Assistant District Attorney Jerry Coleman, former public defender and current Golden Gate University Law Professor Susan Rutberg details a disturbing 1998 case involving a Turk Street hotel. Police in that case testified they announced themselves and knocked on the door, which was then opened by Rutberg’s client.

The hotel manager, however, testified that the officers, Scott Warnke and Joseph Zamagni, obtained a master key from the front desk. A judge found the police testimony “inherently incredible” and dismissed the case.

Several days later, Rutberg’s client reported being stopped and illegally searched on the street by the same officers, who told him, “You got away with this one, but we’ll get you next time.” Rutberg subsequently filed complaints against the officers with the Office of Citizen Complaints.

Three allegations were sustained, according to Rutberg: two allegations of “Conduct Reflecting Discredit to the Department” for making false statements in the incident report and in a court proceeding and one allegation of “Unwarranted Action” for entering the residence unlawfully. 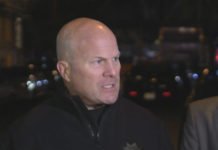