San Francisco – Longtime Bayview Hunters Point community leader Espanola Jackson can often be heard at public meetings saying, “Good faith efforts didn’t work in the 1960s and they sure don’t work now.” Ms. Jackson, who participated in the discussions that led to the landmark 1970 agreement between the Bayview Hunters Point Model Cities Neighborhood Agency, San Francisco Building Trades Council and Associated General Contractors that pledged a “good faith effort” to employ 50 percent local workers on construction in the southeast sector, has seen decades of disappointment in her community when City projects are approved on promises of “local jobs” and those opportunities are not delivered. 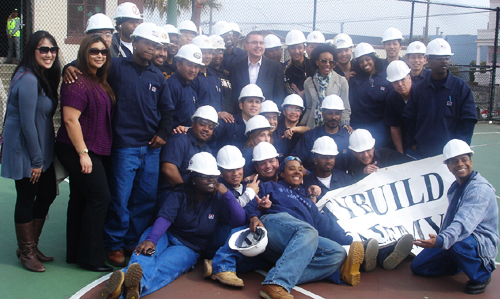 One year ago, Supervisor John Avalos began rallying community leaders, labor activists, fellow policymakers and workers in every San Francisco neighborhood to shift the City away from reliance on “good faith efforts” to a local hiring policy that seeks to match promise with reality. By creating a table of dialogue between community, labor, contractor and government stakeholders, Avalos put together one of the most collaborative pieces of legislation that San Francisco has ever seen.

San Francisco’s Local Hiring Policy for Construction became law on Christmas Day 2010, and Mayor Edwin Lee has consistently prioritized implementation of the new law by March 25 within his administration, recalling his career as a civil rights attorney that preceded his work in public service.

The City’s new local hiring law represents many things – the shift away from an efforts-based approach to an outcomes-based policy among them. But above all, local hiring is about the faces of the men and women who hope that this law will be the one that at last connects them with opportunities that are promised as the City proposes and approves new projects, helps them and their families survive and stay in San Francisco, and makes those facing the most significant barriers to employment finally believe government when it says, “Show us a willingness and desire to work and we will show you a job.” 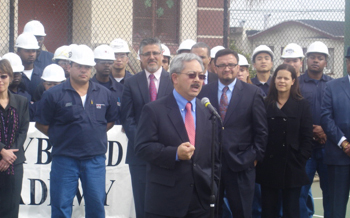 The new local hiring law is a tool to maintain and promote San Francisco’s working class by giving local workers a leg up on projects they pay for as taxpayers, particularly as the City prepares to build housing slated to be affordable for middle class homebuyers. Reciprocity agreements with other cities with local hiring laws such as Oakland and Richmond will strike a balance between the workforce needs of our regional partners and the urgent fact that San Francisco unemployment is fast approaching an all-time high with over 43,000 unemployed residents.

The San Francisco Chronicle recently profiled Michael Means, a lifelong San Franciscan and 15-year Army veteran who wants to be a plumber like his grandfather. A current member of the CityBuild Academy, Means spoke passionately and enthusiastically on behalf of the new law at a March 9 press conference in which Mayor Lee and Supervisors Avalos and David Campos were joined by City department heads to commit to delivering opportunities to Means and other training program graduates. 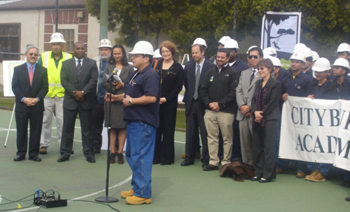 Representatives of the Laborers, Carpenters and Operating Engineers unions were on hand, along with community-based organizations that work with CityBuild to recruit potential construction apprentices and maintain relationships of support with workers as they continue in their construction career to journey-level status. The workers who stood behind City policymakers and dignitaries, their more experienced yet unemployed counterparts patiently waiting for a chance to shine again, and even those whose sense of community decline has moved them to part ways with patience – these are the faces of local hire.

There is uncertainty. While there are community contractors such as Rubecon and Kwan Wo Ironworks who consistently employ in excess of 60 percent local workers and there are large contractors such as Webcor Builders and Nibbi Brothers who have sought to develop expertise in the new law in order to hit the ground running, some companies have concerns about whether they must change their way of doing business with the City.

In time, however, contractors will understand that the new law actually makes public works construction more streamlined and efficient and that the best way to comply is to be signatory with our local trade unions. By signing up, contractors are better positioned to meet the worker standards promoted in the Avalos law and take advantage of the flexibility to tap the local talent pool of organized labor that our unions provide.

Moreover, requirements for identifying “disadvantaged workers” will be the responsibility of CityBuild and its community-based partners, not contractors and unions.

There will be challenges for some unions. San Francisco’s law has been called the strongest in the country in part because it contains local hiring requirements within each trade, not on total project hours across all trades.

Even though the first year begins with a relaxed overall requirement reflective of last year’s performance of 20 percent local workers within each trade, apprentices, who typically account for approximately one-sixth of workers on public works, must be 50 percent local from the outset of implementation.

Apprentices, who typically account for approximately one-sixth of workers on public works, must be 50 percent local from the outset of implementation.

Some unions have a wealth of local apprentices to deploy while others will likely need to recruit. Most unions contain provisions such as “name call” in their collective bargaining agreements with contractors to allow targeted dispatch based on residency, while less than a handful do not. 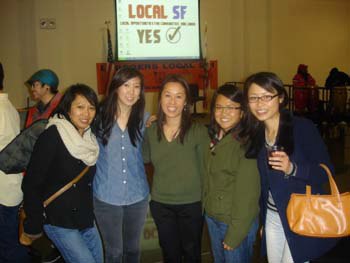 There had been whispers that one of the remaining local hiring hold-outs might find a proxy to file a lawsuit on their behalf. By week’s end, however, this fleeting dark cloud seemed to disappear upon realization that trying to stop this movement’s momentum of hope and opportunity would draw the ire of a City family united through community-labor partnership.

Indeed, the future looks promising. Last week brought news that the plumbers union recently admitted two graduates of the CityBuild program as apprentices, a gesture which highlights that the faces of local hire also include the unemployed rank and file who, regardless of residency, hope that the local hiring discussion will lead to the creation of more jobs overall through increased sustainable development in San Francisco. 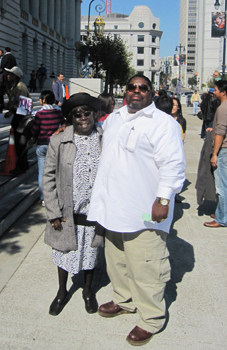 Even in non-construction, companies looking to do business with San Francisco are realizing the importance of committing in the strongest terms possible to guaranteeing jobs for some of the City’s 43,000 unemployed workers.

In addition, the San Francisco Municipal Transportation Agency has begun to push back against federal transit officials who have cautioned against implementing local hiring on federally funded projects despite the Obama administration’s April 2009 directive for federal agencies to “promote local hiring” in administering stimulus funds.

The SF Public Utilities Commission has resumed stalled discussions of a project labor agreement for the upcoming $3-$4 billion worth of work on the City’s sewer system. Such a PLA would include the new local hiring law, help guarantee high road working conditions on the project and save City ratepayers money in the long run.

The new local hiring policy will work. Supervisor Avalos and colleagues including Supervisors Ross Mirkarimi, Campos, David Chiu, Eric Mar and Jane Kim have all publicly committed to doing their part to ensure success, and former Supervisors Sophie Maxwell, who joined Avalos in calling the law a “ New Deal for San Francisco,” and Bevan Dufty, whose vote made the law veto-proof, are no doubt following the law through implementation. 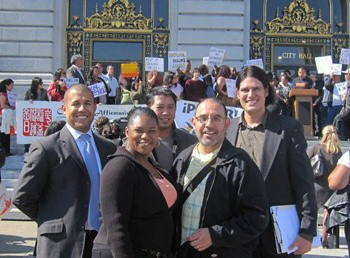 The community advocates who came together with Supervisor Avalos, the Office of Economic and Workforce Development, and the City Attorney’s office to craft and develop the new local hiring law will remain vigilant in ensuring the law’s success.

This week represents a milestone generations in the making. In a city that continues to advance projects based on promises of “local jobs,” there at last seems to be a reflection of credibility in the smiling faces of local hire. Hope is perhaps best embodied in the palpable and growing excitement among the many disillusioned in our most excluded and marginalized communities. March 25 is not a deadline – it’s a beginning.