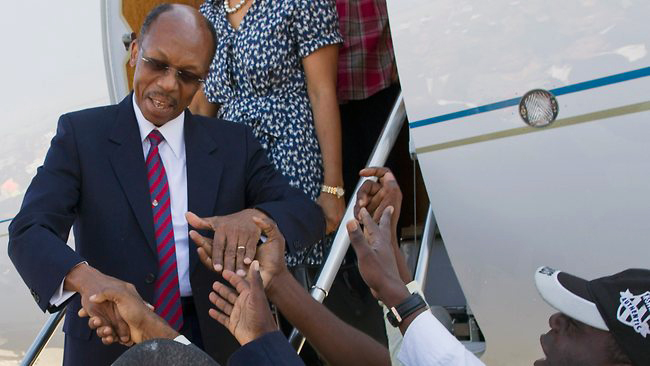 Haiti Action Committee welcomes and celebrates the return of President Jean-Bertrand Aristide to his homeland after almost seven years of forced exile in South Africa, following a coup against his government on Feb. 29, 2004, orchestrated by the United States, France, Canada and Haitian elites. “The return of Aristide is a tribute to the love the Haitian people have for the president they elected twice with overwhelming majorities, and their persistent demand for his return, in spite of adamant opposition from the coup supporters and a continuing United Nations occupation force of almost 12,000 personnel,” said committee member Ayana Labossiere.

We condemn the threatening language of the State Department and its ongoing and blatant efforts to disrupt true democracy in Haiti. On March 14, U.S. State Department spokesperson Mark Toner said: “We would urge former President Aristide to delay his return until after the electoral process has concluded, to permit the Haitian people to cast their ballots in a peaceful atmosphere. A return prior to the election may potentially be destabilizing to the political process.”

These so-called “elections” excluded the participation of Haiti’s largest party, President Aristide’s Fanmi Lavalas in the first place and have forced a fraudulent “run-off” on Sunday, March 20, with two supporters of former dictator Jean-Claude Duvalier, completely rejected by most Haitians. It is the United States that, since President Aristide was first elected in 1990, has refused to send funds directly to the Aristide government, blocked it from receiving signed international loans, economically destabilized it and orchestrated his overthrow twice in 1991 and 2004 coups. Washington has also prevented the Fanmi Lavalas Party from participating in post-2004 coup elections.

If allowed to do so in peace, the Haitian people are perfectly capable of governing themselves wisely and democratically. They love President Aristide because his governments built more schools in their few short years in power than had been built previously in Haiti’s entire history, built clinics and a medical school, built parks in neighborhoods with no open space, raised the minimum wage, and tried to get the wealthy to pay taxes, making powerful enemies in the process.

We want people to understand that the enthusiasm with which President Aristide will be welcomed in Haiti reflects not only the affection of Haitians for this individual and respect for the office to which he was elected, but also their cry for a legitimate democratic process. This means recognition of their favored political party, non-interference by foreign elements in Haiti’s internal affairs, and a respect for the political and structural changes brought about during President Aristide’s administrations.

We urge you to join Haiti Action Committee for an emergency rally Friday afternoon to support the historic return of Jean-Bertrand Aristide to Haiti. As many know, President Aristide and his family departed South Africa for Haiti today to banner headlines that read “Jean-Bertrand Aristide defies US by heading back to Haiti.”

While this marks a great occasion, still the next 24 hours are critical as the U.S. relentlessly pursues efforts to block the return of Haiti’s most popular leader. Dozens of prominent lawyers and law professors sent a statement today to U.S. Department of State Chief of Staff Cheryl Mills criticizing U.S. government interference with Aristide’s constitutional and human right to return from forced exile. There are rallies planned across the country in New York, Boston, Florida and the Bay Area to coincide with the anticipated popular celebrations in Haiti upon the arrival of President Aristide and his family.

We hope you will join us Friday, March 18, 4:30 p.m., at UN Plaza in San Francisco, Hyde at Fulton. Continue to demand the U.S. annul Haiti’s phony elections slated to be held this Sunday, March 20, between two right wing Duvalierist candidates who together won only 10 percent – 6 percent and 4 percent respectively – of the vote in widely discredited November elections.