by Eva Paterson and Reggie Shuford 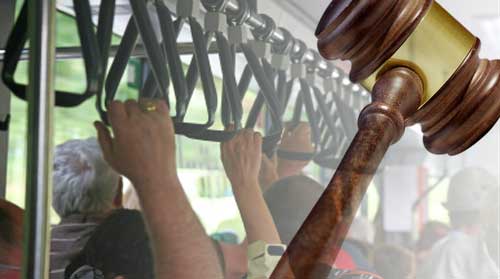 A recent decision handed down by the U.S. Ninth Circuit Court of Appeals raises this important question: Can victims of contemporary forms of discrimination and disparity find justice in our courts?

The court ruling came in the case of Sylvia Darensburg, an African-American mother of three who lives in East Oakland. Every day, along with tens of thousands of low-income African-American, Asian and Latino bus riders in the Bay Area, Sylvia experiences the reality of transit inequality.

According to the case, Darensburg v. Metropolitan Transportation Commission, Sylvia relies on the AC Transit bus system as her primary means of transportation to her job during the day and to college classes at night. She endures long waits for the two buses she needs to take, with each trip taking an hour or more each way. On her way home at night, she has to walk 12 blocks from the nearest bus stop in her neighborhood.

Sylvia is not alone in making such an arduous journey. Almost 80 percent of AC Transit riders are people of color, and over 70 percent have incomes below $30,000. Nearly 60 percent are entirely dependent on public transit.

In 2005, a group of law firms and nonprofit legal advocacy groups — claiming state and federal civil rights violations — filed suit in federal court in the hopes of getting Sylvia Darensburg and others like her equal access to quality transit services.

The suit charged that the Metropolitan Transit Commission’s (MTC) practice of persistently under-funding AC Transit, while investing in improving rail services, amounted to discrimination and had a disproportionate impact on low-income residents of color. Rail services are used primarily by individuals with incomes of more than $30,000 and who have other means of transportation. A greater percentage of white riders use rail services rather than bus services like AC Transit.

The suit asserted that MTC’s decision not to allocate greater funding for bus expansion projects in its Regional Transit Expansion Plan causes, at least in part, the fare hikes, service shortages, and lack of improvement on AC Transit buses that Sylvia and others experience.

In late February, the 9th Circuit derailed Bay Area low-income residents’ chances of getting improved public transportation services. The court ruled that Sylvia and other plaintiffs had failed to make a showing of discrimination because they failed to demonstrate how MTC’s funding decisions either intentionally discriminated against or had a disparate impact on them.

One of the judges went even further by decrying the fact that the lawsuit was brought in the first place.

Taking aim at what he described as “hopelessly outdated” racial categories, he concluded: “[I]n the Bay Area … social change has been fostered by liberal political attitudes and a culture of tolerance. An individual bigot may be found, perhaps even a pocket of racists. The notion of a Bay Area board bent on racist goals is a specter that only desperate litigation could entertain.”

Both the court’s decision and that particular judge’s concurrence ignore or fail to take into account how discrimination actually takes place in our society today. While we may no longer have George Wallace or his ilk chanting “Segregation now, segregation tomorrow, segregation forever!” on the school house steps, we do have well-documented and persistent racial disparities in virtually every measure of societal well-being, from employment, health and education to wealth, housing and encounters with the criminal justice system.

Research shows that today the majority of racial bias is structural or implicit. Structural or institutional racism refers to any system of inequality based on race. In America, it defines who has access to goods, services and opportunities — or, as in the Darensburg case, to quality transit services that can determine whether one can get to work or school.

By requiring that discrimination be intentional and explicit – an almost impossibly high bar – courts no longer provide a meaningful remedy to victims of discrimination and bias. The end result is that countless valid claims are lost, dismissed or never even brought.

If we are to solve the persistent disparities that remain embedded in our society today, judges, lawyers and the public must be better educated about how discrimination plays out in modern society and in the daily lives of people like Sylvia Darensburg. Only then will we stand a fighting chance of making America a place that can truly live up to its ideal of equal opportunity for everyone.

Eva Paterson and Reggie Shuford are president and director of law and policy, respectively, at Equal Justice Society. This story first appeared on New America Media.