Barry Bonds: The greatest, regardless

San Francisco – AT&T Park shook so hard I thought I was on a pogo stick the night Barry Bonds crushed a 3-2 Mike Bacsik pitch into right center to go past the great Hank Aaron and crown himself Major League Baseball’s all-time home-run king. He circled those bases to a deafening hometown roar. 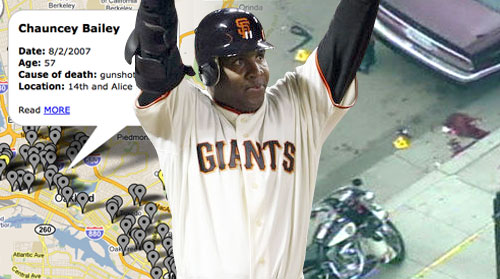 The real drama that night wasn’t whether Bonds would rewrite the records books, but whether Hank Aaron would acknowledge Bonds’ feat. Though Aaron didn’t attend, as is customary on these kinds of occasions, the aging ex-slugger did the next classiest thing, congratulating Bonds by video on the park’s big screen.

That four-bag trot and subsequent outpouring of adulation were the moments no one can take away from Bonds, regardless of what happens at his federal perjury trial. Jurors were chosen in the case Monday in the same city that praised his name that balmy yet windy August night when Barry Lamar Bonds became master of the baseball universe.

Bonds’ long journey from Bay Area local prep phenom – he was the son of San Francisco Giants’ Bobby Bonds and a graduate of Junipero Serra High School in San Mateo – to dazzling Pittsburgh Pirates rookie, to the high- priced free-agent savior of a floundering Giants’ franchise, to the bratty whining diva of the dugout, to “steroid boy” has been well documented and is the stuff of modern black comedy and tragedy.

Barry Bonds is no Hank Aaron. Bonds is a freer and richer man, a less classy man, from a generation that could live wherever they wanted, date and marry white girls and command top dollar for endorsements. Aaron made it to the promised land of integration, but he was made in the Jim Crow era, the last Negro League player to integrate into Major League Baseball in 1954. Thurgood Marshall slew that ol’ dragon, school segregation, in the same year. We were just getting free then. It was a different time.

Bonds was born in 1964, a year before the Voting Rights Act was passed. The “Whites Only” signs over water fountains had been torn down by the time Bonds was old enough to read.

Bonds is free. That’s part of the reason he is hated. If he is convicted of perjury, maybe he’ll start to be appreciated by the general public more. He will have been put in his place, something that no steroid-fueled pitcher of his era – or any of his many detractors in the sports media – was able to do.

The final irony: If convicted, he’ll be a convict that happens to be the all-time home-run leader in America’s game. Bonds is a Black man who inherited the American dream and is now peering over a cliff at the American nightmare, bracing for the final nudge into oblivion – still the greatest to ever play the game of baseball.

Chauncey Bailey: The carnage has no end in sight

Oakland – The murder trial of Yusuf Bey IV and Antoine Mackey for the killing of my colleague, journalist Chauncey Bailey, began Monday with the prosecutor laying out a seemingly airtight case against the defendants.

The 25-year-old Bey, leader of the shuttered Your Black Muslim Bakery, is accused of masterminding the hit that left Bailey lying dead on an Oakland street from shotgun wounds.

Weeks before his cold-blooded and cowardly murder, I saw Chauncey at a forum for ethnic media to discuss an article, written by a young Asian man, entitled: “Why I Hate Black People.”

In his remarks, Chauncey pointed out, “No one hates Black people more than Black people.” He was referencing the 100-plus murders in Oakland that year and the fact that the overwhelming majority of victims and perpetrators were African Americans.

In the bygone days, you used to be able to muster up righteous anger at allegations of police brutality as a Black man in America. Now all you would be doing is ignoring stone-cold reality. There were six police-involved shootings that resulted in four deaths in 2010 in Oakland. The city had more than 90 murders last year. So who should I be more worried about, the police or people who look just like me?

I’m still not over the shock and outrage I felt at Chauncey’s murder. I am humbly sobered by his prophetic testimony.

Bey IV was facing multiple felony charges in various Bay Area counties before he allegedly talked Devaughndre Broussard, the confessed triggerman, into gunning down Chauncey Bailey. If he and Mackey, the alleged get-away driver, are convicted of Chauncey’s murder, Oakland will still be left with questions even though the case will be closed.

The biggest question in my mind among the many left on the table is this: When will a critical mass of African-American people – especially young men – learn to value life enough that they won’t be so quick to take one?

Bey IV – if he is the killer the Oakland Police Department, the Alameda County District Attorney and the media think he is – personifies the lost mob boss mentality of the 20-something generation of Black men in impoverished neighborhoods across the country. The gang and drug turf-fueled predator image that emerged during the crack years, from the early ‘80s to the mid ‘90s, has given way to personal violence, the senseless kind of fratricidal carnage that has driven a quarter of Black people out of this one-time chocolate city by the Bay in the last 10 years. And there is no end in sight.

Lovelle Mixon: Rebellion without a cause

Oakland – This week will mark the second anniversary of Lovelle Mixon’s one-man rebellion that resulted in the death of four Oakland police officers.

“Mixon’s Rebellion” was ominously timed just a few months after the world witnessed the unlawful killing of Oscar Grant III on an East Oakland BART platform by ex-transit cop Johannes Mehserle. There is a cosmic link in my mind between the two incidents.

According to news reports, Mixon was a parolee and a suspect in multiple felonies, including rape, when he was pulled over by two Oakland police officers on motorcycles for a traffic violation. Mixon allegedly shot those two men to death, ran to a nearby apartment complex where his family members resided and during a raid by the Oakland Police Department on the apartment where Mixon was holed up, two other officers got laid down in a hail of AK-47 fire from a cornered Mixon. Mixon was later killed.

This story is like a ‘60s era Black exploitation movie-inspired grim fantasy. I imagine Richard Roundtree in a black leather quarter-length trench coat, his afro forming a halo around his hard dark brown face. Forearms flexing as he points a hand cannon, single handedly fighting it out with The Man for the liberation of the people.

But Mixon was no Shaft. By most accounts, he was a desperate thug with little or no politics, with access to high-powered firearms and nothing to lose.

The tendency then, after the romantic notion of a modern Black Superman gets blown up by the facts, would be to make this case a cut and dried instance of grand karma – unaccountable and brutal police get what’s coming to them through street justice served by a target of their own choosing, months after one of them shot one of us in the back on video tape.

No one knows if the Grant killing was in Mixon’s mind when he decided not to go down without a fight. Mixon was more than likely thinking about himself as he blasted those four lives away.

The tragedy here – besides the loss of life – is that the Black community has to rely on karma or supernatural intervention to receive the kind of justice that other Americans can take for granted. We have to be reduced to wishing that someone, something, would make police think twice before they racially profile another driver or use brutality as a regular piece of their job.

Before the trial that led to Mehserle’s conviction of involuntary manslaughter for killing Grant, no police officer in the history of Alameda County had ever been brought up on criminal charges for shooting an unarmed Black man. It is that long legacy of impunity afforded to police that burns the souls of Black folk, even in an age where we ought to be more concerned about the Lovelle Mixons of the world than the Oakland Police Department. Men like Mixon usually end up killing people that look like them.

Kevin Weston is a writer and director of new media at New America Media. This story originally appeared on NewAmericaMedia.org.