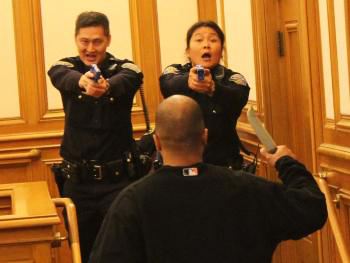 “If, at 50,000 volts a zap, five officers shoot their tasers at the same time, the subject gets a 250,000-volt output – equal to the electrical charge inside the death penalty chamber,” Mesha Monge-Irizarry, a leading advocate for police accountability, explained, comparing the fatal function of tasers used by police officers with the electric chair.

Batons, bean bags, weight-knuckled (zap) gloves, chokeholds and, of course, the gun: All are common uses of force by police officers. Codes of conduct limiting the use of force are often ignored. And now, the San Francisco Police Department wants to add to its arsenal the potentially deadly taser gun.

“If your son was tasered instead of shot, would he still be alive today?” a reporter asked Irizarry, whose only child, Idriss Stelley, was killed by nine San Francisco police officers in 2001 at the Sony Metreon Theater in a hail of 48 bullets. She replied, “No, he would’ve been fried to death.”

An estimated total of 400,000 volts would have traveled through his body.

Before former BART police officer Johannes Mehserle fired the fatal bullet onto the back of Oscar Grant, it was reported that Grant pleaded with him not to taser him. Theoretically, the outcome tragically could’ve been the same.

A taser is an electroshock weapon that generates electrical current to disrupt voluntary control of muscles. It fires approximately 50,000 volts and can drop someone from up to 15 feet away. Taser International is the chief developer, manufacturer and distributor of taser guns.

The San Francisco Police Commission held a hearing on tasers on Feb. 23. The proposal to arm the SFPD with this weapon caused chain reactions of outrage and fear in many San Francisco communities: people in poverty, youth of color, the elderly with mobility issues, homeless people, those who suffer mental health crises, undocumented immigrants and all system resisters.

My POOR News Network comrades – “Tiny,” aka Lisa Gray-Gracia, POOR co-founder, her son, Tiburcio, Bruce Allison, Ruyata Akio McClothin aka RAM and I arrived a half hour early at San Francisco City Hall. Outside the hearing room were many of our community comrades waiting to oppose this deadly proposal.

We had come to testify and report, yet we were shockingly met with resistance … from City officials.

A San Francisco sheriff’s deputy barred our entry until all the commissioners and command staff were “situated.” Apparently, the SFPD was afraid that community members were going to prevent police personnel from being seated.

Forced to form a line as if we were in a soup kitchen, we each held up a sign: “COPS + TASERS KILL!”

Finally after nearly an hour’s wait, we were allowed inside. The seats quickly filled. Throughout the hearing, police officers and sheriff’s deputies surrounded the room.

Bringing the meeting to order, Police Commission President Thomas Mazzucco requested that the item on tasers be “taken out of order.” This is a common tactic used by the commission and the Board of Supervisors to prolong presentations as an attempt to discourage public opposition.

Nearly five hours later, Mazzucco announced the item we were waiting for. Then he attempted to decrease our two-minute testimonies by 30 seconds. I would later criticize the entire commission for “not prioritizing the public.”

The commission heard numerous presentations from the department, proponents and opponents of tasers. Discussions took place regarding ramifications, research and even the costs involved. The reported estimated cost to arm the SFPD with tasers is $2 million. Where was the city going to find that funding, considering its current fiscal shortfalls, especially in light of recent reports the City is considering the layoff of 500 officers?

The SFPD claims that tasers are an “alternative approach to officer-involved shootings in death-related cases,” that they are intended for “de-escalating situations” without using “deadly force.”

“The San Francisco Sheriff’s Department has used tasers for eight years. I have found them to reduce injuries to citizens and officers when force is used,” San Francisco Sheriff Michael Hennessey has told me. An optimistic proponent, he added, “They cause temporary pain, but do not cause physical injuries, as do nightsticks, gas or guns.”

Jeremy Miller, activist and co-director of Education Not Incarceration, countered: “Almost all situations designated as crisis scenarios here would be inappropriate and unsafe for taser use.” During his public testimony, Jeremy pointed out his history of epilepsy. An encounter for him with a taser could be deadly.

Mesha Monge-Irizarry described her experience of being tasered … as a volunteer: “In 2004, Steve Tuttle of Taser International called me to fly two of his representatives to San Francisco from Arizona to do a promotional demonstration at Idriss Stelley Foundation. This was to gain a $1.2 million contract with the SFPD.”

As a result of volunteering to be tasered, she said: “One copper prong ended embedded in my right sciatic nerve, and the second damaged the conjunctive tissue between my right femur and the pelvic bone, aggravating my diabetic neuropathy. This is why I walk with a cane to this day.”

On the display screens in the meeting room were drawings showing alternative areas of the body to be targeted, as opposed to aiming at “center mass.” One of the critical areas was the groin.

An officer presented a “less lethal force” weapon before the commission. It looked like an old fashion Tommy gun, the machine gun used in old gangster movies. “It is a Penn Arms 40 millimeter multi-launcher,” the officer replied when I asked him what it was. It is used by SWAT teams. They can shoot a suspect at 250 feet with rubber bullets, causing significant blunt trauma. This appeared to be an attempt to sway support from the commission through intimidation.

“It is also important to keep in mind that tasers are NOT non-lethal weapons. They are less lethal,” stated Barbara Attard, a consultant for NACOLE, the National Association for Civilian Oversight of Law Enforcement. “In San Jose, at least six people have died after tasers were used on them. In two of those cases, the coroner ruled that the taser was a contributing factor in the death.”

In a racist mock theater display, two plain clothes officers, a Black man and a white woman, acted out a domestic dispute, with the man as the aggressor. Two uniformed officers of Asian descent responded to a 911 dispatch, weapons drawn. One drew a gun, the other a taser. The man suddenly pulled a knife from his back pocket and threatened them with it. Before he could advance further towards the officers, the performance was halted.

“I’ve been in at least 10 taser-related cases,” civil rights attorney John Burris told me. He too was at this hearing to present his opposition: “Tasers can be an abusive weapon.”

Officers from the Mission District Station testified about “life threatening” experiences. To me, this seemed like another attempt to blindside public opinion.

“Let me be fair for a moment here. How do we know that a police officer’s ‘use of force’ was really justified?” I asked during my own public testimony. “Police officers have lied, lied and lied so many times it’s difficult for anyone to determine if they’re telling the truth.” My comments were based on my personal experience of observing cops covering up their own crimes.

Dr. Chuck Wexler, executive director of the Police Executive Research Forum, presented his report and support for tasers. In mid-presentation, Wexler argued that tasers “were not made to kill.” His argument was met with ridicule from the audience. Commissioner Petra De Jesus, a taser opponent, fired back at Wexler regarding her concerns of serious ramifications if this weapon is adopted.

This same taser proposal had been brought before the commission last year. Then Police Chief George Gascon pushed for it but was narrowly defeated in a 4-3 vote. “I underestimated the political environment that I was operating under,” Gascon later told reporters.

In a last-minute move early this year before leaving office to become lieutenant governor, then Mayor Gavin Newsom appointed Gascon district attorney to complete the term of Kamala Harris, who was elected state attorney general. Gascon had contributed to Newsom’s campaign, as did an employee of Wilson Sonsini Goodrich & Rosati, attorneys for Taser International. Records of their contributions can be found at http://www.electiontrack.com/lookup.php?committee=1325415.

The commission voted to conduct further study and research on these “less-than-lethal” weapons. After 90 days, they will determine whether tasers will be use by police in San Francisco. If the proposal passes, elders, youth, pregnant women, houseless people, protesters, sit-lie law “suspects,” migrants and people in poverty will literally be in the line of fire.

Any weapon, whether advanced, sophisticated or “less than lethal,” that SFPD officers equip themselves with will, I believe, be used to express their desire to brutalize, criminalize and marginalize communities deemed undesirable.

From our own experiences, police culture is encourages terrorism. Arming the police with tasers does not modify the use of force. Rather, it ensures more cruel and unusual punishment, more torture.

Taser voltage silences our voices in our villages.

Marlon Crump is an activist and journalist with POOR Magazine and the Revolutionary Legal Advocacy Project. He can be reached at marliniumn@yahoo.com. To learn more, visit www.poormagazine.org and www.racepovertymediajustice.org.