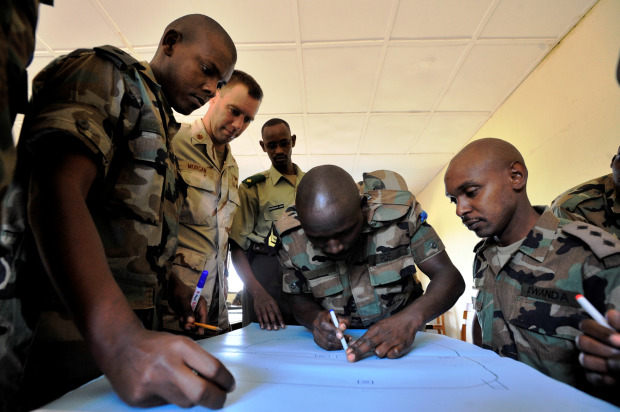 The U.S. bombing of Libya in support of rebel clients in the spring of 2011 is part and parcel of a sustained policy of military intervention in Africa since at least the mid 1950s. According to a U.S. Congressional Research Service study ((Lauren Ploch, “Africa Command: U.S. strategic Interests and the Role of the Military in Africa,” Congressional Research Service (CRS) Nov. 16, 2010)) published in November 2010, Washington has dispatched anywhere between hundreds and several thousand combat troops, dozens of fighter planes and warships to buttress client dictatorships or to unseat adversarial regimes in dozens of countries, almost on a yearly basis.

The record shows U.S. armed forces intervened 46 times prior to the current Libyan wars. ((Richard Grimmett, “Instances of Use of United States Armed Forces Abroad 1798-2009,” CRS 2010)) The countries suffering one or more U.S. military intervention include the Congo, Libya, Chad, Sierra Leone, Somalia, Ruanda, Liberia, Central African Republic, Gabon, Guinea-Bissau, Kenya, Tanzania, Sudan, Ivory Coast, Ethiopia, Djibouti and Eritrea. The only progressive intervention was in Egypt under Eisenhower, who forced the Israeli-French-English forces to withdraw from the Suez in 1956.

Under the Clinton regime, U.S. militarized imperialism in Africa took off. Between 1992 and 2000, 17 armed incursions took place, including a large scale invasion of Somalia and military backing for the Rwanda genocidal regime. ((Edward Herman, “Gilbert Achar’s Defense of Humanitarian Intervention,” ZNET April 8, 2011)) Clinton intervened in Liberia, Gabon, Congo and Sierra Leone to prop up a long standing stooge regime. He bombed the Sudan and dispatched military personnel to Kenya and Ethiopia to back proxy clients assaulting Somalia.

The Obama regime’s invasion and bombing of Libya is a continuation of a longstanding imperial practice designed to enhance U.S. power via the installation of client regimes, the establishment of military bases and the training and indoctrination of African mercenary forces dubbed “collaborative partners.” There is no question that there is a rising tide of imperial militarism in the U.S. over the past several decades.

The Obama regime’s invasion and bombing of Libya is a continuation of a longstanding imperial practice designed to enhance U.S. power via the installation of client regimes …

Most of the U.S.’ African empire is disproportionally built on military links to client military chiefs. The Pentagon has military ties with 53 African countries – including Libya prior to the current attack.

Washington’s efforts to militarize Africa and turn its armies into proxy mercenaries in putting down anti-imperial revolts and regimes were accelerated after 9/11. The Bush administration announced in 2002 that Africa was a “strategic priority in fighting terrorism.” ((The White House, “National Security Strategy of the United States,” September 2002)) Henceforth, U.S. imperial strategists, with the backing of liberal and neoconservative Congress people, moved to centralize and coordinate a military policy on a continent-wide basis, forming the African Command (AFRICOM). The latter organizes African armies, euphemistically called “co-operative partnerships,” to conduct neo-colonial wars based on bilateral agreements (Uganda, Burundi etc.) as well as “multi-lateral” links with the Organization of African Unity. ((Lauren Ploch, op cit esp pp19-25))

AFRICOM, despite its assigned role as a vehicle for spreading imperial influence, has been more successful in destroying countries than in gaining resources and power bases. The war against Somalia, displacing and killing millions and costing hundreds of millions of dollars, enters its 20th year, with no victory in sight.

AFRICOM, despite its assigned role as a vehicle for spreading imperial influence, has been more successful in destroying countries than in gaining resources and power bases.

Apart from the longest standing U.S. neo-colony, Liberia, there is no country willing to allow AFRICOM to set up headquarters. Most significantly, AFRICOM was unprepared for the overthrow of key client regimes in Tunisia and Egypt – important “partners” in patrolling the North African Mediterranean, the Arabian coast and the Red Sea.

Despite Libya’s collaboration with AFRICOM, especially in “anti-terrorist” intelligence operations, Washington mistakenly believed that an easy victory by its “rebel” clients might lead to a more docile regime, offering more in the way of a military base, headquarters and a cheap source of oil. Today the U.S. depends as much on African petroleum as its suppliers in the Middle East.

Washington mistakenly believed that an easy victory by its “rebel” clients might lead to a more docile regime [in Libya], offering more in the way of a military base, headquarters and a cheap source of oil.

The continent-wide presence of AFRICOM has been matched by its incapacity to convert “partnerships” into effective proxy conquerors. The attempt to foster “civil-military” programs has failed to secure any popular base for corrupt collaborator regimes, valued for their willingness to provide imperial cannon fodder.

The continuing North African uprising overthrew the public face of the imperial backed dictatorships. As the popular Arab revolt spreads to the Gulf and deepens its demands to include socio-economic as well as political demands, the Empire struck back. AFRICOM backed the assault on Libya, the crackdown on the prodemocracy movement by the ruling military junta in Egypt and looks to its autocratic “partners” in the Gulf and the Arabian Peninsula to drown the civil society movements in a blood bath.

The growing militarization of U.S. imperial policy in North Africa and the Gulf is leading to a historic confrontation between the Arab democratic revolution and the imperial backed satraps; between Libyans fighting for their independence and the Euro-American naval and air forces ravaging the country on behalf of their inept local clients.

James Petras, a sociology professor at Binghampton University of New York, is the author of more than 62 books published in 29 languages, over 600 articles in professional journals and 2,000 in major newspapers, from the New York Times to Le Monde Diplomatique. Visit him at petras.lahaine.org.