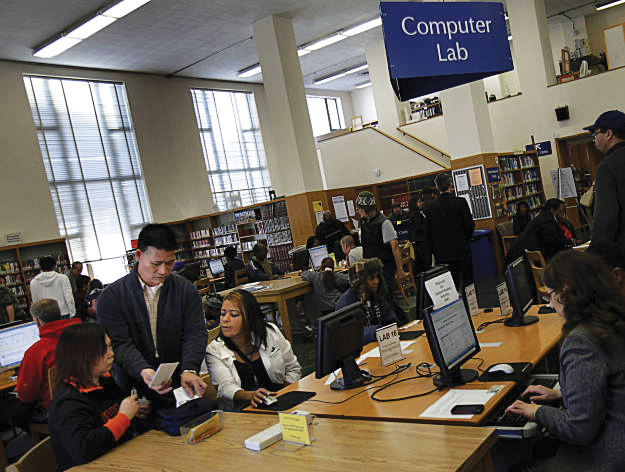 Oakland – On April 14, the draconian budget slashing proposal known as HR 1473, which was promoted by Tea Party radicals and right-wing Republican extremists, was passed in the House and the Senate and was signed into law by President Obama. Around $38 billion was cut from the nation’s domestic programs in a skirmish that nearly shut down the government, and HR 1473 is recorded as being the most extreme budget cutting legislation passed by Congress in American history.

People are so desperate in these harsh economic times, when the rich are not paying their fair share of taxes, that during January of 2011, the Oakland Housing Authority opened up its Section 8 (Housing Choice Voucher Program) waiting list, and it was estimated that around 100,000 needy low-income families would apply for the coveted subsidized Section 8 housing vouchers during the five-day application period. The Section 8 voucher contracts allow low-income households to pay only 30 to 40 percent of their income towards rent, and the government subsidizes the remainder in monthly rental payments to the landlord.

Despite the need for more Section 8 vouchers for the poor, Oakland Housing Authority executive director Eric Johnson stated in a Chronicle article, “There are currently only 650 vouchers available, and about 50 vouchers get freed up every month.”

With the passage of HR 1473, the nation’s housing programs and many other programs for the poor and the working class took some mammoth funding cuts. In part its passage was due to a number of Democrats who sided with the extremist Republicans in shredding the safety net, including California Sens. Barbara Boxer and Dianne Feinstein. Additionally, a number of California’s members of the House of Representatives also sold out and voted for HR 1473, including Jackie Speier, Anna Eshoo, Jim Costa, Michael Thompson, Brad Sherman, Howard Berman, Adam Schiff and Susan Davis.

HR 1473 cut $504 million from the Women, Infants and Children (WIC) program. The WIC program is a federally subsidized food program administered by the states that serves nutritionally at risk low-income pregnant, postpartum and breastfeeding women, infants until their first birthday and children up to the child’s fifth birthday.

Additionally, $600 million was cut from the budgets of community health centers all across the nation. Soaring food prices make these draconian budget cuts to programs serving women, infants and children even more devastating at a time when families are least likely able to afford the barest of necessities just to survive.

HIV and disease-prevention funds were cut by $1 billion, and HR 1473 cut $25.1 million out of the Veterans Affairs Supportive Housing Voucher Program, grabbing over half of the funding from the veterans’ much cherished housing program. The veterans’ housing program’s present funding totals only $49.9 million and, according to the National Coalition for the Homeless, 23 percent of homeless people in America are veterans and 33 percent of the men who are homeless are veterans.

Since passing HR 1473, the Republicans smell blood and they want even deeper budget cuts to the nation’s domestic programs. On April 15, the Republicans in the House of Representatives passed new legislation called the Path to Prosperity in an effort to shrink the government so small that it could be drowned in a bathtub.

The proposal known as a Path to Prosperity is a scheme to make the rich even richer. It attacks Medicaid, Medicare and Social Security and among other things would cut $6.2 trillion mostly from `domestic programs during the next decade, devastating the poor, elderly and disabled. It also offers an additional $800 billion in tax breaks and would block the $1.5 trillion Bush-era tax breaks to the rich and super rich from ever expiring.

With so many Democrats siding with Republicans lately in the attacks on the poor, the poor and working class do not have proper representation in Congress, so we must speak out to represent ourselves.

The Tea Party-GOP’s so-called Path to Prosperity proposal is a master plan to enrich the already wealthy, while creating a Path to Homelessness for everyone else.