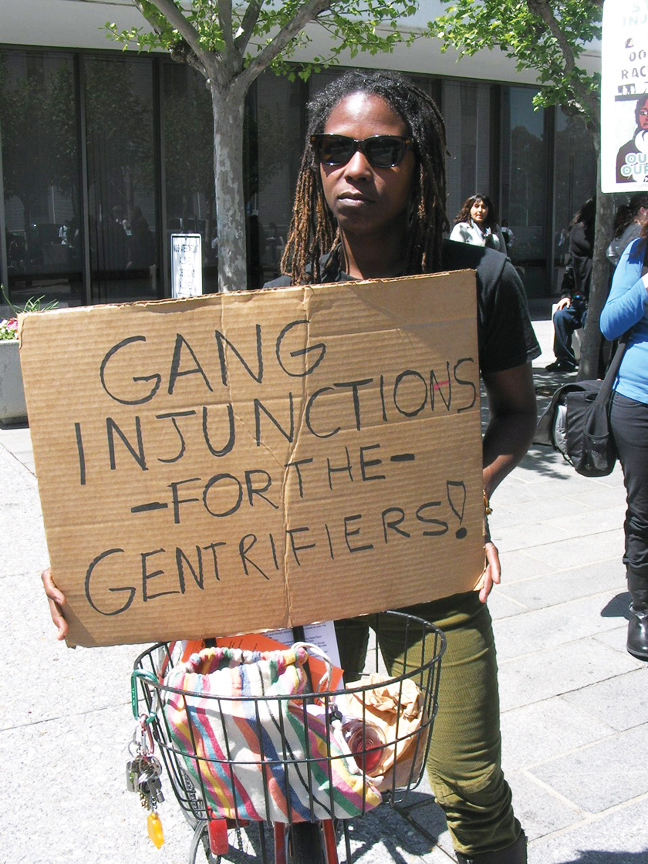 Labeled a crime fighting tool, gang injunctions are ineffective, counter-productive and further strain the relationship between residents and police. Oakland City Attorney John Russo, ironically on his way out of Oakland to work for the City of Alameda, thinks otherwise and has allocated scarce taxpayer dollars to implement them.

Study after study has shown that gang injunctions do not reduce gang activity or crime yet provide a basis upon which to uproot mostly Black and Brown residents from areas targeted for real estate development – part of an overall gentrification process.

At the town hall community meeting held April 2 at the North Oakland Senior Center, hosted by Mayor Jean Quan and City Councilwoman Jane Brunner, a mother opposed to Russo’s gang injunction pleaded for relief from police harassment. Her son, a student who also holds down a job, was attacked by police while in their driveway.

She is furious at the overly aggressive turn the police in North Oakland have taken since the gang injunction for that area took effect. She wants answers that Russo’s office cannot seem to provide on topics of mistaken identity and harassment.

Not only residents but Black- and Brown-owned small businesses on land coveted by developers are also targeted. Last year John Russo convinced the Oakland City Council to close a small, unsuspecting North Oakland minority owned business. The owner, a former Alameda County sheriff’s deputy, had planned his retirement in part on his small neighborhood store. Although the store never had problems with loitering, noise or crime, it was targeted by Russo then cited for removal. The council held that too many stores were planted on the North Oakland intersection.

Other minority owned small businesses are subject to the whims of real estate development plans for North Oakland and the City of Alameda, where Russo aims to work. Joe Dorsey, another North Oakland minority small business owner, came out to the town hall to object to the gang injunction, then hurriedly returned to his popular neighborhood restaurant. The police have been harassing his customers.

With all due respect to the many cops who uphold the law, the OPD has too many rogue cops like “the Riders,” who have not yet been held accountable for their actions. This is why the Oakland Police Department is currently under threat of federal receivership by a U.S. District Court judge.

Consequently, Oakland cannot be trusted with unfettered police power, which is what gang injunctions allow – named defendants are guilty until proven innocent. The issue that must be addressed if positive change is to be realized is increased opportunities for youth, legal scholars say.

Oakland cannot be trusted with unfettered police power, which is what gang injunctions allow – named defendants are guilty until proven innocent.

Mary Louise Frampton, faculty director of the Thelton Henderson Center for Social Justice at UC Berkeley School of Law (Boalt Hall), who sponsored a community forum on restorative justice in February hosted by Oakland Mayor Jean Quan and Oakland Unified School District Superintendent Tony Smith titled “Dismantling the School to Prison Pipeline,” says: “Too much of our state economy feeds off the incarceration of youth. Those who work in that capacity should be retrained.” Civil Rights Attorney John Burris says California’s Department of Corrections constantly needs new “dog food for the dog pound.”

Real estate developers encourage injunctions because they gain more territory to develop by ridding entire districts of people of color. North Oakland and now the Fruitvale District, both covered by gang injunctions, are two of the hottest markets in Oakland for real estate development.

Whatever gang injunctions could do to fight crime is vastly outweighed by their burden upon the innocent. The net that is cast is too broad, sweeping up innocent youth and their families together with “suspected” gang members. OPD Officer Frank Morrow said that “Russo’s office in their effort to convince the court to grant the injunction wanted me to sign an affidavit with fabricated facts.” He refused and his job is now under threat.

Gang injunctions are designed to protect the priorities of working class whites, financial institutions, real estate developers and overly ambitious politicians. In his “I Have a Dream” speech, Dr. Martin Luther King Jr. lamented this dynamic. King said, “People of America’s different races and backgrounds should join hands and rejoice in being ‘free at last’ from prejudice, which imprisons the bigot as much as the victim.” Many poor whites continue however to vote against their financial interests.

Yolanda, a Latina mother whose last name is withheld due to her fear of harassment, spoke at the public safety breakaway session at the town hall meeting. She lived in North Oakland until her home of 20-plus years was suspiciously burned down after whites moved in nearby and decided she was a risk.

Real estate developers and financial institutions provide generous support to the campaigns of politicians like John Russo, whose pattern is clear: Seek injunction after injunction to rid the entire city of Oakland of people of color, no matter the collateral damage that results.

After donating to the election campaigns of Alameda’s mayor and at least two council members who are charged with selecting the next city manager, Russo was recently offered the position and, on Friday, April 29, accepted it. As city manager, he will be charged with the task of developing Alameda’s Naval Air Station.

Russo’s interest in the City of Alameda and Oakland turns on real estate. Just ask the immigrant motel owners, also victims of Russo as they fight to keep their businesses open. Russo has targeted them as a public nuisance that contributes to prostitution. Legal Experts Document Preparation of Oakland and Alameda, a provider of legal self-help tools and information to people who cannot afford pricey attorneys, was targeted, harassed, threatened and now shut down at the direction of Russo.

Small businesses like these receive undue scrutiny and premature closure without notice or opportunity to be heard, a violation of due process, yet Russo continues to overlook Wells Fargo Bank and their many infractions upon homeowners during the height of Oakland’s foreclosure crisis. It is no surprise that the John Russo family is in the business of real estate development.