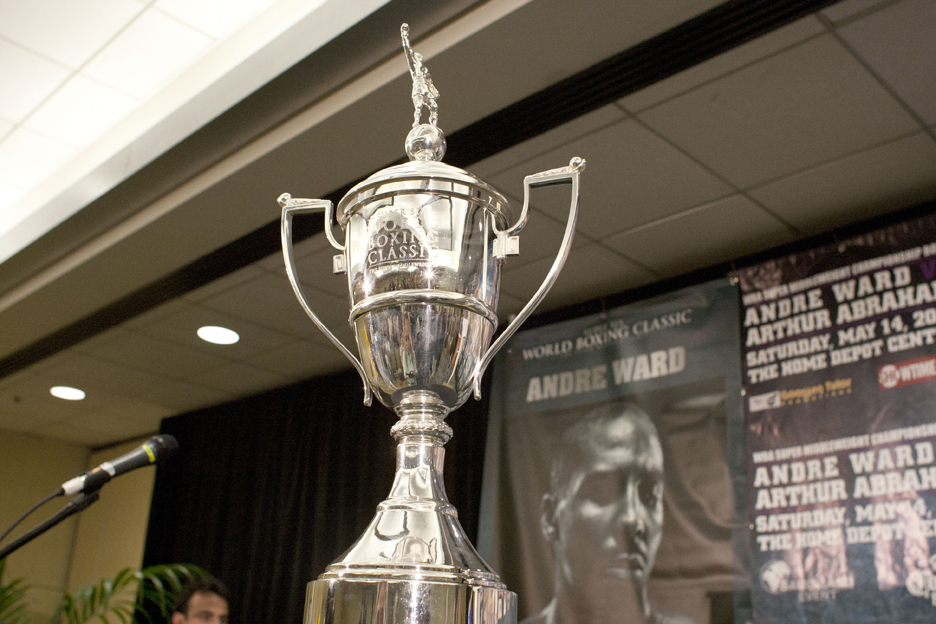 Armenian-born “King Arthur” Abraham’s prevailing thoughts going into the Super Six World Boxing Classic were that he couldn’t “win on points in America,” so his game plan was to attempt to knock “Son of God” Andre Ward out.

He felt that all he’d have to do was to hit Ward hard once or twice, and then he could just bowl him over and knock him out.

As it turned out, Arthur Abraham couldn’t win at all in America, whether it be on points or not, for the man calling himself “The King” was dethroned by the scientific boxing of Andre “Son of God” Ward.

The first semi-final bout of the WBA Super Six World Boxing Classic Super Middleweight championships had a texture and feel about it that was bigger than Andre Ward continuing his winning ways.

You could just feel a new dimension of boxing being ushered in, feel the growth of a fighter moving to the next level in his boxing style, adding another level of finesse and comprehension to his art – and to the art of boxing.

Ward, who hasn’t lost a boxing match since he was 12 years old, fought in a superlative and scientific manner against an opponent whom he described as having “heavy hands,” indicative of a man who hits hard.

But Andre Ward, who always fights by methodically breaking down his opponents psychologically outside the ring and then demolishing them psychologically and physically in the ring – began the climb to a whole ‘nother boxing level in this first semi-final bout.

On this night, Andre was impressive in his ability to quietly adjust his battle plans in the face of challenges in the ring that were not confined to slipping Abraham’s punches.

In front of 5,311 energetic fans, Andre Ward showed the world that he could fight southpaw momentarily, to set up an opponent looking for the big knockout punch; that he could keep his opponent off balance in true chameleon fashion by outwitting a man who fought in a closed, awkward, turtle like manner; that he could simultaneously keep his cool in the face of a hostile crowd. 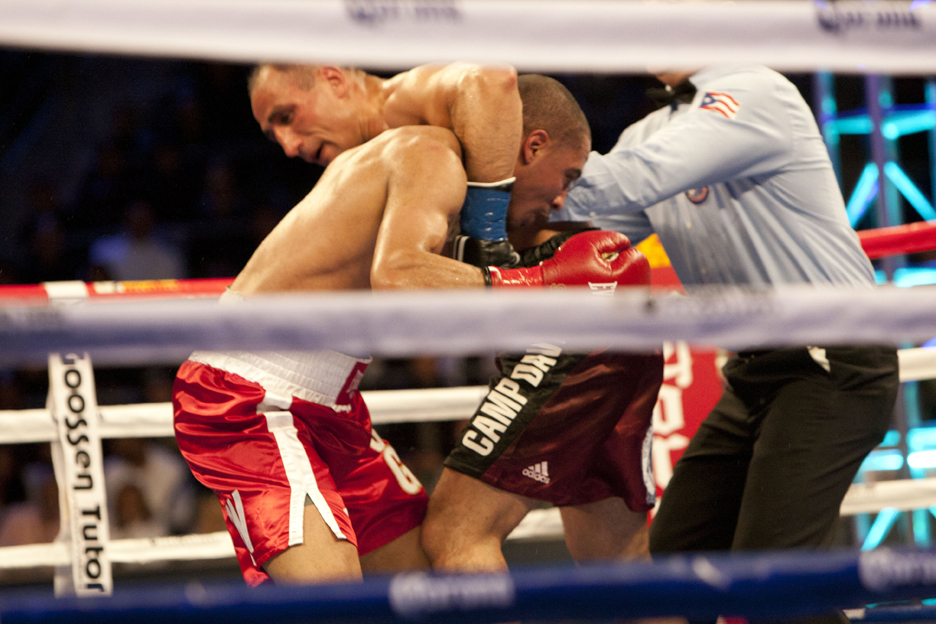 On this night, Andre Ward proved his mettle by out-punching Abraham’s heavy hands, by being quick and effective with his jabs, by being light on his feet and mobile in his aggressive command of the ring.

In a masterful 118-110, 120-108, 118-111 unanimous decision, Andre Ward dethroned an opponent who used knees, elbows and choke holds in a last ditch, desperate “survival” attempt to win – an opponent who was determined to “provide a spectacular show” for a large Armenian presence.

And as an aggressively hostile and drunken crowd hurled epithets and curses, booed, waved Armenian and German flags, screamed “USA” and “Arthur” at the tops of their considerable lungs, Andre’s supporters showed their love by roaring back “Andre” and “SOG” and by celebrating his impressive victory!

Ward smiled and later described the entire situation as being “fun!”

Repeated attempts by crowd and opponent to rattle Ward into falling for their champion’s tricks were reminiscent of Shakespeare’s play, “Much Ado About Nothing,” where all tactics utilized by the challenger’s contingent were nothing more than failed attempts to rally their losing champion.

Onward Abraham plodded, in what he later described as a “tactical error in the third round,” with grim determination to stick to his attempts to knock Ward out.

But he was outclassed: Ward out-thought him, dissected him and beat him. Period. Even the center referee’s tactic of disallowing Ward’s repeated attempts to fight an inside fight availed Abraham no respite.

Ward just switched gears and brought the rain by methodically picking apart Abraham’s turtle shelled defense with solid combinations of punches, as Abraham hid in vain behind the arms he held up to his face throughout the fight. His attempted “peek-a-boo”* style of defense destroyed, Abraham tired easily.

His famed heavy hands became hands of cement, doing little damage and hurting Ward not at all. And when Abraham attempted to tie Ward up in headlocks and other grappling moves, Ward slipped them and came back with combination onslaughts which forced Abraham to realize by the fourth round that he could not win a boxing match against Andre Ward.

From that point on, it was all over but the shout and, even though it was evident that Ward was well ahead in points, Andre fought until the final bell, instead of coasting along, earning a decisive unanimous decision.

As skillfully as that was Arthur “The King” Abraham dethroned – in his own backyard, in front of his own. 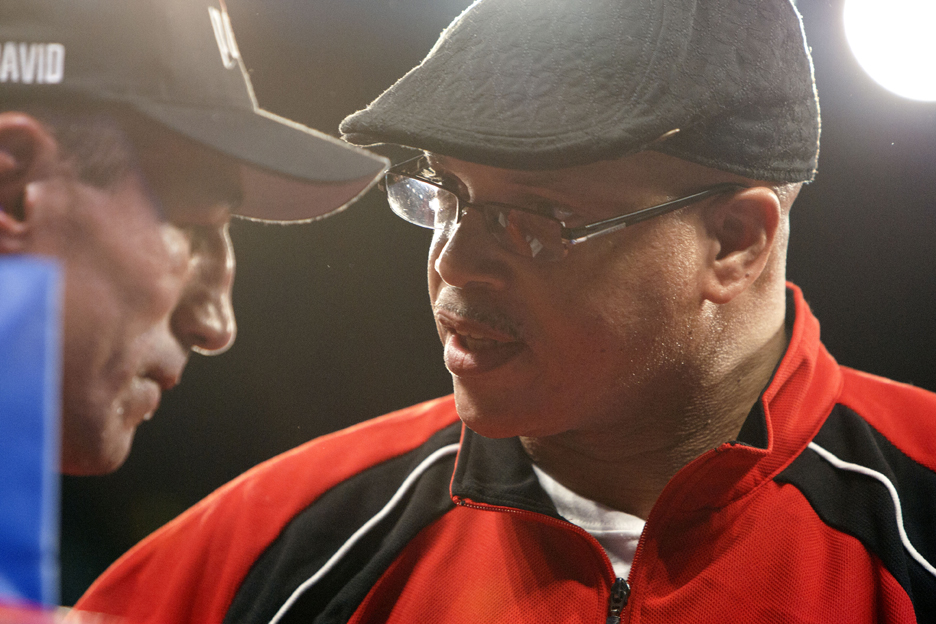 And with the class and grace which is a trademark of Team Ward, Virgil Hunter, Andre’s trainer told Arthur Abraham after the fight that he was a great champion, that he has a great future as a middleweight – given that Abraham was fighting out of his weight class as a super middleweight – and that he hopes Abraham doesn’t give up due to his present situation.

And Mr. Hunter meant what he said.

Andre “Son of God” Ward thanked God for his victory that evening, while quietly ushering in a new era in boxing.

Generations of skill and intelligence are continuing his development: knowledge passed on from the veteran Oakland trainer Bobby Warren, mentor to Virgil Hunter, and from Virgil Hunter’s training and mentorship of champion Andre Ward.

Whoever triumphs in the semi-final bout between Carl Froch and Glen Johnson on June 4, 2011, will face Andre “SOG” Ward in the final battle. Winner takes all: the Super Six World Boxing Classic championship trophy and the WBC-WBA title belts.

Stand up and look around, world, for a new dimension has been added to the “sweet science” called boxing. 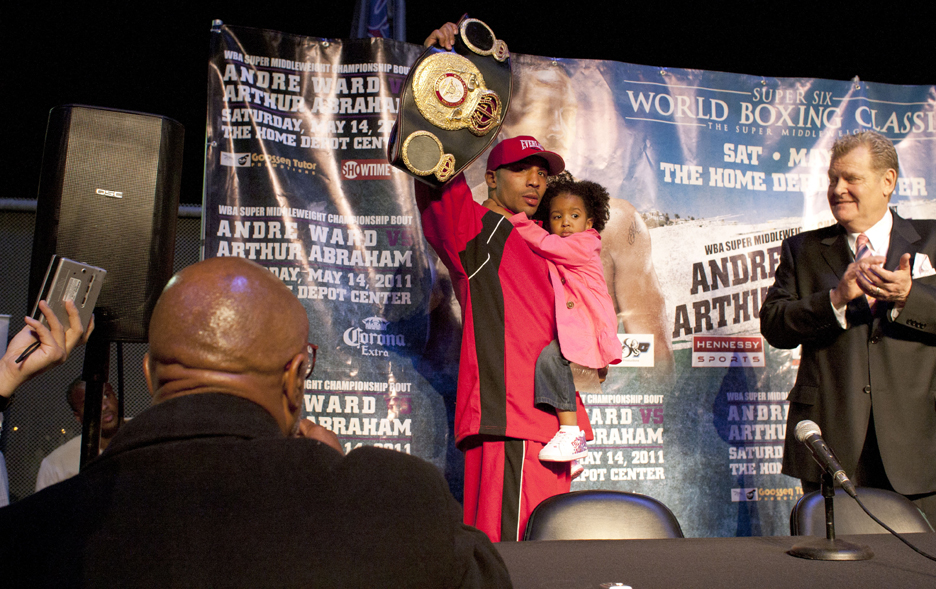 Hail hero well met, a victory according to Ward’s rules.

*The “peek-a-boo” style of boxing was developed by legendary trainer Constantine “Cus” D’Amato. Peek-a-boo boxing utilizes relaxed hands with the forearms in front of the face and the fist at nose-eye level. Other unique features include side-to-side head movements, bobbing, weaving and blind-siding your opponent. The number system, e.g. 3-2-3-body-head-body or 3-3-2 body-body-head, is drilled with the stationary dummy and on the bag until the fighter is able to punch by rapid combinations with what D’Amato called “bad intentions.” The style allows swift neck movements as well quick ducking and bad returning damage, usually by rising uppercuts or even rising hooks.

“To be a champion, you have to prove that you can prevail against many different odds and circumstances,” observes 2004 Olympic Gold Medalist and WBA Super Middleweight Boxing Champion of the World Andre “Son of God” Ward.