Los Angeles – Because California penal code does not classify involuntary manslaughter as a “violent” or “serious” offense, Johannes Mehserle, the convicted killer of Oscar Grant, could be released as early as mid-June of this year, after serving less than one year behind bars. 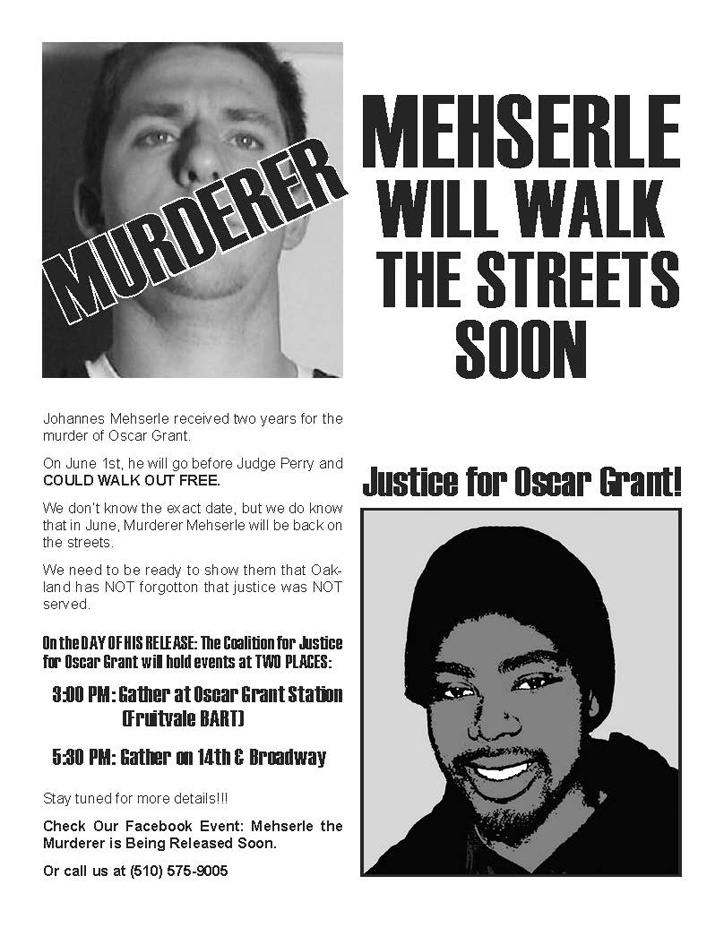 But while the Los Angeles County Sheriff’s Department (LASD) lists June 1 as the date for a court hearing to schedule Mehserle’s release, that hearing may or may not happen, depending on who you talk to.

According to Luis Patino, a communications consultant for the California Department of Corrections and Rehabilitation (CDCR), the purpose of the June 1 hearing is to review Mehserle’s “sentencing credits and determine whether or not his release date is correct. At this point, the release date is projected to be the middle of June.”

The LASD has jurisdiction over the Men’s Central Jail where Mehserle has been held since July 8, 2010, after a jury found him guilty of involuntary manslaughter in the death of Grant, who was shot by Mehserle while lying face down on an Oakland Bay Area Rapid Transit (BART) platform at 2:13 a.m. New Year’s Day, 2009. Mehserle claimed to have mistaken his service weapon for a taser gun.

According to the sheriff’s website, Mehserle’s hearing is set for 8:30 a.m. before Judge Robert Perry. However, Connie Fernandes, an assistant to Mehserle’s defense attorney, Michael Rains, stated that the hearing was “not going to happen.”

Further details were not available from Rains’ office as of press time.

An inquiry was made about the discrepancy with the court clerk. However, that call was not returned by press time. 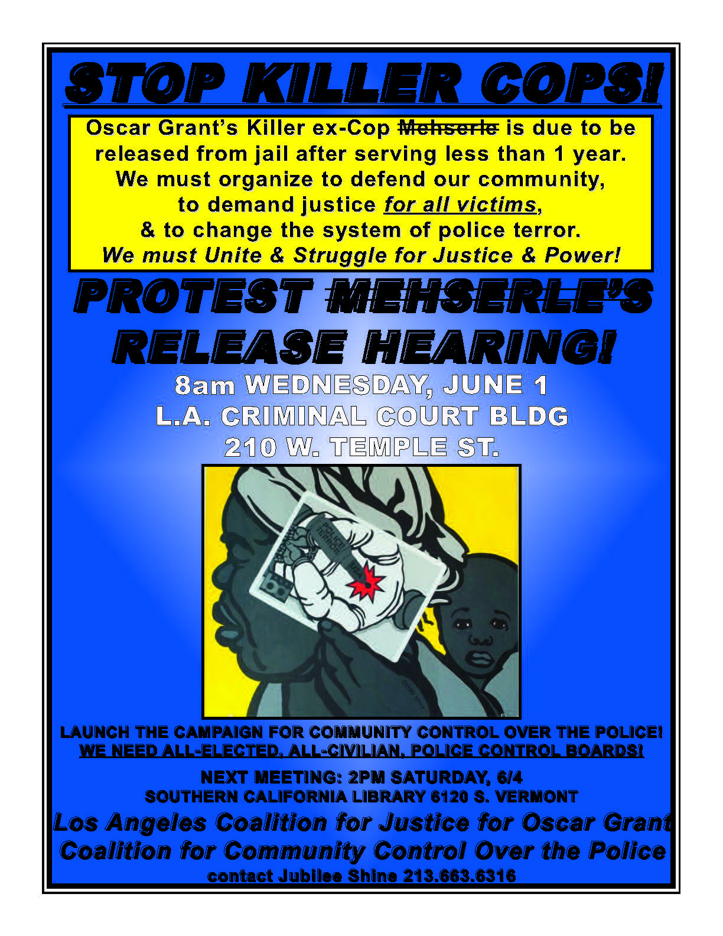 Per the California Penal Code, Section 4019, which was amended and approved by former Gov. Schwarzenegger in October 2009, “certain prisoners shall earn one day of credit for every one day served either in the state prison or in a local facility prior to delivery to the state prison.”

Patino says that involuntary manslaughter is indeed considered to be a non-violent offense but that other factors weigh in on the calculation of a state prisoner’s sentence: “The type of crime committed, the classification of the crime, the time it is committed, the laws in effect at that time, interpretation of the law etc.,” said Patino.

Due to the classification of being a non-violent felon, Mehserle could walk free in the next few weeks after serving less than one calendar year of his prison sentence.

In Oakland and in Los Angeles, where Mehserle’s trial took place and he is currently being held, reaction to the news of Mehserle’s classification was met with shock and anger among activists and observers of the case.

“I don’t know how much more violent you can get than killing someone!” said Tiah Starr, an organizer with the October 22nd Coalition against Police Brutality, one of the founding organizations of the Los Angeles Coalition for Justice for Oscar Grant.

“I don’t know how much more violent you can get than killing someone!” said Tiah Starr.

“It’s insane that he only did a year in jail and Oscar Grant is dead … it just makes no sense to me,” said Starr.

Sheilagh Polk, a former Los Angeles resident who moved to Oakland four years ago, felt that the charge of involuntary manslaughter never should have been an option. “Mehserle … should have been convicted of second degree murder; he pulled out his gun, cocked it, pulled the trigger and executed an unarmed, young Black man with full confidence that he would get away with it. And he did,” she said.

Davey D, a journalist and 20-year resident of the Bay Area, felt that the non-violent designation was just one more indicator of the justice system’s failure to work for African Americans. “At the end of the day, this is just a repudiation of Black life,” he said. “That’s what this all boils down to – the verdict, the picking of the jury, the sentencing – this is all a refusal to acknowledge and see Black life as something that is valuable.”

“At the end of the day, this is just a repudiation of Black life,” said Davey D. “That’s what this all boils down to – the verdict, the picking of the jury, the sentencing – this is all a refusal to acknowledge and see Black life as something that is valuable.”

Whenever the sentencing review hearing is held, Patino says, as a matter of policy the CDCR will not release the specific date and time of Mehserle’s release. “It’s for the safety of the inmate, our employees and, many times, the public,” he said.

Thandisizwe Chimurenga is a community journalist and a founder and host of Some of Us Are Brave, a Black women’s public affairs show on KPFK-Pacifica Los Angeles. She has worked with the L.A. Watts Times newspaper, the KPFK Evening News and Free Speech Radio News. She covered the trial of Johannes Mehserle, who murdered Oscar Grant, for the Bay View and several other Bay Area news organizations and is the author of a forthcoming book on the trial. She can be reached at tchimurenga@gmail.com. Follow @OscarGrantTrial. This story first appeared on New America Media.