San Francisco – A San Francisco police officer accused of stealing items from a man’s residential hotel room following a drug arrest has been captured on video in a second incident, appearing to leave a residence at the Julian Hotel with property never booked into evidence. 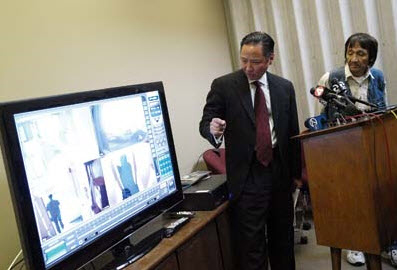 The video, released Tuesday, May 17, by San Francisco Public Defender Jeff Adachi, comes less than a week after Adachi released surveillance footage documenting a similar incident on Dec. 30 at the Jefferson Hotel.

In the most recent video, officers can be seen walking into the building empty-handed. However, Guerrero is later seen leaving with property that appears to be consistent with a laptop inside a bag, which was confirmed missing from the room later that day along with a camera. Vargas is carrying a second bag containing unknown items. Neither bag was booked into evidence.

Officers arrested resident Jesus “Jessie” Reyes, 64, for possession for sale of methamphetamine. Prosecutors dropped the charges against Reyes May 4 after Guerrero failed to show up to testify despite a subpoena. Reyes had never before been arrested, said his attorney, Deputy Public Defender Cindy Elias.

“This incident, coupled with similar footage at the Henry, Royan and Jefferson hotels, indicates there are groups of officers engaging in systematic misconduct,” he said.

In the police report, written by Fegan, police claim Reyes matched a description provided by a confidential informant and stopped him as he sat in his minivan. Fegan wrote that Reyes agreed to let police search his van and then offered to let them search his room.

In Reyes’ sworn declaration, however, he states that at no time did police ask his permission to search the van and that he never consented to any search. Police did not respond when Reyes asked if they had an arrest warrant, he said.

According to Reyes, officers searched his person, took his keys and searched his room while he waited outside the room with Fegan. Reyes specifically told police not to search his room and asked if they had a search warrant, but was ignored, he said.

After being booked into jail, Reyes’ reading glasses were taken from him and he was asked to sign a form that he believed was to return his personal property. He did not learn he had signed a search consent form until he went to court.

When Reyes was released from jail, his wife – the only other person with keys to the room – informed him that their nephew’s laptop computer was missing. A Sony Cybershot 12-megapixel camera was also missing.

Police enter the Julian Hotel without bags. When they leave, the last two police to exit are carrying a laptop bag and another bag. Neither was listed on the police property sheets.

A troubling surveillance video released by the Public Defender Jeff Adachi on May 11 reveals San Francisco Police Department officers physically attacking a bystander after illegally searching the room of a residential hotel resident. 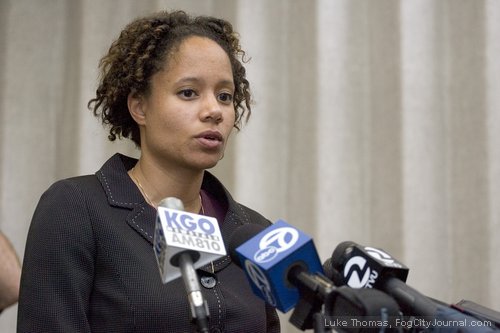 “With Police Chief Greg Suhr taking the helm, the time is ripe for a culture change in our city’s police department,” Adachi said. “Officers who are caught breaking the laws they should be upholding or brutalizing the citizens they should be protecting have no place serving San Francisco.”

The latest video, which shows a Dec. 30, 2010, drug arrest at the Jefferson Hotel, contradicts police officers’ sworn statement on several counts and appears to support the resident’s claim officers stole his property. In the report, police justify detaining 48-year-old Fernando Santana in the hotel lobby after claiming to see crack cocaine in his outstretched hand.

In the video, however, Santana’s hands are in his pockets. Police, who claim to have Santana’s permission to search his residence, are seen on surveillance tape searching the room while a handcuffed Santana shakes his head.

Perhaps the most shocking moment of the video occurs several minutes into the search, when a bystander is seen casually walking up to the room and peeking inside. As he begins to walk away, Officers Ricardo Guerrero and Peter Richardson sprint from the room and violently tackle him in the hallway, placing him in a choke hold.

The officers hold the bystander while Officer Robert Sanchez and Sgt. Kevin Healy search him, finding nothing. The man is released. In the police report, this interaction is described only as a brief detention.

Santana, who was arrested for possession for sale of crack cocaine, filed a police report following his release from jail after realizing a black duffel bag and numerous electronics and other valuables were missing from his room. Santana believed hotel personnel had stolen the property while he was incarcerated. 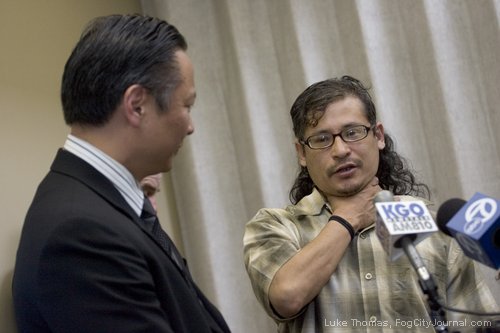 However, the surveillance video, which was obtained after Santana reported the items stolen, shows Guerrero walking out of Santana’s room with a full black duffel bag. The bag was never booked into evidence nor mentioned in the police report, said Santana’s attorney, Deputy Public Defender Qiana Washington.

Other important aspects of the arrest left out of the police report but revealed in the footage include officers searching Santana’s lobby mailbox and Guerrero visiting other floors of the hotel prior to directing his attention to Santana. Guerrero testified in a May 5 hearing that he followed Santana into the hotel after seeing him conducting a narcotics transaction outside.

In fact, video footage shows Guerrero enter the hotel just ahead of Santana, go directly upstairs and wander through several floors. It was only after Guerrero left the hotel and later returned that Santana was detained, searched and arrested. Guerrero’s initial entry into the hotel was omitted from the police report as well as his testimony at the May 5 hearing.

San Francisco Superior Court Judge Carol Yaggy dismissed the case against Santana May 5 after Sanchez did not show up to court, despite a subpoena requiring him to testify. Santana was prepared to take the stand and describe how supervising officer Sgt. Jacob Fegan instructed him where to sign a document at the police station, despite Santana’s pleas that he could not read the form. The document turned out to be a consent form to search his residence.

“We’ve yet to run across a single video that matches up with what police swear to in their report,” Gonzalez said. Adachi and Gonzalez have also called upon the Board of Supervisors to draft legislation outlawing the use of residential hotel master keys by police.

Officers involved in the Dec. 30 arrest are Ricardo Guerrero, Reynaldo Vargas, Jacob Fegan, Peter Richardson, Robert Sanchez and Kevin Healy. In 2009, Guerrero was the subject of a New York Times article that identified him as one of the highest-paid police officers in San Francisco. Guerrero earned $223,170 in 2008, according to the New York Times.

A troubling surveillance video released by the Public Defender Jeff Adachi May 11 reveals San Francisco Police Department officers physically attacking a bystander after illegally searching the room of a residential hotel resident and appearing to steal his property.

0:19 Guerrero goes to second, third and fourth floor of hotel.

1:54 Officers pass front desk and one briefly flashes a badge.

2:22 Client enters lobby and is handcuffed.

4:21 Handcuffed client is led to room and officers search room.

6:36 Friend of client’s stops by room and is choked and searched by police.

9:08 Guerrero exits room with client’s bag (not listed in police property list) and walks down hall.