To NATO’s rocket attack on Tripoli last night, McKinney cries, ‘Stop bombing Africa and the poor of the world!’ 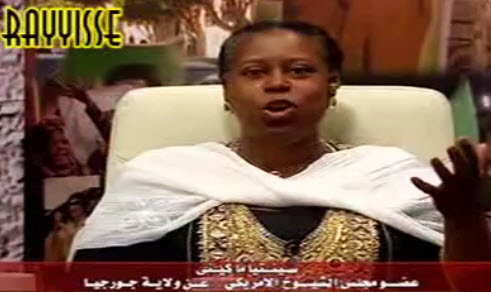 While serving on the House International Relations Committee from 1993 to 2003, it became clear to me that the North Atlantic Treaty Organization (NATO) was an anachronism. Founded in 1945 at the end of World War II, NATO was founded by the United States in response to the Soviet Union’s survival as a Communist state. NATO was the U.S. insurance policy that capitalist ownership and domination of European, Asian and African economies would continue. This also would ensure the survival of the then-extant global apartheid.

NATO is a collective security pact wherein member states pledge that an attack upon one is an attack against all. Therefore, should the Soviet Union have attacked any European member state, the United States military shield would be activated. The Soviet response was the Warsaw Pact that maintained a “cordon sanitaire” around the Russian heartland should NATO ever attack.

Thus, the world was broken into blocs, which gave rise to the “Cold War.” Avowed “Cold Warriors” of today still view the world in these terms and, unfortunately, cannot move past Communist China and an amputated Soviet empire as enemy states of the U.S. whose moves anywhere on the planet are to be contested.

The collapse of the Soviet Union provided an accelerated opportunity to exert U.S. hegemony in an area of previous Russian influence. Africa and the Eurasian landmass containing former Soviet satellite states and Afghanistan and Pakistan along with the many other “stans” of the region have always factored prominently in the theories of “containment” or “rollback” guiding U.S. policy up to today.

With that as background, last night’s NATO rocket attack on Tripoli is inexplicable. A civilian metropolitan area of around 2 million people, Tripoli sustained 22 to 25 bombings last night, rattling and breaking windows and glass and shaking the foundation of my hotel.

A civilian metropolitan area of around 2 million people, Tripoli sustained 22 to 25 bombings last night, rattling and breaking windows and glass and shaking the foundation of my hotel.

I left my room at the Rexis Al Nasr Hotel and walked outside the hotel and I could smell the exploded bombs. There were local people everywhere milling with foreign journalists from around the world. As we stood there, more bombs struck around the city. The sky flashed red with explosions and more rockets from NATO jets cut through low clouds before exploding.

I could taste the thick dust stirred up by the exploded bombs. I immediately thought about the depleted uranium munitions reportedly being used here – along with white phosphorus. If depleted uranium weapons were being used, what effect on the local civilians?

Women carrying young children ran out of the hotel. Others ran to wash the dust from their eyes. With sirens blaring, emergency vehicles made their way to the scene of the attack. Car alarms, set off by the repeated blasts, could be heard underneath the defiant chants of the people.

Sporadic gunfire broke out and it seemed everywhere around me. Euronews showed video of nurses and doctors chanting even at the hospitals as they treated those injured from NATO’s latest installation of shock and awe. Suddenly, the streets around my hotel became full of chanting people, car horns blowing. I could not tell how many were walking, how many were driving. 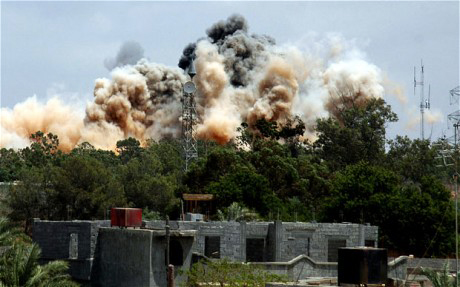 Inside the hotel, one Libyan woman carrying a baby came to me and asked me why are they doing this to us?

Whatever the military objectives of the attack – and I and many others question the military value of these attacks – the fact remains the air attack was launched a major city packed with hundreds of thousands of civilians.

I did wonder too if the any of the politicians who had authorized this air attack had themselves ever been on the receiving end of laser guided depleted uranium munitions. Had they ever seen the awful damage that these weapons do a city and its population? Perhaps if they’d actually been in the city under air attack and felt the concussion from these bombs and seen the mayhem caused they just might not be so inclined to authorize an attack on a civilian population.

Only the day before, at a women’s event in Tripoli, one woman came up to me with tears in her eyes: Her mother is in Benghazi and she can’t get back to see if her mother is OK or not. People from the east and west of the country lived with each other, loved each other, intermarried, and now, because of NATO’s “humanitarian intervention,” artificial divisions are becoming hardened.

NATO’s recruitment of allies in eastern Libya smacks of the same strain of cold warriorism that sought to assassinate Fidel Castro and overthrow the Cuban Revolution with “homegrown” Cubans willing to commit acts of terror against their former home country.

More recently, Democratic Republic of Congo has been amputated de facto after Laurent Kabila refused a request from the Clinton administration to formally shave off the eastern part of his country. Laurent Kabila personally recounted the meeting at which this request and refusal were delivered. This plan to balkanize and amputate an African country – as has been done in Sudan – did not work because Kabila said “no” while Congolese around the world organized to protect the “territorial integrity” of their country.

I was horrified to learn that NATO allies – the Rebels – in Libya have reportedly lynched, butchered and then killed their darker-skinned compatriots after U.S. press reports labeled Black Libyans as “Black mercenaries.” Now, tell me this – pray tell: How are you going to take Blacks out of Africa? Press reports have suggested that Americans were “surprised” to see dark-skinned people in Africa. Now, what does that tell us about them?

The sad fact, however, is that it is the Libyans themselves who have been insulted, terrorized, lynched and murdered as a result of the press reports that hyper-sensationalized this base ignorance. Who will be held accountable for the lives lost in the bloodletting frenzy unleashed as a result of these lies?

Which brings me back to the lady’s question: Why is this happening? Honestly, I could not give her the educated, reasoned response that she was looking for. In my view the international public is struggling to answer “Why?”

What we do know, and what is quite clear, is this: What I experienced last night is no “humanitarian intervention.”

What I experienced last night is no “humanitarian intervention.”

Many suspect it is about all the oil under Libya. Call me skeptical but I have to wonder why the combined armed sea, land and air forces of NATO and the U.S., costing billions of dollars, are being arraigned against a relatively small North African country and we’re expected to believe it’s in the defense of democracy.

What is most sad is that I cannot give a cogent explanation of why to people now terrified by NATO’s bombs, but it is transparently clear now that NATO has exceeded its mandate, lied about its intentions, is guilty of extra-judicial killings – all in the name of “humanitarian intervention.” Where is the Congress as the president exceeds his war-making authority? Where is the “conscience of the Congress?”

NATO has exceeded its mandate, lied about its intentions, is guilty of extra-judicial killings – all in the name of “humanitarian intervention.” Where is the Congress as the president exceeds his war-making authority? Where is the “conscience of the Congress?”

For those of you who disagree with Dick Cheney’s warning to us to prepare for war for the next generation, please support anyone who will stop this madness. Please organize and then vote for peace. People around the world need us to stand up and speak out for ourselves and for them because Iran and Venezuela are also in the cross-hairs.

Libyans don’t need NATO helicopter gunships, smart bombs, cruise missiles and depleted uranium to settle their differences. NATO’s “humanitarian intervention” needs to be exposed for what it is with the bright, shining light of the truth.

As dusk descends on Tripoli, let me prepare myself with the local civilian population for some more NATO humanitarianism.

Stop bombing Africa and the poor of the world!

by the CNN Wire Staff

(CNN) May 22, 2011 – A former U.S. congresswoman slammed U.S. policy on Libyan state TV late Saturday and stressed the “last thing we need to do is spend money on death, destruction and war.”

The station is fiercely loyal to Moammar Gadhafi and her interview was spliced with what appeared to be rallies in support of the embattled Libyan leader.

“It’s important that people all over the world see the truth. And that is why I am here … to understand the truth,” former Rep. Cynthia McKinney said.

She said she was invited to Libya by the “nongovernmental organization for fact-finding,” adding that she intends to bring more people to the country soon so that “they too can understand.”

NATO warplanes have been pounding military targets since March after the U.N. Security Council approved a resolution to protect civilians by any means necessary, as Gadhafi’s forces try to quash a nearly three-month revolt against the leader’s roughly 42 years of rule.

Gadhafi’s government has repeatedly urged the international community to send fact-finding teams to Libya to report what’s happening on the ground.

At one point during the interview, state TV cut to what it said were live airstrikes, hitting Gadhafi’s compound.

“Is that a bomb?” McKinney asked.

“I want to say categorically and very clearly that these policies of war … are not what the people of the United States stand for, and it’s not what African-Americans stand for,” she told state TV.

“These policies of war … are not what the people of the United States stand for, and it’s not what African-Americans stand for.”

The former Georgia representative also slammed the economic policies of U.S. President Barack Obama and said the government of the United States no longer represents the interests of the American people.

“Under the economic policies of the Obama administration, those who have the least are losing the most. And those who have the most are getting even more,” she said. “The situation in the United States is becoming more dire for average ordinary Americans, and the last thing we need to do is to spend money on death, destruction and war.”

Separately, McKinney appeared on state-run Press TV this week in Iran. She was reported to be in Tehran attending the International Conference on Global Alliance Against Terrorism for a Just Peace.