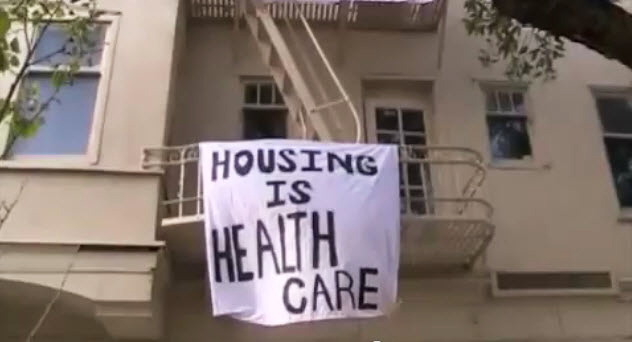 On Monday, April 11, in San Francisco, I felt it was not a romantic notion that my videographer Scott and I were embedded among partisan guerrillas deep in enemy territory. We were all joined together in a viciously difficult corporate class war.

We met our band of occupiers and their supporters, from teens to elders, at the Panhandle tennis courts where SFPD squad cars lurked in the parking lot. Matt Crain, Homes Not Jails member and spokesperson, clarified the purpose of this day’s action.

“We are gathering here for a brief rally before we march through the Haight into the Western Addition to draw awareness to an apartment complex where the owner chooses to keep the place vacant and waste a resource as valuable as housing.”

The owner turned out to be the Kaiser Permanente health care corporation.

“Most folks don’t know that there are 30,000 vacant homes here in San Francisco,” said Matt, while 6,000 to 9,000 San Franciscans suffer homelessness.

Empty buildings are not the Kaiser Corporation’s only assaults on public health.

By the 1970s, Edgar Kaiser’s Kaiser Permanente health care health maintenance organizations had metastasized throughout California. Kaiser is now inextricably linked through business connections to a network of multinational corporations.

Political analysts point out that these globally connected corporations no longer owe allegiance to the United States. Their CEOs live outside the U.S. raking profits off the global economic meltdown caused by U.S. banks and Wall Street. U.S. home foreclosures caused by this crisis are creating an exponential increase in homelessness.

This tiny band of San Francisco protestors is up against a colossus. As a lone guerilla group fighting against a powerful global force, these occupiers are modern day Partisan revolutionaries – David to a multinational corporate Goliath.

As one organizer stated, the world’s resources are finite. The idea any one person deserves to hoard and consume more resources than all others is absurd. When residential housing sits vacant solely to benefit a few, people recognize that is unacceptable. He believes at the point of maximum group frustration, people will resist, rise up, recapture resources and return them to the community.

His certainty that resistance will inevitably succeed seems borne out by the peoples’ revolutions cascading across the globe from North Africa to Wisconsin, Michigan, Ohio and Washington. Even the school girls, Sarah, 16, and Zoe, 18, who I met in Golden Gate Park, knew that the 400 families hoarding the nation’s wealth can’t shore up the current system.

However, the slaughter of Yemenis and Syrians, so desperate they die protesting despots and demanding democracy, attests to a powerful multinational counter-resistance. Nevertheless, he insists that, since the monolith will crash, we must “keep people planning how to reduce the amount of suffering.” But, he added, “The sooner we start bringing it down, the better.”

The action’s organizers come from the grand tradition of partisan revolutionaries. Like any band of French or Russian Nazi-resistors, they sped off billowing liberation banners – a swift, tiny platoon commandeering San Francisco streets on their way to take over a vacant Kaiser Permanente corporation building at the corner of O’Farrell and Divisadero streets.

Scott floated a boom over heads capturing a rapid march out of the Haight with its “summer-of-love” turned “get-these-punks out-of-my-upper-crust-neighborhood” attitude.

North along the Divisadero corridor, poet Dee Allen’s strong voice cadenced, “Homelessness is not a crime! Corporations are filled with crime.” Organizer Jeremy Miller pointed an accusing finger at wasted, unoccupied buildings near the shut down gas station on the Fell Street corner.

Halfway through the following video, the group stops in front of a theater. A marcher announces he was 10 when this large structure was shut down. He’s now 17. Ten years ago, that building housed a black church. On the outside were painted Black Power murals so beautiful that the Nash Bridges TV series, starring Don Johnson and Cheech Marin, featured them in one episode.

Indicating the empty Kaiser Permanente building “down there at O’Farrell,” I informed interested neighbors and business people of the takeover.

Resisters enter, occupy the premises, and, believing that housing is a human right and not a free market commodity that a few hoard for profit, symbolically return it to people who need it.

At McAllister Street, I passed three pre-teens. One girl smiled up, “Who are those people?” They are saying the empty buildings around here could house all the homeless people, I told her.

“It’s not right to have homeless people,” she mused. “They should have houses. I’m going to the store for my mom. I wish I could march, too.”

The march reached Divisadero and O’Farrell. I entered the empty building with the group. An SFPD officer slammed and locked the yellow door behind us, plunging us into blackness.

A hand guided me carefully up a flight of stairs through dark rooms faintly lit at bay windows opening out to the street. Silhouettes wandered happily about greeting in excited camaraderie.

Matt met us in the foyer. “If you go straight down here, you’ll see light on your right hand side, and that light leads to the main lobby, which has a stairwell going upstairs.”

“It’s huge!” someone exclaimed. It was large, but not as large as the 40-unit Leslie Hotel occupied previously. Floor plans showed researchers ground floor commercial space containing a beauty shop and grocery store. About 20 residential units of studio and one-bedroom apartments housed families on higher floors. A man I later met in the Walgreens on the corner said he recalled the eviction years before.

“This is a cozy little place. Quite cozy.”

“There are dozens of pigeons living in here!”

“Did you evict the pigeons?” “The squatters did.”

“Did you eat all the pigeons?”

Occupiers are an ever-evolving group of coalitions with names like Creative Housing Liberation, Homes Not Jails, and Food Not Bombs.

For this particular action, Homes Not Jails posted a Facebook press release with a place and time for the Panhandle gathering, but NOT the occupation location. An ad also appeared in the Coalition on Homelessness’ newspaper, The Street Sheet.

On the demonstration day, participants made three huge banners for the march and, reaching the site, hung them out the window where they cascaded down the facade. The signs read: “Hella Occupied,” “Kaiser Thrives, People Die” and “Homes Not Jails.”

Occupiers gather at a central location. Often, police and media, alerted by a press release, arrive beforehand and follow marchers to the site.

Before each action, researchers check public records, scout locations and find their way into empty buildings.

Once inside, they make certain the place is safe and secure. They check meticulously for broken stairs, boards with nails, wiring, electricity, water. The public cannot be brought into an unsafe building. For security, they make sure to note entrances, exits, windows and escape routes.

One participant said many marches are timed to reach the vacant building after 5-6 p.m. The reason is that it’s harder for the police to reach the landlord after the close of business. The police can’t throw out occupiers without the landlord’s eviction notice.

Their goal is to stay in the building as long as possible for maximum media exposure. On this particular day, vans from local TV channels 2, 5 and 7 were parked at the site while reporters interviewed demonstrators in the street.

Total occupation time was 33 hours with an average time of 32 hours.

Open occupations constitute a public demonstration of a direct action in which the participants are willing to be arrested for civil disobedience. Some wear the arrest as a badge of honor.

Aaron Buchbinder, the march’s legal observer, was there to monitor potential police-protestor conflict. He called on San Franciscans concerned about social change to participate more often in civil disobedience, a powerful form of protest.

Bob Offer-Westort of the Coalition on Homelessness laid mad kudos on partisans who, from April 2010 to 2011, achieved five rapid-fire occupations. These takeovers, he said, “have been pretty ingenious.”

On May Day 2010, Homes Not Jails took over the seven-years-vacant Phoenix School at 15th and Mission to focus public attention on large, unused empty buildings.

On Sunday, Oct. 10, 2010, the Leslie Hotel takeover at 587 Eddy St. in the Tenderloin highlighted World Homeless Day and the sit/lie law’s criminalization of homelessness.

At the fourth occupation, this one on April 11, 2011, Scott guided me up a staircase through a bright door to the the roof’s blue sky. The view impressed Berkeley occupier Crusty Shackleford: “In an hour and a half the sun will set. It’s going to get all pink, and the reflection is going to get on the buildings. Bay Area sunsets are the best.”

Occupier Linda, Los Angeles family abuse runaway, underage in squats during San Francisco’s early punk scene, suffered “horrible things to survive.” Since she nearly died homeless, she wanted to support the occupation. Now 45, after living 20 years in London, where squatting is legal, she does permaculture and tends horses and chickens with her partner on a Redwood Valley ranch.

We four stood at the pinnacle of Kaiser Permanente, corporate behemoth, on a rooftop of an empty building from which someone, probably homeless, was evicted drying out. In a dusty bedroom drawer, Scott had found the 12-step book, “Getting Sober.”

On a Feb. 17, 1971, Nixon tape, Watergate plumber John Erlichman told Nixon: “Edgar is running this [health maintenance organization] for profit. He can do it [because] the incentives are for less medical care, because the less care they give ‘em, the more money they make.”

“I like it,” Nixon answered, and on Feb. 18, he gave a speech proposing HMOs, “a new national health strategy,” to the American people.

We descended to the street. Surrounded by cops, media trucks and people, a large crowd chanted and listened to poetry and music.

To much enthusiastic clapping, Dee Allen performed his poem, “Shelter.”

Down to the stairs & floors 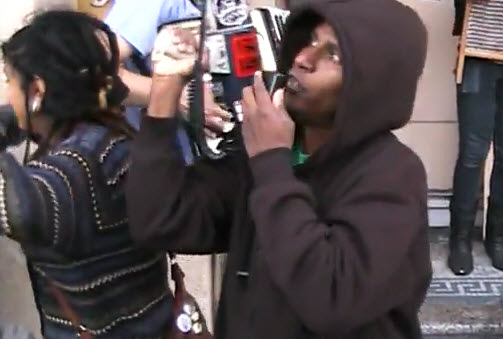 Emptier than a tomb

While a sickened man sleeps outside

The cold, hard sidewalk against his back –

The Homeless People, a washboard accordion band, delivered a haunting arrangement of Leonard Cohen’s song, “The Partisan.” The slow cadence and washboard thumping echoed plodding hooves as the partisan was hunted toward death by the powerful army he resisted.

An old woman gave us shelter,

kept us hidden in the garret,

then the soldiers came;

she died without a whisper.

Oh, the wind, the wind is blowing,

through the graves the wind is blowing,

then we’ll come from the shadows.

When wellness is based on a home, a health care corporation leaving a building empty is a savagely hypocritical act.

In a final bullhorn blast, Jeremy Miller announced to demonstrators, occupiers and passersby, “The fact that anyone should be forced to remain without shelter is criminal, is wrong and is a situation that we will resolve if the powers that be refuse to.”