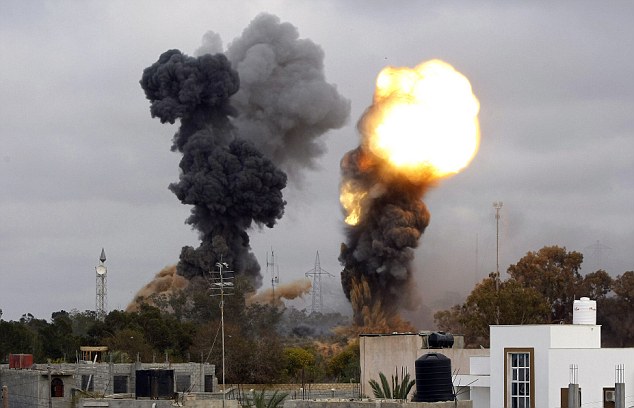 Mathaba has learned that the African Union is intending to pull out of the United Nations Organization unless NATO stops bombing fellow AU member, Libya.

The African Union is also demanding a United Nations Security Council seat and the removal of both France and Britain as permanent Security Council members and replacing them with one European Union representative or Germany.

The African Union is also lobbying the Non-Aligned Movement (NAM) as well as the Organization of the Islamic Conference’s (OIC) non-Arab members for support.

South America and the powerful BRICS alliance – i.e., Brazil, Russia, India, China and South Africa – are likely to either support or refrain from opposing the African Union with which they have good and respectful relations.

The conflict against Libya has pitted white, racist, former colonial powers Britain, France, Italy, Belgium and Holland against Africa’s gateway and crown, its longest northern shoreline and most powerful and wealthy state, Libya.

The United States of America, which is in economic meltdown, has spearheaded the attack on Libya, with Obama having come under unprecedented attack from Africans and African Americans for allowing himself to serve a resource grab on Africa.

Mathaba analysts have already warned of the outbreak of World War III due to rapidly developing fault lines and the breakdown of law and order in the international arena with several NATO states and allies having recognized terrorists in lieu of the Libyan government.

At a meeting between the U.N. Security Council and the African Union High Level Ad hoc Committee on Libya on June 15, Dr. Ruhakana Rugunda, Uganda’s permanent representative to the United Nations, gave the African Union’s stand on NATO’s invasion of Libya. Below is the full statement:

1. Thank you for organizing this interactive dialogue. It is good that the United Nations Security Council has met the African Union Mediation Committee, High-Level Ad hoc Committee on Libya, so that we can exchange views on the situation in Libya in a candid manner. This should have happened much earlier because Libya is a founding member of the AU.

An attack on Libya or any other member of the AU without express agreement by the AU is a dangerous provocation that should be avoided given the relaxed international situation in the last 20 years since the release of Nelson Mandela from jail and the eventual freedom of South Africa.

2. The U.N. is on safer ground if it confines itself on maintaining international peace and deterring war among member states.

3. Intervening in internal affairs of states should be avoided except where there is proof of genocide or imminent genocide as happened in Rwanda or against the Jews in Germany and the European countries that were occupied by the Third Reich.

4. There are differences on the issue of Libya as to whether there was proof of genocide or intended genocide. Fighting between government troops and armed insurrectionists is not genocide. It is civil war. It is the attack on unarmed civilians with the aim of exterminating a particular group that is genocide. Genocide is to exterminate the genes of targeted groups such as the Jews, Tutsis, [Hutus] etc. It is wrong to characterize every violence as genocide or imminent genocide so as to use it as a pretext for the undermining of the sovereignty of states.

Certainly, sovereignty has been a tool of emancipation of the peoples of Africa, who are beginning to chart transformational paths for most of the African countries after centuries of predation by the slave trade, colonialism and neo-colonialism.

Careless assaults on the sovereignty of African countries are, therefore, tantamount to inflicting fresh wounds on the destiny of the African peoples. If foreign invasions, meddlings, interventions etc., were a source of prosperity, Africa would be the richest continent in the world because we have had all versions of all of that: slave trade, colonialism and neo-colonialism. Yet, Africa has been the most wretched on account of that foreign meddling.

5. Whatever the genesis of the intervention by NATO in Libya, the AU called for dialogue before the U.N. resolutions 1970 and 1973 and after those resolutions.

Ignoring the AU for three months and going on with the bombings of the sacred land of Africa has been high-handed, arrogant and provocative. This is something that should not be sustained.

To a discerning mind, such a course is dangerous. It is unwise for certain players to be intoxicated with technological superiority and begin to think they alone can alter the course of human history towards freedom for the whole of mankind. Certainly, no constellation of states should think that they can recreate hegemony over Africa.

6. The safer way is to use the ability to talk in order to resolve all problems.

Ignoring the AU for three months and going on with the bombings of the sacred land of Africa has been high-handed, arrogant and provocative.

7. The U.N. or anybody acting on behalf of the U.N. must be neutral in relation to the internal affairs of states. Certainly, that should be the case with respect to African countries. The U.N. should not take sides in a civil war. The U.N. should promote dialogue, peaceful resolution of conflicts and help in enforcing agreements arrived at after negotiations, such as the agreement on the Sudan.

8. Regardless of the genesis of the Libyan problem, the correct way forward now is dialogue without pre-conditions. The demand by some countries that Col. Muammar Qaddafi must go before the dialogue is incorrect. Whether Qaddafi goes or stays is a matter for the Libyan people to decide. It is particularly wrong when the demand for Qaddafi’s departure is made by outsiders.

9. In order for dialogue without pre-conditions to take place, we need a ceasefire in place that should be monitored by the AU troops, among others. This will help the AU to confirm the veracity of the stories of Qaddafi killing civilians intentionally.

10. That dialogue should agree on the way forward in the direction of introducing competitive politics. Qaddafi thinks he has the most democratic system in the world of people’s authority, elected local committees. Since so much chaos in Libya has emerged on the issue, Qaddafi should see the wisdom of accepting competitive democracy.

Qaddafi cannot ignore the fact that the rebels took over Benghazi and his authority melted away before NATO came in to confuse the picture. The pre-NATO uprising in Benghazi was, mainly, internal. Qaddafi may say that they were organized by Al Qaeda. Even if that is so, it is a fact that some Libyans in Benghazi threw out Qaddafi’s authority. Therefore, Qaddafi must think of and agree to reforms resulting in competitive politics.

11. A transitional mechanism could then be worked out and competitive elections would take place after an agreed timetable.

12. What about security for the opposition members? We have plenty of experience on such issues. What did we do in Burundi? We provided a protection force, a brigade, for the Hutu leaders who were living outside Burundi or were in the bush. One of them is now the president of Burundi after winning democratic elections.

13. How about those who are alleged to have committed war crimes including Qaddafi and the rebels? Again, our decision in Burundi is useful here. We used the concept of “immunité provisoire,” provisional immunity, for all the stakeholders so that they could participate in the dialogue. After peace is realized, a truth and reconciliation body could be set up to look into these matters. After democratic elections, trials of guilty parties can take place.

14. Longterm safety of everybody can be ensured by security sector reform and especially reform of the army, so that it takes orders from any elected president.

15. The intervention in Libya was premised on the basis of protecting civilians and preventing further civilian deaths. However, the humanitarian situation in Libya remains serious and continues to get worse with continued hostilities.

Looking at how resolutions 1970 and 1973 are being implemented, the international community and the United Nations in particular are being severely put to the test, as what is happening in Libya will undermine future efforts of the U.N. in the protection of civilians. There is, therefore, no need for any warlike activities in Libya because there is a peaceful way forward.

There has been no need for these war activities ever since Qaddafi accepted dialogue when the AU Mediation Committee visited Tripoli on April 10, 2011. Any war activities after that have been provocation for Africa. It is an unnecessary war. It must stop.

16. The story that the rebels cannot engage in dialogue unless Qaddafi goes away does not convince us. If they do not want dialogue, then let them fight their war with Qaddafi without NATO bombing. Then, eventually, a modus vivendus will emerge between the two parties or one of them will be defeated. The attitude of the rebels shows us the danger of external involvement in internal affairs of African countries.

The externally sponsored groups neglect dialogue and building internal consensus and, instead, concentrate on winning external patrons. This cannot be in the interest of that country. Mobutu’s Congo as well as performance of all the other neo-colonies of Africa in the 1960s, 1970s, 1980s and their eventual collapse in the 1990s prove that foreign sponsored groups are of no value to Africa.

There has been no need for these war activities ever since Qaddafi accepted dialogue when the AU Mediation Committee visited Tripoli on April 10, 2011. Any war activities after that have been provocation for Africa. It is an unnecessary war. It must stop.

17. It is essential that the U.N. Security Council work with the African Union to ensure that a ceasefire is immediately established with an effective and verifiable monitoring mechanism and dialogue embarked upon, leading to a political process including transitional arrangements and the necessary reforms. The crisis in Libya requires a political solution and not a military one. The AU Road Map is the most viable option.

Finally, what is needed on the issue of Libya is a genuine partnership between the United Nations Security Council and the African Union. By working together we can find a lasting solution to the crisis in Libya.