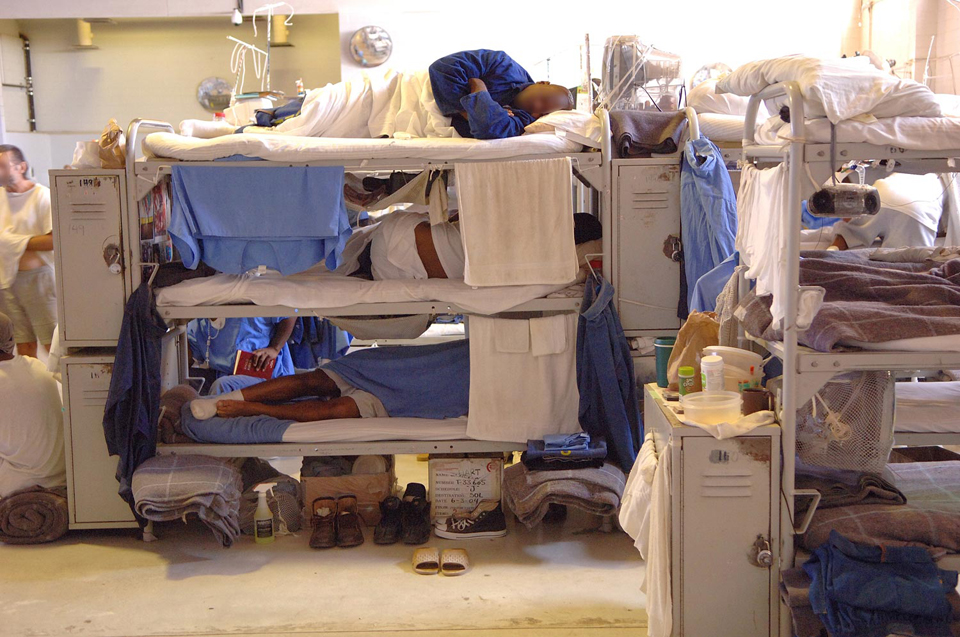 On May 23, the U.S. Supreme Court handed down a 5-4 decision ordering California to release tens of thousands of inmates from its overcrowded prisons on the grounds that their living conditions – including lethally inadequate healthcare – were so intolerable as to be “cruel and unusual punishment.” For years California has stored its prisoners like so many cans of soup: stacked in cells or bunk beds in squalid conditions that breed violence and disease.

A 2008 NPR (National Public Radio) report on massive overcrowding at San Quentin State Prison found 360 men caged in what was once a gymnasium: “Most of these men spend 24 hours a day, seven days a week in the gym,” NPR reported, describing it as “a giant game of survivor.” The day before the Supreme Court ruling, four prisoners were seriously injured at San Quentin when a riot broke out in a dining hall.

Prison numbers have dipped in recent years, but with nearly 2.4 million Americans behind bars, mass incarceration remains a national crisis. In California, home of a notorious “three strikes” law, parole violations represent more than half of all new prison admissions and three of four prisoners are non-white. It’s an extreme example of what has happened across the country.

Michelle Alexander, a former ACLU lawyer in the Bay Area and author of “The New Jim Crow: Mass Incarceration in the Age of Colorblindness,” has pointed out that the rush to incarcerate has gotten so out of control that “if our nation were to return to the rates of incarceration we had in the 1970s, we would have to release four out of five people behind bars.” Arriving in California for a series of events just after the decision came down, Alexander spoke to me over the phone about the ruling and what it means. 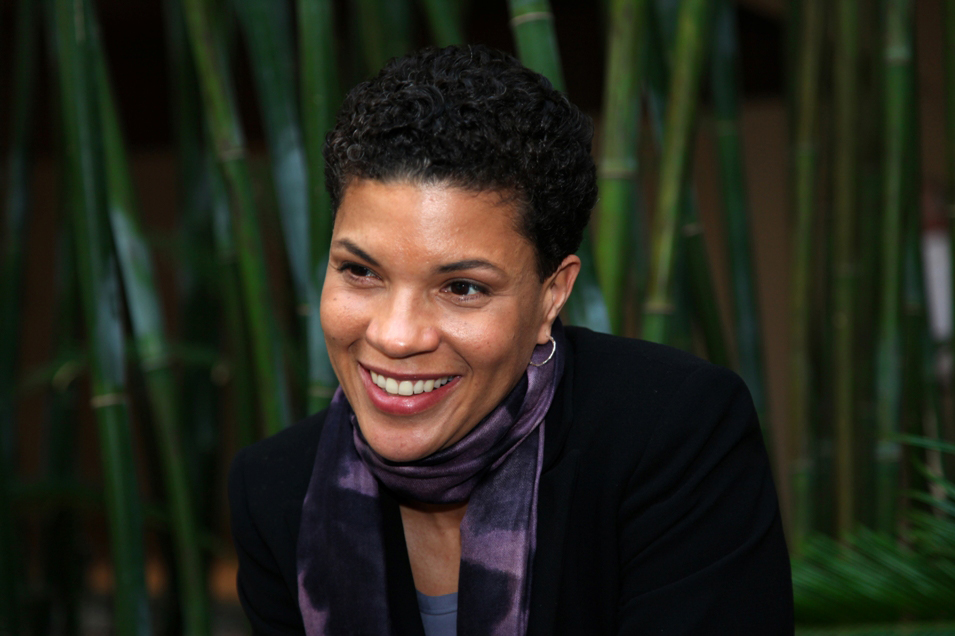 Liliana Segura: What has the response been in California to this ruling?

Michelle Alexander: I have seen a fair amount of fear-mongering in the media here. At least one law enforcement official [Mark Pazin, the Merced County sheriff and chairman of the state’s sheriffs’ association] was saying that he was worried that there would be a “tsunami” of crime that would wash over communities in California. “We’re bracing for the worst and hoping for the best,” he says, projecting to the public that they ought to be very worried that all of these criminals busting loose from prison may well wreak havoc on their communities.

What is most disturbing to me about this rhetoric is that it fails to acknowledge that all of these people were coming home anyway. It creates the impression that people who are returning home to these communities wouldn’t have been but for the Supreme Court ruling.

And if there’s any reason to be concerned about potential crime when they return, it’s largely due to the legal barriers that exist to effective re-entry into communities. People return home from prison and face legal discrimination in virtually all areas of social, economic and political life. They are legally discriminated against in matters of employment, barred from public housing and denied other public benefits.

Liliana Segura: Gov. Jerry Brown has planned to address California’s budget issues by transferring a bunch of state prisoners to county jails, and the head of the California corrections system says that “our goal is not to release inmates at all.” Part of what is interesting about this decision is that Justice Anthony Kennedy mentioned the “lack of political will in favor of reform.” Is it always going to be politics that stalls even incremental changes?

Michelle Alexander: I think this opinion illustrates how broken our politics have become. Here we are in California, a state that has been careening toward bankruptcy, and yet there is enormous resistance to releasing non-violent, relatively minor offenders. People who, I think it’s important to emphasize, might not have been doing time at all if they had been arrested 30 years ago.

We now sentence people to prison for years for types of offenses that once received just probation or days in jail. So these people who we’re so afraid of returning to our communities might well not have been serving time at all had they been arrested a few decades ago, before the “War on Drugs” and “Get Tough” movement really kicked off.

Liliana Segura: Activists often say that real change is not going to come from the courts. On the other hand, some have described this decision as quite momentous. Jonathan Simon, a law professor at Berkeley, wrote, “This is the first decision to move beyond evaluating prison conditions to place mass incarceration itself on trial.” How significant is this decision and what are the implications beyond California?

Michelle Alexander: I think it is a very significant decision although, as a number of commentators have observed, there’s not likely to be a lot of copycat litigation because the conditions in California were so extreme. You had documented cases of people dying on a weekly or monthly basis simply because of inadequate access to healthcare. But that isn’t to minimize the significance of the decision. It does signal that mass incarceration has become unmanageable for states that are facing severe economic crises.

Though I think it’s important to note that Justice Kennedy hinted that if California just built more prisons, then the Eighth Amendment would not be violated here. But because it can’t afford to do so, it must begin releasing some people. But once states can afford again to lock people up en masse, there’s nothing in this decision that precludes mass incarceration. What it precludes is such severe overcrowding that it literally threatens the lives of the inmates that are housed there. And the amount of reduction that is called for in the opinion isn’t that dramatic. Which is why some officials are arguing: “Oh, well, maybe we can absorb those who are ordered released from prison in other ways.” If they find a way to do that, then the practical impact of the decision will be minimal.

The Supreme Court has stood quietly by in the era of mass incarceration. And in fact, to the extent that they’ve raised their voices at all, it has only been to facilitate the “War on Drugs.” The U.S. Supreme Court has eviscerated Fourth Amendment protections against unreasonable searches and seizures, giving the police license to sweep communities and to conduct “stop and frisk” operations.

Once states can afford again to lock people up en masse, there’s nothing in this decision that precludes mass incarceration.

The Supreme Court has made it nearly impossible to prove race discrimination in the criminal justice system. Only now that states are faced with such severe economic crises that they are unable to build enough prisons to house inmates without risking their lives does the Supreme Court step in and say: “Well, if you can’t afford to build more prisons, then you’re going to have to start releasing some people.”

I think what’s clear here is that it’s going to take a grassroots movement to force politicians to respond rationally to problems related to crime and mass incarceration. This economic crisis does create an important window for advocacy – and advocates should seize this moment of opportunity – but they must do so in a way that builds a grassroots movement for the end of a system as a whole.

Liliana Segura: The thought of creating that movement becomes very daunting when you consider the average American’s perception of prisoners. How do we convince people that prisoners deserve basic rights and that this should be an issue we should organize around?

Michelle Alexander: I think one of the biggest barriers to movement-building today is that there’s so much myth about crime and the reasons for the explosion of our prison population. There must be major education to dispel the myths that sustain the system. The myth that explosion has been driven by crime rates: It’s not true. The myth that the war on drugs has been aimed at rooting out violent offenders and drug kingpins: not true. The myth that poor folks of color are more likely to use and sell illegal drugs than white folks: not true. There really has to be an effort in schools and churches and mosques and community centers to engage in the kind of consciousness-raising that will open up a political space in which movement-building work can be possible.

The other front of the work that has to be developed is how to move beyond this piecemeal policy reform work that has been done over the last 30 years to work that is more transformative so that we’re not just tinkering with the system but instead are galvanizing a grassroots movement, one that is contagious and can be replicated in cities and communities nationwide.

I believe it’s possible. The same way that many people said, “Oh, Jim Crow is never going to die,” it’s too deeply entrenched. I believe it is possible to bring an end to mass incarceration and birth a new moral consensus about how we ought to be responding to poor folks of color and a consensus in support of basic human rights for all. But it is going to take some work.

Liliana Segura is associate editor of The Nation, where this story first appeared. She also writes about prisons and harsh sentencing. Follow her on Twitter at @lilianasegura.